Ever since Ashley Graham graced the cover of the Sports Illustrated Swimsuit 2017 Issue, there’s been an increasing belief that the fashion world’s concept of beauty is moving beyond the unhealthy realm of the excessively slim. But a recent Instagram post by professional model Ulrikke Louise Lahn Høyer shows we still have a long way to go.

On Thursday, the 20-year-old Danish model took to Instagram to post about an unfortunate experience that she had while in Japan to appear in a Louis Vuitton cruise show in Kyoto. According to Hoyer, she was fired from the show for being “too big,” despite being a petite size 34 (a size 4 in U.S. terms).

I just returned from Tokyo/Japan, where Louis Vuitton held a beautiful cruise show in Kyoto, I just never made it to Kyoto cause I was canceled for the show due to being ‘too big’. (I’m a size 34-36) Ashley Brokaw’s caster Alexia had said that there had been some problems during the fitting. According to her I had “a very bloated stomach”, “bloated face”, and urged me to starve myself with this statement “Ulrikke needs to drink only water for the next 24 hours”. I was shocked when I heard it. I woke up at 2am and was extremely hungry. The breakfast started at 6:30am – I had the absolute minimum. I was afraid to meet Alexia so my luck she didn’t arrive until 8am, when my plate was taken off the table. She said good morning to me and the other girls and looked at me, then down on my non-existent plate and up at me again. She was checking if I had been eating food. At 7pm my mother agent from Denmark called my to tell the sad news that Louis Vuitton had chosen to cancel me from the show without the refitting and that I was going to be sent back home. Not only did I have a belly, my face was puffy now also my back was a problem. I am glad I’m 20 years old with an elite sports background and not a 15 year old girl, who are new to this and unsure about herself, because I have no doubt that I would then have ended up very sick and scarred long into my adult life. TO READ THE FULL STORY CLICK IN MY BIO!!!!!!! #LVCruise2018 #mistreatmentofmodels #AshleyBrokaw #thefutureisfemale #sowhyeatingdisorders #youknowitstrue #shareifyoucare #jamespscully

Hoyer claims the caster, Alexia Cheval, said she had “a very bloated stomach” and “bloated face,” and as such needed “to drink only for the next 24 hours.” Clearly, this is forced starvation, but the fat-shaming ordeal didn’t end there.

When she woke up at 6:30 am, ferociously hungry, she had “the absolute minimum” at breakfast with the other models. When Alexia arrived, she “looked at me, then down on my non-existent plate and up at me again,” to check to see if the Hoyer had eaten any food.

That evening, she was told that she had been canceled from the show and would be sent back home.

In a longer post on Facebook, Hoyer elaborated on this humiliating experience, and said that “the demands and expectations that is given to the high end fashion models in the industry are often completely unattainable and directly damaging to the human body.”

She recalled the number of times she would go to castings and see skeletal young girls, many of whom “don’t have their periods, and/or changes the color of their skin because of bad and incorrect nutrition and almost everyone have a completely distorted relationship with food,” and reproached the people in this industry that “find pleasure in power over young girls and will go to the extreme to force an eating disorder on you.”

Luckily, Hoyer, who came into the spotlight as a professional tennis player and actually made her modeling debut at a Louis Vuitton show, didn’t let this incident get her down. But she recognized that if she were a novice she would “have ended up very sick and scarred long into my adult life.” How many stories like this do we have to hear until this abuse stops?

Ulrikke Louise Lahn Høyer has not yet responded to a request for comment. 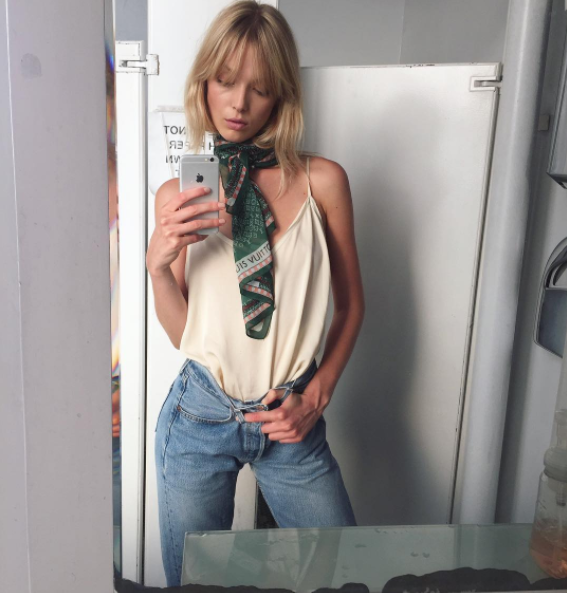