It’s hard to pick the most horrifying aspect of Gypsy Blanchard’s life, but it certainly isn’t the fact that she murdered her mother.

For years in a little pink house at the corner of Hope Road and Volunteer Way in Springfield, Missouri, and for the entirety of her life before that, Gypsy was made to be a prisoner inside of her own body. Her mother Dee Dee Blanchard told her and the world that Gypsy suffered from a laundry list of ailments, from epilepsy to muscular dystrophy, that left her wheelchair bound. Until the ghastly end, Gypsy and her doting mother were the poster child for virtually every organization that helps such needy families, from the Ronald McDonald House to Habitat for Humanity, who built their little pink abode.

Keeping up the ruse required incredible manipulation: lying to dozens of hospitals and individual physicians, confining Gypsy to a wheelchair, shaving Gypsy’s head, convincing doctors to perform extraneous surgeries, and force feeding Gypsy a slurry of dangerous medications through a feeding tube she did not need. In her elaborate scheme of Munchausen by proxy, Dee Dee Blanchard duped and defrauded countless organizations and individuals. Rolling Stone puts it less delicately: “petite and toothless, Gypsy Rose was her mother’s cash cow.” By the time Gypsy finally snapped and had her mother brutally stabbed to death by an internet boyfriend, an expert in Munchausen syndromes characterized Gypsy as exhibiting sociopathy and a limited capacity for reality testing. “When you look at this case, it’s a murder. And it’s a first-degree murder,” prosecutor Dan Patterson told the Springfield Newsleader. “But it’s also one of the most extraordinary and unusual cases we have seen.”

The details of Dee Dee’s and Gypsy’s life are grisly, and have been examined at length by talented reporters and in a new HBO Documentary by Erin Lee Carter, Mommy Dead and Dearest.

“Even after reading through all of the records and going back and compiling them to provide to Mr. Patterson [the district attorney], it was still difficult for me to read some of the things that I was reading,” Gypsy’s public defender Mike Stanfield told the Springfield Newsleader.

In the two years I’ve been following this case, I’ve certainly had more questions than answers. How could you do this to your child? How did only one doctor realize they were being duped? Why did none of the professionals trained to spot abuse and neglect — cops, Department of Children and Family Services representatives — ever dig beneath the rosy facade Dee Dee painted? Why did none of Dee Dee’s Louisiana family members, who in the video characterize her as “definitely an evil person,”  whose ashes her own father suggested should be flushed down the toilet, ever do anything?

Springfield, where Dee Dee and Gypsy lived, is the third largest city in Missouri. It’s known for cashew chicken, Askinosie chocolate, and being a good place to raise a family. As someone who spent most of their formative years there, the biggest questions I’ve had recently are uncomfortable and personal: did we as a town, as a culpable collective, in some way enjoy being fooled by Dee Dee and Gypsy? Are we in some ways responsible for this tragedy? How Did Springfield let this family down, and how do we keep it from happening again?

In small towns more than anywhere, as Greene County Sheriff Jim Arnott told reporters at a news conference on Dee Dee’s murder, “things are not always as they appear.” Gypsy and Dee Dee lived in a quiet part of town up North, by the zoo. The scenic North side of Springfield, where I went to high school, forged me, but there are hidden pockets of poverty and neglect. As any teenager will tell you, it is a notoriously good place to get into trouble. The meth epidemic started in Springfield; there’s a strain named after our area code, 417.

But Springfield is also the type of place where nothing is more than a 15 minute drive away and community support is a given. People work hard and freely help their neighbors. My own family has benefited from this generosity countless times, whether being lent a generator during a bad ice storm or being given money for Thanksgiving dinner one year when we were struggling to afford groceries.

But it takes a village to raise a child, and that village’s arms don’t always extend everywhere. As Mommy Dead and Dearest director Erin Lee Carter told New York Magazine, “Those are people that should have seen. When we talk about cracks in the system, it’s everybody. Everybody is complicit in this.”

“No one asked for any more documentation. No one raised an eyebrow,” a neighbor Amy Pinegar told a Buzzfeed reporter. “Were they behind closed doors laughing at us” — she paused for a second — “suckers?”

I oscillate between anger at and sadness for Gypsy. She was clearly in so much pain, physically and emotionally, for so long. And I want to believe her —  I want to take on Erin Lee Car’s heavy optimism, to state unequivocally that Gypsy shouldn’t be in jail for plotting her mother’s murder. But I can’t. I just can’t. I cannot take the words of someone who admits in the film, without a hint of remorse, to keeping her attorneys in the dark about details of the case, completely seriously. I cannot look into the eyes of my fellow earnest Springfieldians, so clearly taking this personally, and believe that not one of them were trustworthy enough for her to come clean to, to have made one small gesture towards getting out of her wheelchair. And I occasionally have glimmers of sympathy for Dee Dee, who despite everything still didn’t deserve to be murdered in cold blood.

Though questions will always remain and details will continue emerge during the trial of Gypsy’s partner in crime later this year, the biggest question I have concerns Gypsy’s life moving forward. By the time she’s eligible for parole, Gypsy will be in her early thirties. In just the short time she’s been a ward of the state, she’s shown remarkable improvement. I have to believe that another decade of this care will make all the difference in her life. Springfield failed her once, and now Missouri has a chance to save her. Will we?

Laura E. Adkins, originally from Springfield Missouri, is an editor at the Forward. 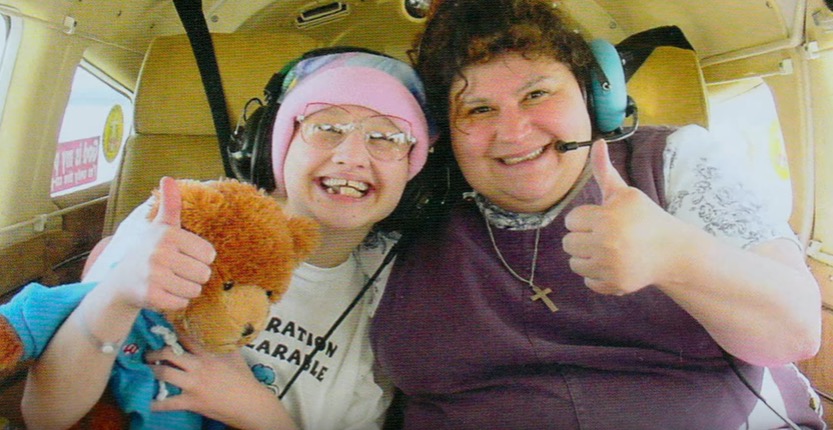