The year was 2011 and current Challenge rookie CM Punk was the reigning WWE world heavyweight champ. Okay, I don’t know if he was actually the champion at the time but Wikipedia said he was the champ in 2011 so he was either about to be the champ or he already was. CM Punk was in Costa Rica at the pool with some of the WWE Divas. Shawne Merriman was most definitely on the Buffalo Bills in 2011. Shawne Merriman was also somehow in Costa Rica with CM Punk and the Divas and came across them at the pool. According to the Twitter beef that followed, Shawne Merriman tried to make a move on one or some or all of the Divas and CM Punk called him out for them not being interested, making reference to that time the Bills choked in the Super Bowl four years in a row in the 1990s. To be fair, it’s really hard to make it to any Super Bowl and making four in a row means you’re a really, really good team plus without Buffalo not winning those Super Bowls, we’d never have the line from Buffalo ’66 about spanning time so it all evens out.  After CM Punk mentioned the Bills choking, Shawne Merriman made fun of a thong CM Punk was allegedly wearing. The back and forth between the two continued for years with CM commenting on Bills games and Shawne Merriman going in when Punk joined UFC. And now they’re both on a Challenge.

Part of the reason that reality TV continues to be a force in these times of excellent scripted television is that the storylines never stop. With Twitter and Insta and all of social media, plot lines are ever-evolving even when the cameras aren’t rolling. You can take a random poolside Costa Rican Twitter beef and use it as a plotline seven years later. And shout out to The Miz for trailblazing his way from Challenge champion to WWE champion, clearly paving the way for CM Punk to do the reverse, going from WWE champ to Challenge competitor. Shawne and CM decided to squash their feud early in this week’s episode but it was still a perfect backstory to make their eventual head-to-head in the elimination have one extra layer of interest.

But without Shawne Merriman to beef with, who will CM Punk drop pipebombs of truth on? There has to be somebody, right? CM Punk and Johnny Bananas get into a yelling match after the competition this week because of course they do. Look, I’m not going to go all “wrestling is life now” on you. But I’ll say this: you’re dealing with two of the savviest people in their respective businesses. Johnny considers himself to be producing from in front of the camera when he’s doing a Challenge. And CM Punk built his career to a very successful height by blurring the line between what is real and unplanned and what is predetermined and staged in the world of sports entertainment, which I’d argue the Challenge fits snugly into. So whether this was “a real argument” or they genuinely don’t like each other, they both know that it’s good for them and great for the show to have this rivalry. It’s also very fun to see Johnny’s sarcasm go up against CM’s earnestness. “You failed in the UFC” and “I was either going to succeed or fail gloriously” is the perfect exchange between these two. I’m also a big fan of CM calling Johnny “a fan” and Johnny pointing out that if doing Challenges are so low, then look where CM Punk ended up. It’s kind of hard to call someone out for their career being a joke when you’re now co-workers.

This episode was so great start-to-finish that I think it’s an instant classic. There’s a flag football game where they split up teams. CT assumes he’s going to be picked first, and Kam and Shawne as captains make sure he ends up going last. I was like “hahahaha, really funny joke, now seriously take CT first.” Darrell ended up first pick, and then Darrell ended up being Shawne’s pick for a coach in the elimination. And then Darrell ended up Johnny’s pick for coach as well. So everyone wants to be with Darrell, which makes perfect sense. But guess what, I really like watching the Champs and Pros compete with each other and I like watching them hanging out with each other. Last episode they went bowling together and it was fun. Like hanging out with all my friends. This week, the football game was even better. Even when Lolo Jones decided to play it like she was Bradley Cooper in Wedding Crashers. She threw a body  block and then was like “crab cakes and football, that’s what Maryland does!” I like watching them all hang out in this loft, which I still have no idea if they’re all living there or just come to once a day to play foosball and eat buffet-style and watch CT react to Camila and Ashley not be able to say “ingenuity.”

But the best part of this episode was the other long-running feud of the show. Johnny vs. Wes. The Champs beat the Pros in rolling around on the ground like human hot dogs through an obstacle course of ketchup, mustard, and relish. Kam and Shawne looked like those footlong hot dogs you get at a Queens street fair that you eat half of and then throw away to get a churro. Jordan was safe as team captain. And for the Pros, CM Punk automatically was going into elimination as losing captain. Victor Cruz came into the loft (while everyone was eating and playing foosball and maybe or maybe not living there?) and threw a surprise vote on everyone. The Champs—they’re always ready for something like this. But the Pros, they’re not about this life yet. Part of the fun is watching the Pros react to the nuances of this game—like how they felt about rolling around wrapped in cellophane or Kam’s face when Cara Maria mentioned they’ll probably have to eat some gross horse testicles at some point. The Pros asked CM who he wanted to face but he wisely deflected. Shawne volunteered because he did the worst in the rolling. All of this is important because next up the Champs had to pick their two to go in—because it’s automatic eliminations every week.

As winning captain, Jordan picked Wes. And this is very important and a big reason why Wes should be on every Challenge. Wes and Johnny hate each other. Also, Wes loves to throw the house into chaos. He also loves to make huge moves, which in fairness usually blow up in his face. But an important thing is at play here. This is for charity and while I believe Wes wants to win money for his charity, there’s not actual money at stake for him. He can make a huge move and it’s all upside. If it backfires, it’s not money out of Wes “I Have 40 Businesses” Bergmann’s pocket. So with the biggest smile on his face, Wes says “aren’t you going to ask me who I want?” And everyone says “fine.” And he smiles even bigger and points “Johnny.” And the votes go that way because how can you not set up a Wes vs. Johnny elimination. They’ve been rivals for years and have never faced each other in an elimination. It’s perfect. Because they’re going to be blindfolded and trying to break sticks over each other, Johnny picks Darrell as coach and Wes picks his ex-rival (and Rivals II co-winner), CT. I love this elimination because swinging a stick blindfolded is already the most fun and it’s even better when you’re going after a human piñata. In a glorious moment of victory, Wes beats Johnny, which is twice as bad as losing to anyone else for Johnny. And in an even bigger upset, Johnny is speechless for maybe the first time in his life. Oh, and CM Punk does a blindfolded barrel-roll for some reason and managed to beat Shawne in spite of it.

I’ve said it before but here it is again. As fun as it is to watch Johnny win, it’s equally fun to watch him lose. In an episode full of old and new beefs, Wes manages to come out ahead and make it known that he is now gunning for Jordan for throwing him in. A new rivalry! See, it never stops. There’s always something new happening, pushing it all forward. It will never stop so just embrace it. 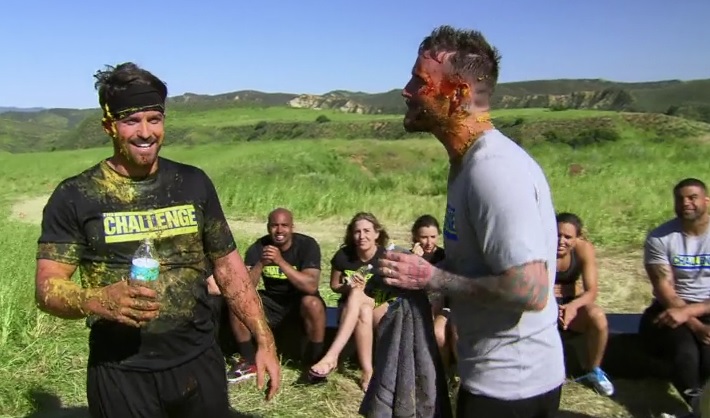