Champs vs. Pros is an amazing concept. You’ve got your professional athletes on one side. Those are the “pros.” And then way, way, way, all the way on the other side you’ve got the champions. They’ve won a Challenge before, which is why they are the “champs.” In the middle, you have a “vs.” which means one of those sides is up against the other. Except that in Champs vs. Pros so far, the teams have faced off in indirect or pseudo-indirect competitions. The first week involved separately played events with the best time winning. Last week, well last week they were cellophaned into human-sausages like a Seth Rogan anime. And yeah they could roll over each other and stuff but it was more of a free-for-all. The Champs face off in the elimination against their own team, as do the Pros. And its not like I have this need to see Kamerion Wimbley crush Wes into a fine pasty paste in an elimination—I don’t want Wes to die, I think he needs to be on every season forever. But, I do want to see the Champs face off in direct physical combat with the Pros. Hello, beautiful.

This week, one player from each team would square off on a moat-surrounded rectangle of dirt with a large pole between them and the first one to get thrown into the like Robin Hood Men in Tights did to Little John when Dave Chappelle was like “I’m on the one side, I’m on the other side, I’m on the east bank, I’m on the west bank” loses. It was a women’s elimination week and Ashley M volunteered again for the Champs captain. Lindsey Jacobellis with the finest hair of Mr. Perfect stepped up fro the Pros. The Champs thought they had the advantage because of their superior strategy which started off with Wes calling out Kam as if Kam wasn’t simultaneously on the brute squad and also the entire brute squad. Wes is like a con man who has 100% pure belief in his capers but they still go wrong like 50% of the time but 100% of that time he wanted you to believe he actually planned it to go that way like yes I meant to get caught stealing that painting because I needed to be in prison for the long game of something else you don’t even know about. Kam did to Wes what the parade stampede at the end of Animal House did to Kevin Bacon.For the most part, that’s actually what the Pros did to the Champs. With the exception of CT, who tossed CM Punk into the like a penny into a fountain. Louise described CT as being “Picasso-like” in his general appearance but when he competes, you can see the beauty there which is the most poetic definition for CT bashing someone apart. Even Tia Blanco, who everyone assumed was the underdog put Camila face first into the .

Back at the loft, in between the opening of the buffet and many games of foosball, the rift between Lolo Jones and the world continues to widen. Lolo asked for a pass from elimination since she feels like she’s been doing extra work every week. She also feels like she’s being ganged up by the other Pros, mostly because she’s rubbed them all the wrong way at one point or another. While they continued to debate, the Champs got to do their vote. Ashely M was automatically in because her team lost. The votes started up with CT throwing in Ashley K because you never ever say CT’s name and last week she did that. It was split between Cara and Ashley K. Wes convinced Camila to vote for herself so that she wouldn’t have to make a choice. This also allowed Wes to cast the tying vote for Cara. Again, Wes did it with a big smile on his face because he knew he got to create some drama that had not previous been there. He’s like Oberon King of the Challenge prancing around and making things complicated for the fun of it. The tie meant that Ashley M got to choose who went against her so she picked Ashley K.

When the Pros were ready to make a choice, Lindsey said Lolo’s name. The Pros, finally comprehending some of the strategy here forced a tie so Lolo could pick her poison. CT was like “you gonna cut the head off that snake?” while Lolo conferred with them about whether to go with an easier win (Tia) or one of the stronger players after her (Louise). Lolo literally said “Wes is the smartest” which would’ve made Bananas’s head explode. But also, these Champs have Lolo convinced they’re looking out for her, which is the legacy of Johnny’s hard work and Wes’s conniving. Lolo picks Tia.

In the elimination, Ashley M hears Jordan and the rest of the team saying that she is the weakest player which is a bad idea, don’t you know Ashley M believes in The Secret and all she has to do is picture something and put it out into the world and it will come true, she’s like Ray in Ghostbusters thinking about marshmallows. The elimination is the game where you have to score a ball into a container in the middle of the circle and your opponent is trying to knock the ball out. After Ashley K gets confused and scores for Ashley M, Ashley M shuts her down and then shoots a fadeaway jump shot like Robert Horry that somehow goes in for the win. Then she calls out her team for saying she was going to lose. And Jordan is like “it’s because Ashley K scored one for you” but I disagree, being good at this is about capitalizing on whatever you can and Ashley M really did shut Ashley K down on her defense rounds.

With time running out, Lolo and Tia were suiting up when Lindsey gets all gakked up and decides that she wants to see if she can go in and take Tia’s place. Incredible move. Great TV. Although, I am torn on this. Because you definitely shouldn’t be able to choose to go into the elimination once you see what it is. I’m not saying that’s what happened here. This was some extreme rivalry playing out. But in theory, if there was an elimination you knew you could win at once you saw it, you could volunteer to go in place of someone who didn’t have as good of a chance. Still, great move. Loved it. Victor Cruz left it up to Lolo, since it’s her game on the line. We’ll see next week if Lolo lets it happen. 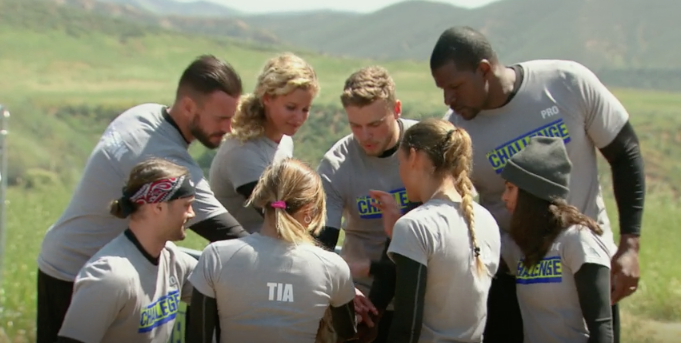