I have never seen the hidden picture in a Magic Eye in my entire life. Not even once. Not for a second. I’ve squinted, I’ve looked past the picture. One time I even lied and said I saw Fantasia Mickey with the dancing brooms spilling their buckets in a Disney Magic Eye. This lead me to believe in the possibility that Magic Eye was one big conspiracy against me. Those books sold millions of copies. They had posters in malls. Kevin Smith used it as a joke in Mallrats. Seemed like an awfully elaborate scenario just to try and gaslight me into believing everybody was seeing this thing that was clearly not there. But then I thought, what if it’s some kind of Inception-like dream state where all of this reality is a figment of my imagination and the only way I can tell that this isn’t real is because I can’t see the Magic Eye picture like that time in Batman: The Animated Series when Bruce Wayne realized he was stuck in a dream because he couldn’t read, because in a dream your brain can’t recognize words. And then I realized what a waste it was that Christopher Nolan didn’t build a whole three-hour movie about the dream episode of the Batman cartoon. But what I really realized was that the way I have stared at Magic Eye—not knowing if it’s a universal conspiracy against me or if all that I recognize as my reality is a Batmanian dream state—that same way I look at Magic Eye is how Cory stares at triangles.

The first part of the final kicked off last night and yes, there were puzzles. And one of these puzzles was a big triangle with a lot of little triangles in it. There was a pretty simple math equation that you had to do once you counted all the triangles and that answer gave you the combination to a lock. The reason I know it was a pretty easy math equation is that the final answer was 108, which is still within the first 110 numbers. It’s not like they were dealing with any integers that would necessitate math commas. Cory and Nicole were teamed up in this first portion which would be like if Good Will Hunting was about Morgan working as a janitor at Harvard and one night a professor leaves an equation on the board and the next day someone answered it with “80085” if you hold the calculator upside. Cory and Nicole were so baffled by the triangle puzzle that they started to read the sign and count the letter “As” because they sort of look like triangles. Cory and Nicole took so long and still couldn’t get the answer that they hit the time limit. The producer gave them the answer and Cory wanted to stay so she could explain it to him and she was like “seriously just go.”

Camila, who somehow keeps getting saddled with partners at their worst, put on the most impressive display of the episode even though by the end of it, she was nowhere near being at the front of the pack with her time. First, she solved the triangle puzzle and the second THE CHALLENGE logo puzzle when she was paired with CT. In the second portion, she was teamed with Cory. At one point they had to eat a bunch of food. Cory, who is the King of the Good Projectile Vomit was choking down these grasshoppers and such while Camila made quick work of the spread like she was at the good buffet and they brought out a new batch of crab legs. And then finally, they had to drag a cart with puzzle pieces along a trail. About halfway Cory got winded and so Camila picked up this cart and dragged it herself like she was inside Oregon Trail and her ox drowned and she was like someone has to ford this river, I’ll handle it. Of course, in the most Cory and Camila way to blow a challenge, they realize they didn’t read the instructions on the sign properly and completed the puzzle on the wrong pole which is hilarious because in the previous challenge, Cory was reading the signs counting A-triangles and now out of two possible poles, they did it the wrong way. There was literally a 50-50 chance of getting this right if they didn’t read the instructions at all.

Another surprisingly good performance from Ashley, who seems to be genuinely good at puzzles. And another surprisingly watchable performance from Nelson, who is one of the most entertaining people I’ve ever seen on television. First, he got caught in the current on the swim portion at the end of last week’s show. If I never saw another Challenge episode after that, I’d believe he was stuck there forever in some kind of ancient trap Poseidon set for the Argonauts that Nelson managed to Pure Luck his way into finding several centuries later. The way Nelson talks about other people talking about him is absolutely mind-boggling. It’s like “all those people who said you’re the worst piece of garbage that can’t even be recycled so they burn it but the fumes are illegal so you’re the reason there’s no ozone layer.” He makes it seem like many, many, many people have doubted him forever. And he’s so earnest about it all. Like I very much believe he believes everything he says. Even when he’s like “this puzzle piece was 200 lbs” but he’s holding it out in front of him and carrying it with ease, I really do believe that he believes that he’s holding 200 pounds solo.

The final is three days long and they make everyone sleep in the shelter in between competitions. CT is there in all of his dad-CT glory, splitting coconuts and being supportive to his partners. He’s calmer, he’s easier to work with. It’s impossible not to root for him to take it all. We’re one episode away from a possible CT championship, which is the most beautiful thing possible on this shows. But if he doesn’t take the win, everyone else has been just as entertaining to deserve it. Whichever two are the champs at the end of this, I salute you both. 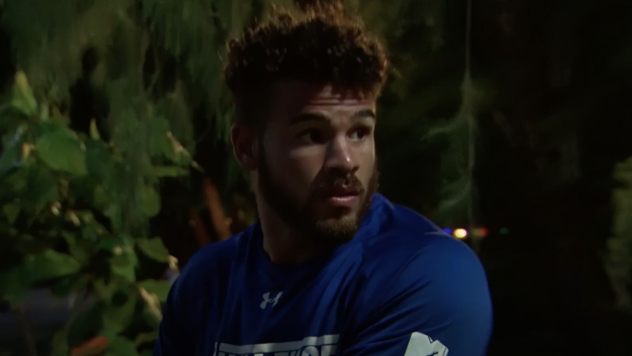