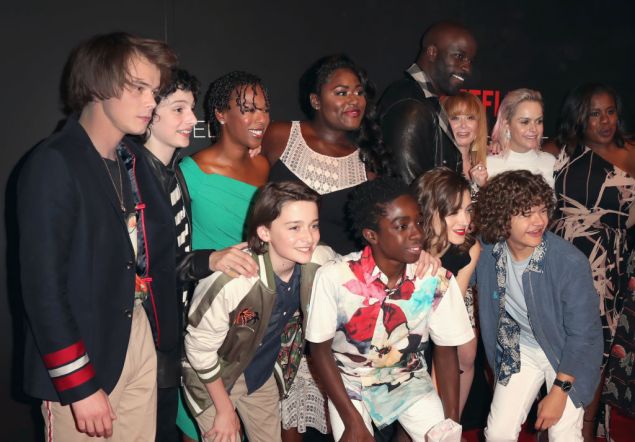 There are now so many original shows on Netflix, it’s easier to stretch out watching an entire season of a series instead of binge watching it all in one weekend. I’ll catch some Dear White People in between episodes of Black Mirror, and then maybe throw in an episode of Narcos. Sometimes, I have dreams in which the shows mesh together. There’s Marque Richardson as Reggie hanging out in the living room with Katherine Langford as Hannah from 13 Reason Why. She says, “This is your tape,” while the kids from Stranger Things ask me if I have syrup for the Eggos.

Why am I even telling you this? Because on Sunday (May 7), during Netflix’s FYSee kick-off party, these TV series crossover dreams became a reality. But instead of hanging out with these fictional characters during my REM cycle, they were all standing before me, kickin’ it on the dance floor while DJ Grandmaster Flash played everything from Michael Jackson to The Pretenders to Selena Gomez. I needed someone to pinch me.

So, just how did this magical moment come about? It happened because Netflix is taking their awards campaign to an unprecedented next level. It’s almost as if Netflix saw the way Amazon grabbed TV Academy voters’ attention back in April and said, “I see your bid, and I’ll raise you.” Amazon transformed the Hollywood Athletic Club into eight immersive show-themed experiences, and for a whole week, this FYC setup hosted live performances and panel discussions.

The Netflix FYSee house in Beverly Hills was constructed from scratch in an unused building in Beverly Hills, and entering inside was like walking into real life video game. There were rooms upon rooms set up with huge installations on display for which will hold court to present panels and screenings for an entire month.

With multiple bars set up, snack stations positioned around every corner offering all types of candy, chips, and popcorn, guests pointed to their favorite outfits inside the rotating closet from Unbreakable Kimmy Schmidt checked out the actual crown from The Crown, and admired a larger than life House of Cards construction that glowed in the dark.

Each themed display also had a staff member standing by to take pictures of guests with the interactive displays. The Luke Cage installment had a prop fridge for people to pick up as if he or she were a superhero, and the Narcos area featured a large wall absolutely covered from top to bottom with stacks of cash. With a glass of white wine in her hand, even Dear White People star Logan Browning stopped to take a photo by this rich display.

The Stranger Things room was by far the biggest attraction, featuring a Hawkins van that appeared as if it were about to crash head on towards a cluster of kids’ bikes. Actor Paul Scheer hopped on one with his wife, Grace and Frankie star June Diane Raphael, to take a picture, as did 13 Reasons Why stars Katherine Langford, Dylan Minnette, Justin Prentice and Devin Druid.

Now, even if Netflix doesn’t sweep during awards season, there’s a lot for them to celebrate. One look around the room, and the network’s commitment to continuously featuring diverse casts is immediately apparent. No matter what a viewer’s age, race or sexual orientation, there’s a series on Netflix to which he or she can relate. On the red carpet, I heard a reporter ask Alan Yang if he could tape a quick shout to a friend who’s big fan of Masters of None, the Emmy Award-winning writer, graciously game. Soon after, the reporter’s friend responded with a video message of her own. This young Asian girl could barely speak because she was happy crying so hard. It’s moments like this that reinforce just how positively influential TV can be when it’s done right.

Even though many of the Netflix stars were at the MTV Movie Awards earlier in the evening, I was surprised to see that afterward, they all beelined over to the FYSee kick-off party. Stranger Things it-girl Millie Bobby Brown, adorable in a white dress and matching white cowboy boots, headed straight to the dance floor, causing a ring of spectators to form around her. Co-stars Noah Schnapp and Caleb McLaughlin cheered her on, as did One Day at Time’s Marcel Ruiz and Isabella Gomez. Even Danielle Brooks from Orange is the New Black jumped in their circle.

Because it was a Sunday night, I had expected this party to be quite tame. But the DJ made it impossible to leave the dance floor. Grandmaster Flash didn’t play one bad song during his entire set, and soon everybody was drenched in sweat from rocking out. No one left until the main lights finally came on. Pshhh. Sunday, Shmunday, amiright?

David Foster and his latest album

If you’ve never heard of the Mormon Tabernacle Choir, you are not alone. And if you only know David Foster’s name because he’s father or step-dad to an entire slew of famous kids, I can guarantee that you’ve at least heard a few his songs. Ever belted Whitney Houston’s “I Will Always Love you” at the top of your lungs? Celine Dion’s “Because You Loved Me”? Or my personal favorite, Michael Jackson’s “Earth Song”? These are all hits created by the 16-time Grammy Award winner.

Sitting down with the legendary music producer at the London Hotel in West Hollywood, “You need a flowchart to follow me,” Foster joked. “I posted a picture on Instagram because I was at the airport and I opened up a magazine, and there were a couple of my kids. Sarah and Erin [Foster] are on VH1’s ‘Barely Famous.’ Gigi is undisputedly the world’s number one supermodel. Yolanda [Hadid] has her show. My daughter Amy [Foster] writes all of Michael Buble’s hit songs. Bella’s comin’ up. It’s quite a ride. And oh, Brandon and Brody Jenner are my stepsons. Great boys.”

Wearing a royal blue suit with matching gold-rimmed aviator sunglasses, Foster has that George Clooney silver fox vibe. Handsome, and being one of the most successful songwriters of all time, I expected him to have an oversized ego. And while there’s no lack of confidence in Foster’s demeanor, he’s down to Earth, attentive, not once pulling out his cell phone to do the “I’m just so busy. Can we try to wrap this up quickly?” routine.

Even though the 67-year-old said without hesitation that he’s done appearing on reality TV, the hitmaker still likes to perform. On the Mormon Tabernacle Choir & Friends album, officially out on Tuesday, May 12, Foster is featured playing the piano on “The Prayer,” just one of the star-studded tracks on the compilation CD of live performances from the 20,000 seat Temple Square in Salt Lake City, Utah.

Foster and Choir composer and director, Mack Wilberg, have been collaborating since 2007, and this album features the likes of Santino Fontana, for which Wilberg claims “is so consistent, that he’s never had a bad performance,” along with Angela Lansbury, Sting, Yo-Yo Ma, Amy Grant, James Taylor and more.

“I’m Mormon Tabernacle lifer,” Foster says. “My father and I used to listen to them on the radio. And it’s been a goal of mine to work with a choir. The church, it doesn’t matter if you’re an atheist, or whatever you are, when you walk in that church, something comes over you. Couple that with an orchestra, and a 360 piece choir playing a song, it’s magic.”

Foster then asked, “Did Mack mention how Sting was so moved while performing at [Temple Square] that he was brought to tears? I took Steve Wonder there a few years ago and I tried to tell him, but it’s overwhelming. So hardcore. I’ve done a lot of shit in my life, and [being there] is just incredible. It will bring you to your knees.”

I asked David which artists he would love to see collaborate with the Choir in the future, and he said it would be incredible to do a piano ballad with Rihanna, of whom he’s a huge fan, and that Robert Plant of Led Zeppelin would be amazing.

It was almost as if I could hear the music genius’ brain start to click.

“Could you imagine him singing ‘Stairway to Heaven’?” Foster continued. “All seven minutes. We really need to make this happen. I’m not kidding.”

I hope he’s not. Because a lot of people, myself included, would start planning their first trip to the infamous Temple Square to see that performance live.

During the reception after a screening, a young starlet wanted to take a photo with two of her friends. She asked the first waiter who happened to walk by to take the shot, and as he focused the camera she asked, “Is the flash on? Are you sure? Okay.”

It was a very “Celebrities are just like us!” type of moment. The girls moved around to change up their poses, something for which the waiter mistook as a sign that his job as photographer was over, and after closely inspecting the photos she said, “Ugh. None of these work.”

The three girls took pause. It appeared that each of them were debating over whether they should ask someone else to take more pictures, or if the moment was over.

“Whatever,” she says. “The lighting here is terrible. It will never turn out. Let’s just forget it.”

Aside from it being awesome to know that even the most beautiful actresses sometimes struggle to snap what always appears to be an amazingly gorgeous, candid picture, what was most interesting, the reason I’m even mentioning this story, is that after she deemed the photo not to her liking, she put her phone away, and didn’t pull it out once during the rest of the evening. See, world? Not all millennials are obsessed with their phones and social media. There is hope for humanity, after all. 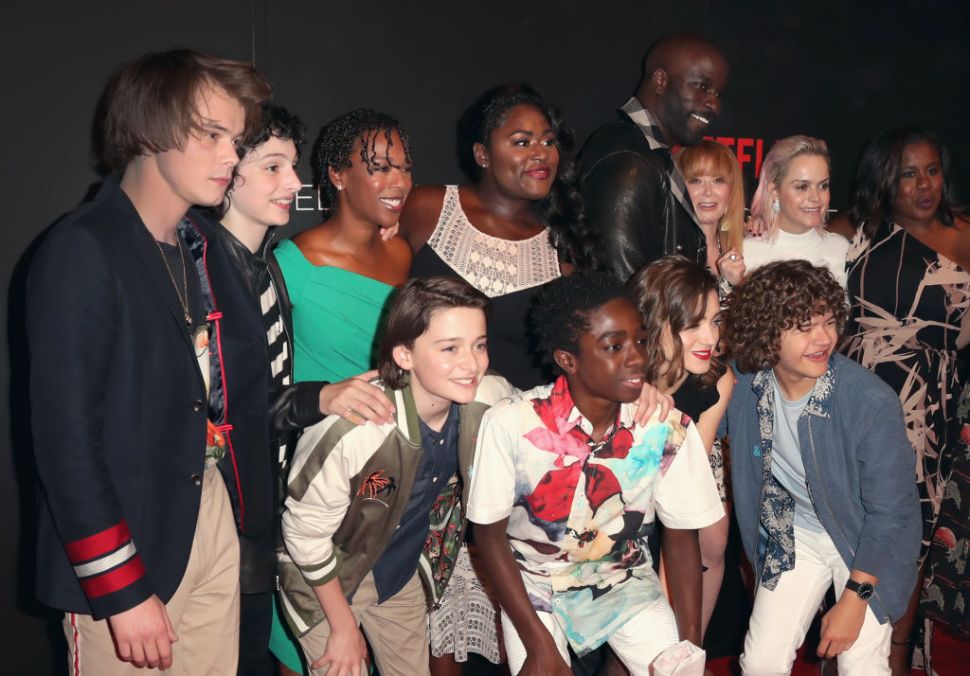