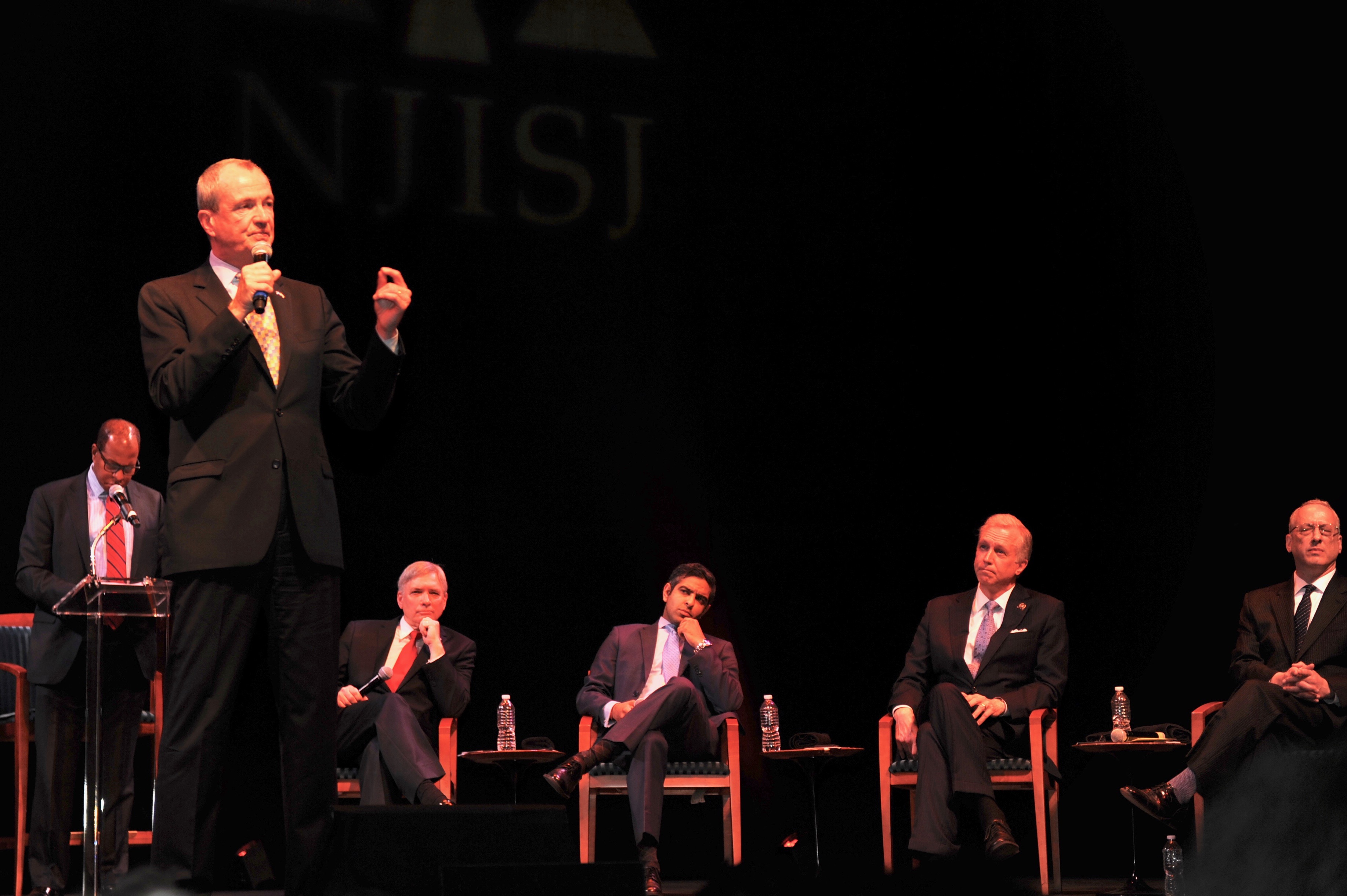 Murphy, Rogers, Hirsh Singh, John Wisniewski and Mark Zinna at NJPAC on May 1, 2017. Kevin B. Sanders for Observer

What about the other 15 candidates?

Five Republicans and six Democrats qualified for the primaries on June 6, and another eight candidates are running as independents, hoping to get a foothold in the race.

And the field could still grow. Independent candidates have until June 6 to file 800 petition signatures to make it onto the November ballot.

Here’s a rundown of the Democrats, Republicans and independents who want to replace Gov. Chris Christie after his term expires in January 2018:

BILL BRENNAN
Brennan is a retired firefighter and activist most known for filing a citizen’s complaint last year against Christie over the 2013 lane closures on the George Washington Bridge, and also a request for a special prosecutor to investigate Christie over the Bridgegate episode. (Federal and state prosecutors declined to pursue charges against the governor.) Brennan will be on the ballot in the June 6 primary but did not raise enough funds to qualify for the primary debates. He has not filed any records of fundraising with the state Election Law Enforcement Commission.

JIM JOHNSON
Johnson is a former undersecretary of enforcement at the U.S. Treasury who once ran the Secret Service, U.S. Customs and the Bureau of Alcohol, Tobacco and Firearms. The former partner at the New York law firm Debevoise and Plimpton has never held elected office, but he packs a punch in the fundraising department, and his resume is packed with prestigious credentials and assignments. To date, Johnson has received $1.28 million in public matching funds for his campaign, enough to buy him some TV ads.

RAY LESNIAK
The former New Jersey Democratic Party chairman and liberal stalwart is retiring from the state Senate and going all in with his gubernatorial bid. But he has not filed fundraising reports with ELEC and did not qualify for state matching funds. He has committed to spend at least $430,000 on the primary and intends to participate in the two Democratic primary debates.

PHIL MURPHY
With the support of every Democratic county party, Murphy is the front-runner in the packed field of Democrats. The former Goldman Sachs executive and U.S. ambassador to Germany loaned his campaign $10 million to get off the ground, a number that dwarfs the amount challengers on either side of the aisle have been able to muster through fundraising and public financing. He has a left-wing platform that includes full funding for schools, a possible tax on millionaires, and a public bank. Murphy has never held elected office, but he has been a top fundraiser for national Democrats.

JOHN WISNIEWSKI
The inquisitor who uncovered the link between Bridgegate and Christie’s office has been running on a liberal platform that echoes Bernie Sanders, calling for single-payer health care and full funding of schools and pensions. Wisniewski was the New Jersey point man for the Sanders presidential campaign last year, and is a former state party chairman with a deep knowledge of transportation issues. Sanders has said that Wisniewski would make a “great governor” but has declined to make an endorsement. Wisniewski’s campaign has received about $751,000 in state matching funds. He will participate in both Democratic debates.

MARK ZINNA
The Tenafly councilman entered the race for governor in February. According to his website, Zinna is pushing Medicaid for all, renewable energy, and dismantling the Port Authority. He has not reported any fundraising with ELEC and did not qualify for the Democratic primary debates.

JACK CIATTARELLI
The assemblyman from Somerset County has secured the support of a few county party organizations, which will give him a boost in the June primaries, although his rival, Lt. Gov. Kim Guadagno, has locked down the support of the party committees in the biggest GOP counties. He is also one of the only candidates to qualify for the state’s matching funds program. So far, about $693,000 has been disbursed to his campaign. He and Guadagno are the only two Republicans to qualify for primary debates.

KIM GUADAGNO
New Jersey’s lieutenant governor and secretary of state has secured the majority of Republican county committee endorsements, something that will give her favorable ballot positioning in vote-rich counties for the June 6 primary. Guadagno has received about $1.23 million in matching funds. Ciattarelli’s camp says she is too closely associated with her unpopular boss, Christie, to be an effective standard-bearer for the party and for the down-ballot candidates in legislative races.

STEVE ROGERS
The Nutley commissioner has reported $3,720 in fundraising to ELEC. That puts him out of contention for the upcoming debates. Rogers was an adviser to President Trump’s 2016 campaign. At a forum Monday night, he vowed to visit every single house of worship in the state if he were elected. He opposed Christie’s plan last year to boost salaries for state government officials and allow the governor to cash in on a book deal, saying “these types of deals underscore the problems establishment politicians give to us from Trenton.”

JOSEPH “RUDY” RULLO
The Ocean County businessman is running on a platform to “drain the swamp in Trenton.” An ardent Trump supporter, Rullo shares the president’s worldview. He has not reported any fundraising to ELEC and did not qualify for the debates.

HIRSH SINGH
The engineer and political newcomer claims to have raised more than $900,000 for his gubernatorial bid, a number that would qualify him for the Republican primary debates. However, Singh failed to file his application with ELEC by the April 3 deadline, a mistake he attributes to his first-time candidacy. Singh is suing ELEC in an attempt to get on the debate stage. ELEC has posted no records showing that Singh has raised funds.

PAUL BINETTI
Binetti is a 39-year-old insurance agency owner from Secaucus, according to his website. He has yet to file and fundraising reports.

GINA GENOVESE
The candidate loaned her campaign $10,376 and has gotten a $1 contribution, according to an April 17 ELEC filing. Genovese is a former professional tennis player who was elected as the first openly gay mayor of Long Hill township in Morris County in 2006. She is the founder Courage to Connect NJ, a nonprofit focused on consolidating government resources to lower costs. While she was elected in Long Hill as a Democrat, Genovese is running as an independent in the New Jersey governor’s race.

SETH KAPER-DALE
Kaper-Dale  is the Green Party candidate for governor. His website notes that he is a reformed church pastor from Highland Park whose affiliation to the Green Party stems from his belief that “the party’s focus on social justice is so principled.”

JON LANCELOT
According to Lancelot’s website, this candidate is not from Camelot. He is a computer technician who has “been involved in political activism since 2004.” Lancelot has yet to report any fundraising with ELEC.

MIKE PRICE
The Atlantic County businessman announced he would be running as an independent gubernatorial candidate in February 2015. To date, Price has not reported any fundraising. Price’s Facebook page says his campaign is focused on revitalizing Main Street. He has never held elected office.

MATTHEW RICCARDI
A U.S. Marine, Union City native, philanthropist and legal services manager, according to his Facebook page. He has yet to file any fundraising reports. His campaign slogan is “Put NJ 1st 4 Once!”

PETER ROHRMAN
The Libertarian candidate is a veteran of the U.S. Marine Corps who, in 2015 and 2016, ran unsuccessful campaigns for Bergen County freeholder. He will be running as an independent and has enlisted a running mate, Karese LaGuerra.

VINCENT ROSS
Other than declaring his candidacy, Ross has filed no forms with ELEC. 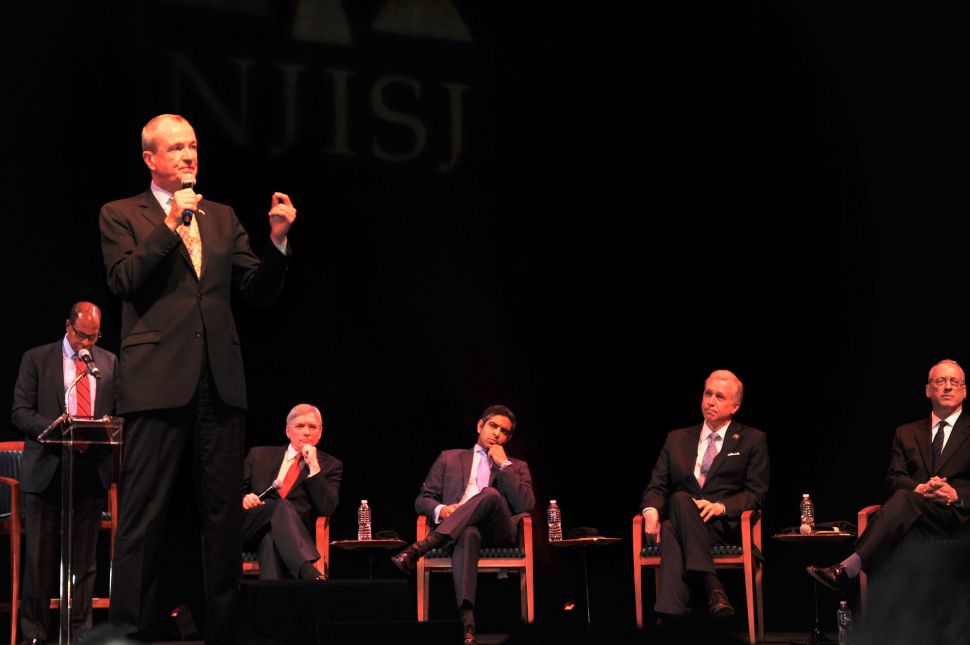