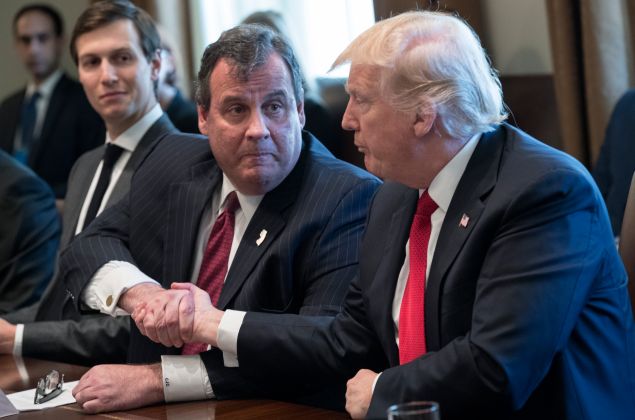 Gov. Chris Christie, a former federal prosecutor who gave a strident speech at the Republican National Convention attacking Hillary Clinton for keeping a private email server while she was secretary of state, is refusing to engage with questions about President Trump and this week’s revelations about Russia and former FBI Director James Comey.

Meanwhile, attorneys for the Christie administration were in court on Wednesday, arguing that legal challenges to the governor’s plan to finance state house repairs were too slow to file their lawsuits and had no case.

And with primary season in full swing, it seems Democrats campaigning for seats in the Legislature have a big financial advantage over their GOP rivals, according to a new report.

Quote of the Day: “If there are any other non-Trump questions, I am happy to take them.” – Gov. Chris Christie.

After slamming Clinton over classified slip-ups, Christie gives Trump a pass
The mood of the crowd inside the Republican National Convention arena in Cleveland rose to near lynch-mob frenzy last July 19 as Gov. Chris Christie, the prime-time speaker, carried out a partisan prosecution of Hillary Clinton, the Democratic nominee.
Charles Stile, The Record Read more

Ethics experts call Frelinghuysen’s action ‘an awful thing to do’
Even if Rep. Rodney Frelinghuysen’s decision to identify a member of an opposition group to her employer doesn’t run afoul of any laws nor congressional ethics rules, experts questioned his actions.
Jonathan D. Salant, NJ.com Read more

Democrats far outpace Republicans in scrap for N.J. Legislature campaign cash
Democratic candidates have outraised and outspent their Republican rivals about 2 to 1 so far in this year’s races for all 120 seats in the New Jersey Legislature, according to a report from the state’s election watchdog agency.
Brent Johnson, NJ.com Read more

NAACP: Neptune HS needs ‘anti-bias’ education after racist photo
The Asbury Park-Neptune chapter of the NAACP is calling for a “thorough investigation” after an incident in Wall where two Neptune High School students allegedly took a photo showing them posing in front of swastikas and the n-word spray painted on a wall.
Austin Bogues, Asbury Park Press Read more

Barred from Paterson school board, now nominated for housing post
A church deacon who was barred from serving on the city’s school board last year because he was convicted of crimes in 1991 has been nominated for a position on the Paterson Housing Authority.
Joe Malinconico, Paterson Press Read more

EDITORIAL: School bus camera plan not about the children
New Jersey’s latest attempt to stick it to motorists under the guise of supposed safety is up for an Assembly committee vote Thursday, this time dressed up in “protecting our children” garb.
Asbury Park Press Read more