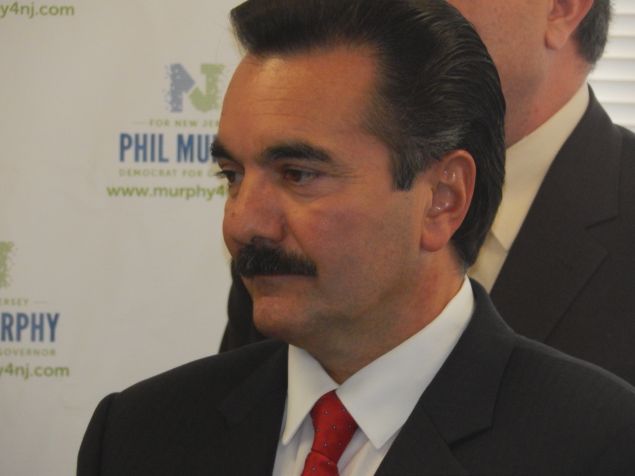 Assembly Speaker Vincent Prieto has his own, $125 million plan to revise funding for New Jersey’s schools, setting up what looks like yet another battle with Senate President Steve Sweeney, a fellow Democrat.

President Trump spent the weekend in the Garden State, drawing protesters to Bedminster. And a request by the state’s top judge for ICE to stop arresting immigrants in New Jersey’s courthouses is going unheeded.

Quote of the Day: “It’s not a question of whether we have pride that a president is in town. It’s just that there are a lot of dignitaries that live out here.” – Bedminster resident David Weiss on President Trump.

Why GOP health plan could be especially tough on N.J., Pa.
New Jersey and Pennsylvania could be among the biggest losers in the Affordable Care Act replacement plan that squeaked through the House on Thursday, policy experts said, and for reasons that have gotten little public attention.
Don Sapatkin, Inquirer Read more

The Trump Effect: What will the president mean for Bedminster real estate?
Residents of Bedminster are used to getting a blank look whenever they tell people the name of their hometown, followed by a quizzical, ‘Where?’
Kathleen O’Brien, NJ.com Read more

Anti-Trump protesters take to Bedminster, gear up for summer rallies
The resistance did not have breakfast on Saturday morning.
Nick Muscavage, Gannett Read more

Sleepy Bedminster settles into new role as Trump getaway
It was recycling day in this quiet corner of New Jersey horse country where the estates have names like “Tall Oaks” and “Stone Meadow” and some roads are paved with nothing more than gravel and dust.
Mike Kelly, The Record Read more

Latest Problem for New Jersey Transit: Collecting Fares
New Jersey Transit, one of the nation’s busiest commuter railroads, has been flogged by riders who have suffered through a brutal stretch of travel upheavals. The railroad’s safety record is under scrutiny after a fatal derailment last year.
Emma G. Fitzsimmons, New York Times Read more

Democrat Murphy doesn’t shy away from talk of tax hikes
As Phil Murphy, the ex-Goldman Sachs banker, continues to fill out his profile as a liberal candidate for governor, one thing has become clear: He’s not afraid of uttering the dreaded t-word.
Charles Stile, The Record Read more

Like Christie Whitman before him, Chris Christie’s sticking us the check
It’s nice to see that our governor has a healthy respect for tradition.
Unfortunately the tradition in question is running up a big tab just before leaving office.
Paul Mulshine, NJ.com Read more

Winners and Losers: Health Care Rewrite
In Washington, Republicans lawmakers in the House passed a sweeping rewrite of the nation’s health care laws after years of failed plans and votes that went nowhere. Now it’s up to the U.S. Senate to review the legislation and decide whether it lives or dies.
Observer Read more

Christie Concerned About Possible Rollback of Medicaid Under AHCA
A day after Republicans in the House of Representatives passed a major rewrite of the Affordable Care Act, Gov. Chris Christie said he has some concerns over the new bill’s deep cuts to Medicaid.
Alyana Alfaro, Observer Read more

Trump budget would effectively kill drug control office
President Donald Trump’s fiscal 2018 budget would cut about 95 percent of funding for the Office of National Drug Control Policy, effectively ending its mission as the lead agency in charge of combating the opioid crisis and other drug epidemics, according to an internal office email and two sources who spoke with POLITICO.
Dan Diamond, Politico Read more

Neptune school chief responds to racist photo
The Neptune Township School District sent a letter to parents, students and staff Thursday after an image circulated on social media purportedly showing two students, one with a can of spray paint in hand, standing in front of a wall in which a racial slur and anti-Semitic symbols are displayed in spray paint.
Austin Bogues, Asbury Park Press Read more

N.J. cardinal offers historic welcome to LGBT community
Talk about being in the right place at the right time.
Jersey Journal Read more

How Lakewood became a worldwide destination for Orthodox Jews
It is Friday in Lakewood.
A few thousand young men in black suits and wide-brimmed black hats are rushing toward Beth Medrash Govoha (BMG), the world’s largest yeshiva outside of Israel.
Mark Di Ionno, The Star-Ledger Read more

In Atlantic City, Discord Among Democrats Ahead of Mayoral Primary
The state takeover of Atlantic City’s finances is looming over this year’s mayoral race and has dominated the bitter primary battle between two hopefuls on the city council.
JT Aregood, Observer Read more

Editorial: Want a $750 million Statehouse makeover? Treat Yourself!
In the mood to run around all day in a Batman suit? Treat yourself. Eat sushi made from fish formerly owned by celebrities? Treat yourself.
Star-Ledger Read more

Editorial: As Christie flees, we’re left in budget crisis. Here’s how to fix it
By now, most people know New Jersey has the second lowest bond rating in the nation – aside from being wrongfully mocked as “the armpit of America,” it’s our least honorable distinction.
Star-Ledger Read more