Mayor Bill de Blasio told reporters today that he will sign an executive order later this week maintaining New York City’s commitment to the Paris climate change accord amid swirling reports that President Donald Trump will likely withdraw from the international agreement.

Axios reported this morning that Trump has decided to withdraw from the pact, which the United States signed on to under former President Barack Obama along with roughly 200 other countries with the aim of drastically curbing greenhouse gas emissions beginning in 2020. A small team of Trump administration officials is reportedly weighing either going through the three-year formal withdrawal process allowed under the deal, or leaving the larger United Nations Framework Convention on Climate Change of which the Paris accord is one part—a more extreme route, but one that would vastly accelerate America’s exit.

Trump indicated on Twitter that he’ll be making his decision “over the next few days.”

“It’s obvious that when our federal government fails us, local governments have to step up,” de Blasio said. “And if cities and towns and counties and states all over the country step up and agree to abide by the Paris agreement, we can forestall the worst. We can stop what President Trump may be about to do from having a devastating effect on our own people.”

The mayor said that later this week, he will sign the executive order and that the city will partner with “cities big and small around the country to support them in doing the same.” He called this “an important part of what we do this week as we wait for the president’s final word.”

“We saw another statement today that suggested he’s wavering but unfortunately, based on everything else we’ve heard him say in his campaign and since, I fear the worst and therefore we will be ready to act,” he continued.

The Paris agreement marked a global milestone, as countries representing 55 percent of the Earth’s carbon dioxide emissions signed onto a legally binding climate deal for the first time in history.

The agreement called for a long-term goal of keeping the increase in global average temperature to well below 2°Celsius. The deal went into effect in November 2016.

Trump was encouraged to pull out of the agreement by 22 Republican senators, including Majority Leader Mitch McConnell, who sent him a letter requesting that he do so.

Before speaking about the launch of NYC Ferry Service to Red Hook and Bay Ridge—and even before the question-and-answer session—de Blasio reacted to the news, saying that he is “deeply distressed” by it and that it would be “horribly destructive” to the earth and for New York City.

He said that the agreement was “the biggest step forward we’ve taken in many, many years” and noted that Trump is going against the advice of “some of his most senior advisors” as well as that of scientists “all over this country.” He also said Trump should “know better” given that he is from New York City and knowing that such a move “would hurt his hometown more than almost any place else” given that it’s an “entirely coastal city.”

And he connected Trump’s decision to Red Hook, one of the neighborhoods swamped by Hurricane Sandy in 2012. He noted that he and Brooklyn Councilman Carlos Menchaca were in Red Hook “in the days after Hurricane Sandy.”

“Carlos remembers well, he was there, too, that we saw this community disrupted so tremendously by something that was directly affected by climate change,” he said. “There’s no question about it. Hurricane Sandy, Nor’easter, all that occurred in that superstorm was because of climate change. We’ve already borne the brunt here in New York City. It’s gonna get worse if something is not done quickly to reverse the court the earth is on.”

He did not specify when he will sign the executive order, but said the city will continue to monitor Trump’s words and actions as the week progresses.

“Look, we have already set down a series of policies that we’re acting on. I think the executive order becomes more important if he pulls away from the Paris accord. So we’re gonna look to see what happens this week and what he specifically says. We’ll make a determination based on that.” 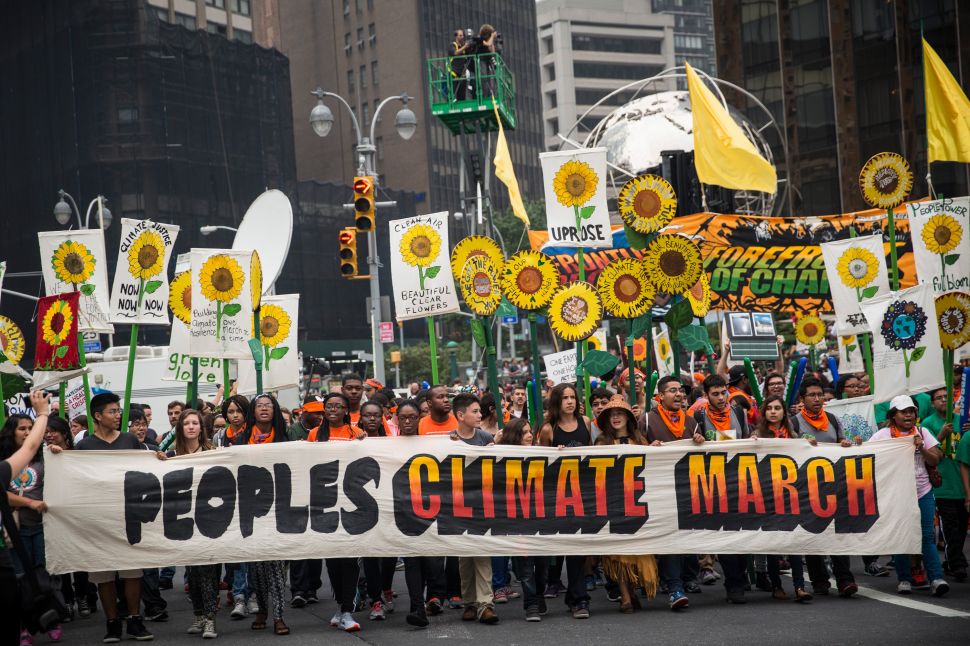