Style, sparkle and splendor are just a handful of the basic requirements that have become synonymous with the annual Cannes Film Festival. And if there’s one man to be relied upon to produce those three things, it’s Balmain creative director, Olivier Rousteing. Typically accompanied by a bevy of beauties who are decked out in his trademark bedazzled, body conscious designs, the designer usually has quite the impressive entourage. This year, Lara Stone, Doutzen Kroes, Maria Borges, Neelam Gill and Irina Shayk posed alongside the designer in an array of floor-length gowns, each oozing old-Hollywood chic.

The key question on everybody’s lips, though: where was Rousteing’s usual Kardashian krew? Not usually ones to shy away from a glittering photo-op, Kourtney and Kendall’s absence from the carpet, but presence in Cannes, was noted, as America’s favorite family has become synonymous with the brand, and its creative director. 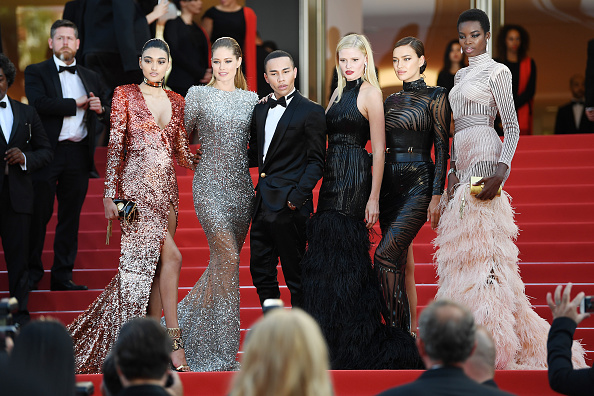