Milan, Paris, London and New York hold their annual fashion shows. The same is true for the big art and design fairs; they happen annually. The world’s top designers and artists get to showcase their talents often.

Not so for the talented designers of the world’s fastest sailboats. Their skills are only on display every four years. This is one of those years and the “runway” starts in a few weeks in Bermuda. There, six of the world’s fast sailing catamarans will be competing for sport’s oldest trophy: The America’s Cup.

Like fashion houses with larger-than-life personalities who love to succeed, the AC35 has Oracle Team USA’s Larry Ellison, one of the world’s richest men, behind it. Ellison has backed several previous Cup challenges, and he is coming to Bermuda with the fastest boat ever—or so he hopes. Oracle is defending the Cup against a yet-to-be-determined challenger who will emerge from the Louis Vuitton qualifying races.

To gain insight into what it takes to create a boat that sails at over 40 knots (46mph), I spoke to Oracle’s design coordinator, rockstar racing boat maven Scott Ferguson. This is Scott’s seventh America’s Cup. Along with contributing to the design, his job is to coordinate all the other design elements.

“The appendages [foils that lift the boat out of the water] are the most critical element of the boat’s design. There is no doubt that the fastest boat will win the America’s Cup, so getting the foils right and creating the lift will make the difference.”

We asked him why this was so and in his tactful reply he did not minimize the importance of the sailors’ abilities or other organizational strengths. Nor was the design aspects of the hulls and ridged sails unimportant. The foils, in addition to creating blazingly fast speeds, provide maneuverability around the tight turns on the short race course.

Scott clarified, “It’s all about controllability. A key function is trimming the fixed-wing sail and controlling the rise of the boat out of the . The helmsman must be able to keep it all together. Capsizing is always a real possibility if something goes wrong.” By the way, Oracle Team USA has already flipped over three times in their practice races.

After the appendages, Scott feels “platform design”—the two hulls and the crossbeams—is the second most important element. These, in turn, support the enormous fixed-wing sail. This sail is comparable to a jumbo jet wing in both size and function. “The goal of the wing design is to maximize thrust and lift the boat out of the , thus minimizing drag.” If Scott and his team do this right, the boat’s hulls will seldom be in the . Instead, the boat will “fly” around the race course on the foils.

Next on Scott’s list is “the mechanisms,” hydraulic controls that allow the foils to come up and down, the rudders to move, and the sail to be trimmed. In days of yore all this was done by hand. Now it is accomplished by complex machinery running on hydraulic power created by the sailors manically grinding on pedestals, using their hands or feet. The excess energy generated is stored in a reservoir. Without this power, the boat would be impossible to sail.

All the AC crews have been in Herculean physical training for months.

The design aspects of Oracle Team USA are tested for years using “computational fluid dynamic (CFD) computer programs. The days of tank-testing hull and sail designs are long gone. Computer geeks write programs that can “instantly predict how a small change in the rudder’s trim tab or the foil’s angle of attack” will affect speed and maneuverability. The goal is to keep the boat upright and sailing fast. “Righting moment is king.”

“There are no givens in this Cup,” Scott says. He thinks all of Oracle’s competitors present a real challenge. There are excellent designers who have built very fast boats sailed by world class sailors.

If you have even a passing interest in sailing, boat design, or the very latest in technology, don’t miss this America’s Cup. It promises to be as interesting as any design competition anywhere.

The qualifiers start May 26 and the AC35 race itself is June 17. Most of it will be televised on NBC. 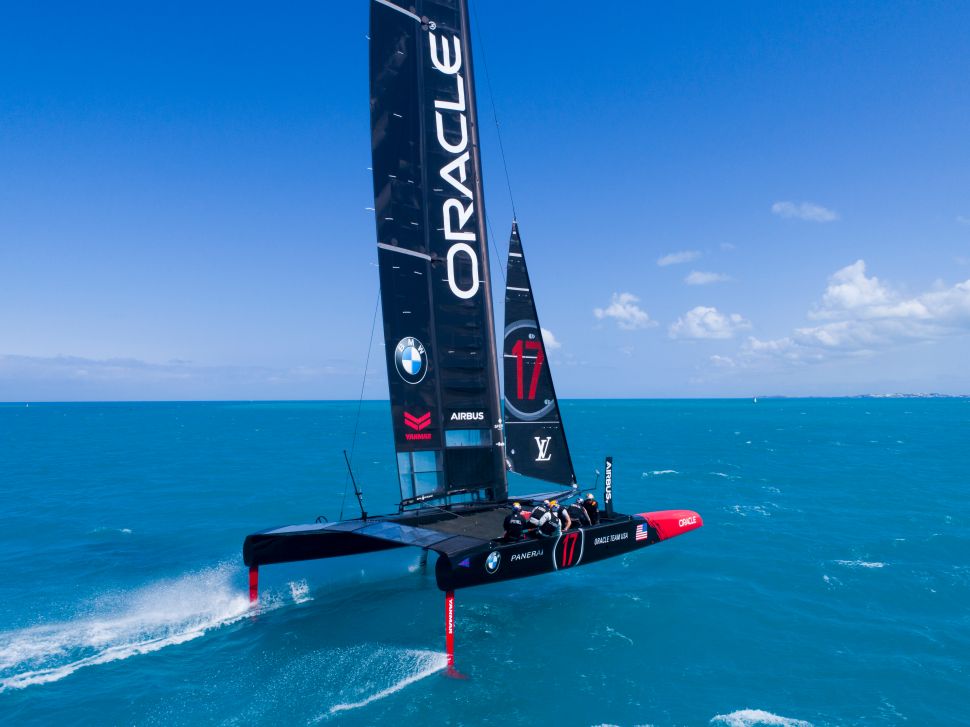