Paul Labrecque always knew he wanted to be a hairdresser, but he didn’t know his name could be big in the beauty business until he met Brian Cantor.

Relatively fresh out of training, Labrecque moved from Miami to London to hone his artistry in the international market. There he fell in love with Cantor, an England-born business and accounting graduate. When the two moved to New York together, the only way for Cantor to get a green card was for Labrecque to start his own company and hire Cantor to run it.

That was in 1988, when they had only 200 square feet in their first space. But after nearly three decades of partnership in life and business, the two have built a salon and product empire that’s the envy of the industry.

Branded under the name Paul Labrecque, the couple now owns several hair salons, including three full-service salon and spa locations in New York City, plus a salon in The Rittenhouse Hotel in Philadelphia, a private executive salon in the JP Morgan Chase Headquarters, and an additional location that will be announced soon.

There’s also the range of Paul Labrecque haircare products, which stand out in the market with a streamlined yet luxurious approach. “Simple is better,” Labrecque says. “Fashion forward and sexy, yet comfortable to wear and easy to maintain.”

Not many hairstyling gurus are pushing a low-maintenance approach to beauty. But Labrecque is not overly concerned with what others are saying or doing. After all, many high-profile stylists have been forced to consolidate or close altogether. Most recently and devastatingly, Ted Gibson announced the closure of his Flatiron salon on December 21 last year, leaving staff without jobs just before the holidays.

Meanwhile, Paul Labrecque goes from strength to strength. This is in large part due to Cantor’s business sense, and his determination to stay ahead of the curve in the industry. His clever deals include partnerships with venues like the elite CORE Club and Chelsea Sports Center in Manhattan, as well as expansion to Philadelphia under a licensing deal with The Rittenhouse Hotel. That arrangement allows Cantor and Labrecque maximum quality control over customer service and experience while outsourcing day-to-day operations to a seasoned management team. Even more innovative was their creation of a private salon for JP Morgan Chase executives at the company’s headquarters. All appointment bookings at that location are managed by clients via mobile app, lifting a major admin weight off the team’s shoulders.

With Cantor driving the commercial details, Labrecque is free to focus on his dream: being a hairdresser. When I first meet him at their salon in the CORE Club, he is unassuming and warm, walking the floor like a worker among workers rather than a big shot. This is in stark contrast to most celebrity stylists, who usually affect an ice cold, regal manner while being trailed by multiple acolytes. Labrecque later tells me, “The hardest part of my work is being a boss. I’m better at being a friend.”

Real friends tell each other the truth. Labrecque adheres to this strictly—even with new clients. I’m there for a cut, but he tells me, “You should get your color done, too. I can take care of those roots for you!” He’s not being catty; Labrecque is truly distraught by the merest scalp shadow. Roots are something of a bête noire to him, and he is not impressed by the recent trend for letting them grow out more obviously. “I dislike that look immensely and wish it would go away!” he says in obvious distress.

Thrilled with my haircut, I travel a couple of weeks later to Labrecque’s Upper East Side flagship for him to sort out my roots. When I tell him I’d like to switch from blonde to brunette right then, please, he is direct but not abrupt. “You really don’t want that today,” he says. “Ease into it. If I take you full brunette right now, you’re gonna walk out of here traumatized. I won’t do that to you.” Labrecque proceeds to give me a superbly blended, rich transition from one color to another.

Meanwhile, Cantor is shuttling between their locations, overseeing operations and meeting with partners. He and Labrecque are both keenly aware of the increasing difficulty of thriving as a salon business in the current regulatory climate. The first time we met, Cantor and I got into a lengthy discussion of how numerous state laws are making it harder for them to operate, and more and more regulations are being passed every year. On our third meeting, Cantor tells me he’s just received another notification from the state of New York, informing him of another new law that will cost the couple dearly to comply with by imposing massive administrative expenses.

At the same time, overheads like rent continue to rise. “It wouldn’t be enjoyable for the client to pay more as regularly as our expenses rise!” Labrecque says. Somehow, the two manage to keep prices manageable while maintaining an upscale, full-service experience and growing their business. But Cantor admits that government and landlords are two of their biggest challenges.

This is where his business nous has paid off for the company. Cantor has been strategic about expanding via licensing deals, building on-demand service offerings, and opening self-sufficient, single-service locations like the JP Morgan Chase private salon. He’s also learned from the avoidably exorbitant routes taken by other companies. For example, the trend of personnel-heavy, overhead-laden blow-out bars that have come to serve as very costly marketing for the products on which certain brands really make their money.

Cantor knows growing their online retail business is also key to the company’s sustainability. That includes being one of the world’s few authorized online vendors for Biologique Recherche, the cult skincare brand with whom they celebrate the 20th anniversary of their partnership this year. Cantor signing them was an early coup that displayed his knack for selecting premium partners.

Labrecque knows how lucky he is to have such a sharp CEO. “I am very fortunate that my husband and best friend runs our business,” Labrecque says. “He does all of that while I’m able to style hair and help mentor and teach our young talent.”

Asked what he loves most about the work, Labrecque doesn’t hesitate. “Developing relationships that are lasting and very strong. I love working on and with people—it brings me joy!” That much is obvious, as he maintains an informal, cheerful repartee with staff and clients alike, all of whom clearly adore him. “Some of my best friends today I first met as clients,” Labrecque says.

Indeed, many of the couple’s friends and clients were present when Cantor and Labrecque married in 2011 on the very day New York’s Marriage Equality Act took effect. The couple had sent out invitations for their July anniversary party the previous March, and when the law was signed in June, they decided to turn it into a wedding. Back then, they allowed national marriage equality campaigners to capture footage of their ceremony and relationship for a video advocating to make the law national.

In the film, Labrecque is blunt about how daily bullying for being gay took a toll on him. “When you’re young and you’re tortured, sleeping is not easy. Sleeping was very difficult. Because you’re always thinking of how you’re going to avoid the situation tomorrow.” And now? “It’s nice to be able to sleep. It’s nice to be able to come to a place and actually have a home where you can start to sleep because you feel safe. When I met Brian, it happened. When I met Brian, my life started to change.”

Remaining aware of what he survived, Labrecque has a special sensitivity for the pain and struggle of others. He and Cantor have gone all out to apply their core talents to helping those who need it most. In June, they launch a partnership with the Hospital for Special Surgery in New York, becoming their exclusive provider of beauty services to patients. And for decades, Labrecque has made house calls to style homebound patients, including those suffering cancer and alopecia. In December, Labrecque and Cantor will again hold their annual makeover event for Sanctuary for Families, a non-profit helping survivors of domestic violence rebuild their lives. Every winter for more than 10 years, the entire Paul Labrecque team has come together for a night to pamper and make over these survivors as they strive to forge new lives and enter the workforce.

It’s clear Labrecque—who has not forgotten the impact bullying had on him—takes immense pleasure in helping build self-confidence in others. With his mastery of hairstyling, he is able to give them a glimpse of the person they never thought they could be. For him, that glimpse came from Brian Cantor. As for Cantor, he shares Labrecque’s gratitude for their unique partnership.

“We very often do not interact much during the day. Paul is tied to being behind the chair, and I am running around visiting locations. But I like knowing he is not far away,” Cantor says, remarking on the “great support” he feels by working in close proximity to Labrecque. For his part, Labrecque is glad Cantor understands the nature of what he does. 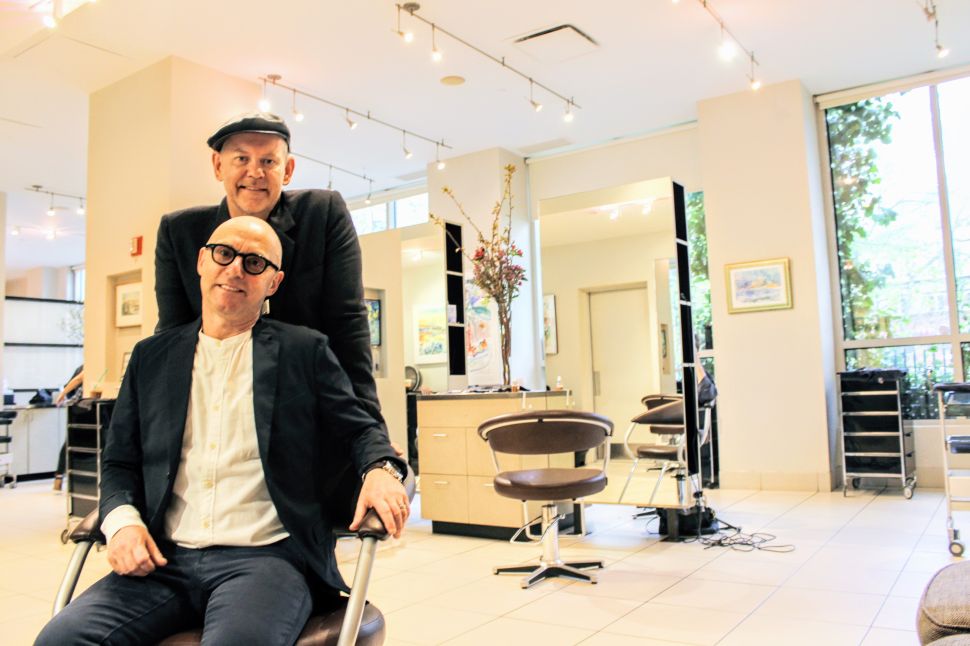