You’re Mike Pence. You’re a career politician, which means you’ve wanted to be President for as long as you can remember. You were picked—unexpectedly—to be Donald Trump’s running mate, but he treated you poorly during the campaign (even randomly wandering offstage during the announcement of your selection). Trump won, to the shock of most—especially you. And Trump is turning out to be even worse than you could have ever dreamed: erratic, unprepared, illogical, irrational, meglomaniacal, possibly mentally unstable.

You don’t want to be part of this train wreck. You wish you’d just stayed in Indiana and taught at Purdue. But, there’s a little-known amendment to the U.S. Constitution that could kill two birds with one stone, removing Trump from office and making you President. The 25th Amendment says that if a majority of the cabinet and two-thirds of Congress determine that the President is mentally unfit to serve, then he or she is removed from office. It was designed mainly to account for times when the President is physically incapable of serving (like when Ronald Reagan was shot) but it did anticipate, amazingly, a scenario like the one we’re in right now.

If you’re Pence, you’d need to (very quietly) convince half the cabinet that Trump is so unstable, he could destroy our country and take the rest of the world with him. And you’d make the case that they’ll each keep their jobs, but without the chaos and embarrassment of serving under Trump. You’ll promise them that when they vote to remove Trump and Trump fires them, you’ll reappoint them as soon as you take office (although some may not believe they can survive a second confirmation process). And you’d have to persuade them that if a majority of Trump’s own, handpicked, cabinet votes to remove him due to mental instability, two-thirds of Congress will easily go along. (The cabinet vote provides enough political cover for roughly 20 Senate Republicans and 100 House Republicans to do what they know is necessary—substantively and politically—anyway.)

But, like everything in politics, you can’t win if you don’t have the votes. Can Pence win over enough Cabinet members to save the day and elevate him to the highest office in the land? Here’s an initial guess (at some point, Vegas will lay odds on this; for now, here’s an initial sense):

Mike Pence, The Vice President: He’s the source of all this to begin with. Odds of a yes vote: 1-1.

Rex Tillerson, Secretary of State: You’d think that if Tillerson genuinely believes that Trump is unstable and if the alternative is keeping his job under a less crazy President, he’d vote yes in a heartbeat. Odds of a yes vote: 3-2.

Steve Mnuchin, Treasury Secretary: Probably not. Mnuchin got on the Trump bandwagon early and he only has his job because he made a smart political choice before everyone else did. Will he do it again? Who knows. Since he’s staking his legacy on tax reform, what he hears from Ryan and McConnell may matter more than anything Pence has to say. Odds of a yes vote: 3-1.

James Mattis, Secretary of Defense: Mattis is a patriot, through and through. He also may be the most sensible member of the Cabinet. Unless his reverence for chain of command makes him incapable of voting yes, he’s a likely supporter to remove Trump. Odds of a yes vote: 3-2.

Jeff Sessions, Attorney General: Sessions was an early Trump supporter. He may also have his own Russia problems. Voting yes could improve his legacy a bit or it could end his career. Odds of a yes vote: 8-1.

Ryan Zinke, Secretary of the Interior: Hard to tell but, since Zinke is a former Navy SEAL, if Mattis and the other military officials vote yes, he could come along. Odds of a yes vote: 2-1.

Sonny Perdue, Secretary of Agriculture: A lot like Sessions—a Trump loyalist but also a career politician. Odds of a yes vote: 4-1.

Wilbur Ross, Secretary of Commerce: As someone who had an entirely different, successful career before politics, Ross has to be concerned about the stench of Trump on his own legacy. Odds of a yes vote: 3-2.

Alex Acosta, Secretary of Labor: Hard to say since he wasn’t Trump’s original nominee, and came out of nowhere. But if he thought he’d have the same opportunity under a sane President, he may go for it. Odds of a yes vote: 2-1.

Tom Price, Secretary of Health and Human Services: A likely no, unless he and Pence have a close personal relationship. Re-confirmation may also not be a given. Odds of a yes vote: 5-1.

Ben Carson, Secretary of Housing and Urban Development: You’d think no, but he was unpredictable enough during the campaign that it’s hard to know what he’d do. Odds of a yes vote: 3-1.

Elaine Chao, Secretary of Transportation: Her vote may be the most important both because it’s a clear signal for where the Senate is (her husband is Mitch McConnell) and, since she served as Secretary of Labor under Bush, she knows what a sane Presidency looks like. Odd of a yes vote: 2-1.

Rick Perry, Secretary of Energy: Same as Perdue and Sessions—should be a Trump loyalist but also a career politician. He’ll put his needs first. Odds of a yes vote: 3-1.

Betsy DeVos, Secretary of Education: She barely got through the Senate the first time, so odds of her being confirmed again seem very low. This means she’s a likely no vote, unless McConnell is helping whip the Cabinet for Pence (or she just hates her job and wants out). Odds of a yes vote: 6-1

David Shulkin, Secretary of Veterans Affairs: Since he was at the agency under Obama, if there’s consensus that Trump is unfit to serve, it seems like he may agree. (Though, it also seems like he’s among the least political of the group, so that could go either way.) Odds of a yes vote: 3-2.

John Kelly, Homeland Security: This would probably be a similar calculation to Mattis, and maybe Tillerson. If Pence can’t get these guys, he’s not calling the vote in the first place. Odds of a yes vote: 3-2.

So, does Pence have the votes? He needs eight total (including his own) to win. In our extremely inexpert and arbitrary estimation, nine members are even money or better to vote for removal. Until more emerges on Russia, Pence probably can’t make his move just yet. But based on our initial review, the crazier Trump acts, the better Pence’s chances of successfully invoking the 25th Amendment. And until Vegas and the bookmakers in the UK start laying real action on each Cabinet member, we’ll keep updating our odds as the circus keeps traveling. 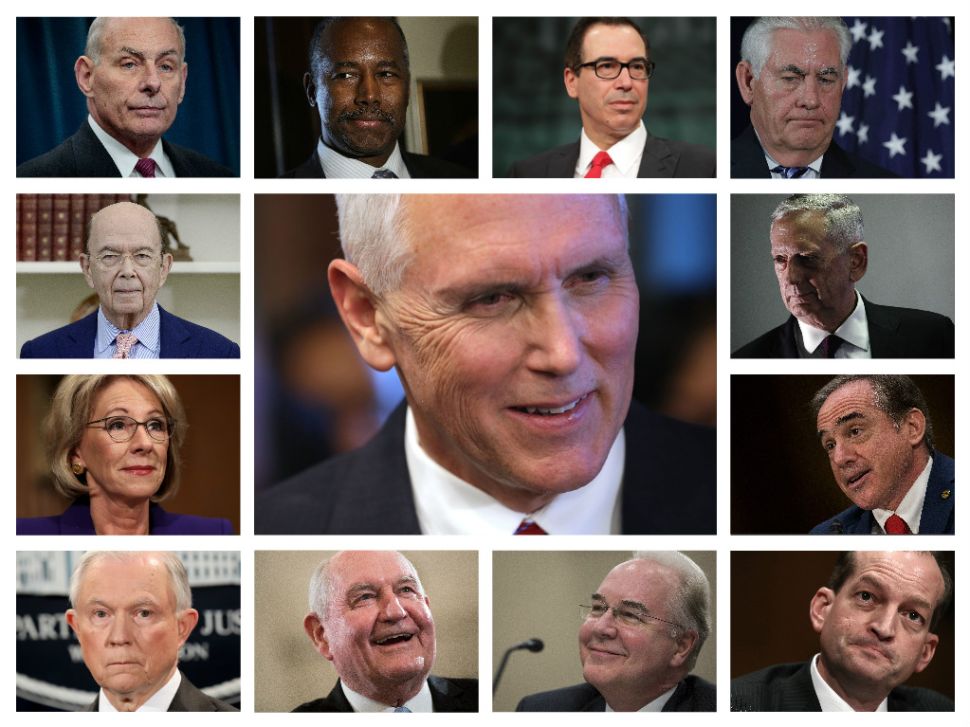