Music, for all its diversity, is based on a remarkably narrow set of variables: pitch, timbre and duration. Arguably even such essentials as harmony and rhythm are in a sense subsets of that protean trio of attributes. And so it was last weekend when two of the most disparate works imaginable were in fact linked by rhythm. Both Johann Strauss II’s operetta Gypsy Baron and Philip Glass’s Madrigal Opera reveled in that most seductive of all Western meters, 3/4 or “waltz time.”

It’s not surprising, of course, that the operetta, presented by Manhattan School of Music, should center on 3/4: the composer, after all, was known during his lifetime as the “Waltz King.” But the score’s most interesting numbers appropriate musical styles associated with Hungarian and Roma cultures, an approach altogether congruent with the work’s unusually sober subject matter. On the surface the piece deals in the usual romantic clichés of lost treasure, mistaken identity and arranged marriages, but underlying the plot are some disturbing questions about race.

The titular “Gypsy Baron” is a dispossessed Hungarian nobleman, Barinkay, to whom a group of Gypsies owes a debt of gratitude because his father rescued them from a pogrom. His marriage to a young Roma woman, Saffi, is declared illegal on grounds of miscegenation. The threat of war, however, unites ethnic Hungarian and Roma in a common cause, though the issue of racial mixing is sidestepped when it turns out that Saffi is the long-lost descendant of a lily-white prince.

Most disturbing perhaps in this work, is the stereotypical depiction of Gypsies as joyous, superstitious savages who are fiercely loyal to their Caucasian “master,” not unlike the way enslaved African-Americans are portrayed in such popular American movies as Gone With the Wind. I would imagine that this piece is currently as tricky to perform in German-speaking countries as, say, Rodgers and Hammerstein’s Flower Drum Song is here. However, MSM’s production, as directed by Linda Brovsky, can be excused from taking a critical view of the work, particularly since the young performers committed so enthusiastically to doing the piece “straight,” as a charming period piece.

You’d expect a college production to find its greatest strengths in the juvenile and ingenue roles, but at MSM it was the character parts that shone. The star comic is the wealthy pig farmer Zsupán—he wants to marry his prissy daughter to a nobleman—and the bass José Maldonado properly stole the show with his super-sized personality and colorful voice. As the mysterious Gypsy hag Czipra—yes, of course this piece has a mysterious Gypsy hag—Michelle boomed out her pronouncements in a wine-dark contralto, and baritone Michael Gracco flung out a similarly massive voice as the bloodthirsty hussar Homonay. Kynan Johns’ spirited conducting sagged only at the point when he had the orchestra interpolate the “Emperor Waltz” to cover a set change late in the plot-deprived second half of the piece. Brovsky’s clean, uncluttered direction faltered only in its insistence that those adorably roguish Roma folks suffered from an incurable case of Happy Feet.

Dancing per se was not a feature of R.B. Schlather’s appropriately minimalistic approach to the Glass opera, performed Friday night at Brooklyn’s National Sawdust. Yet the room was abuzz with movement, the audience swaying, bobbing and vibrating to the composer’s hypnotic patterns of repetition and variation. Schlather’s presentation seemed to encourage this immersive feeling. The audience was seated in randomly angled chairs, with no sense of where the performance would talk place. Violinist Johnny Gandelsman slowly started to play from a music stand in the center of the room, and the music evolved into an irresistibly catchy triple meter, not so different from a classic Viennese waltz.

And then came the coup: from nowhere it seemed, voices hummed and warbled. Eventually the source of the singing became apparent. Scattered through the audience were members of Choral Chameleon, so the music, it seemed came not from them, a discrete set of performers, but rather from us, the assembled audience-participants. I was sorely tempted to join in, so rapturous the performers seemed, but I wisely refrained, recalling that what makes Glass’s music so piquant and powerful is its unpredictability, sudden unexpected and seemingly illogical shifts of harmony and meter.

After a brief intermission, during which the tiny random noises from the “silent” audience loomed as portentously as they would at a performance of Cage’s 4′33″, violist William Frampton entered. His virtuoso playing alternated between a jittery rocking figure and a scale passage that kept varying slightly in mode and resolution. This was not comforting music: a young man next to me tugged obsessively at his t-shirt and, behind me, an elderly woman placed a comforting hand on the arm of her trembling husband.

Unfortunately I was positioned so I couldn’t see the production’s most overt theatrical element, a video projection of the outside of National Sawdust in real time, seen as night gradually fell over Williamsburg. But the message came through clearly enough: duration and the experience of duration are radically different things. The piece as performed felt like it went on for hours, but in recollection, it seems no more than an instant. It’s an open question whether Madrigal Opera is an opera, but I would say this piece defines what separates opera from all other theatrical forms: music, specifically rhythm, as a potent manipulator of perception. 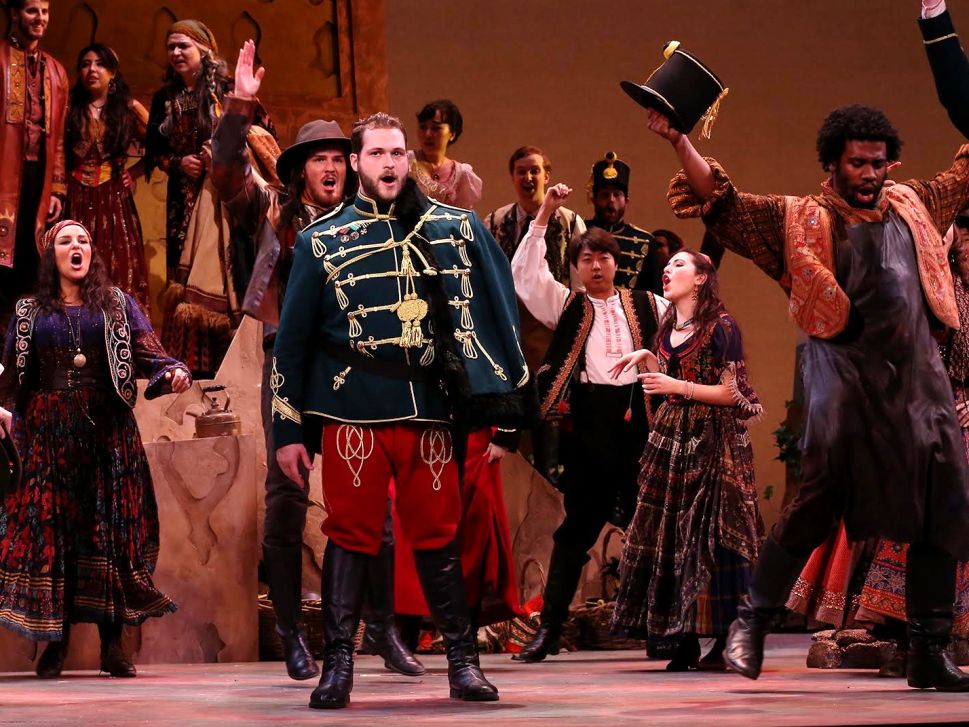