On the web viral images come in all forms, whether an awkward encounter between a president and a pope or a Roman statue taking a selfie.

But the internet’s new favorite photo skirts a very fine line between adorable and deeply concerning.

Police catch a pigeon with 200 ecstasy pills hidden in a little backpack pic.twitter.com/vSB9eYtd84

Sad but true: according to the Arabic newspaper Al-Arabiya, the dirty bird was caught just inside the Kuwaiti border when it crossed over from Iraq (though there were actually only 178 Ecstasy pills in the tiny backpack). Police caught the homing pigeon above a building near the customs department.

Initial social media reaction to the news ranged between “Aww, how cute” and “Dang, that bird’s a gangsta.”

why this pigeon look like its about to promote the most Fyre Festival of 2018 https://t.co/XVLwkqQ27m

This will be someone's mixtape album cover https://t.co/ObKmHxZR0a

bird rave is cancelled who's the narc https://t.co/FJ8RdPvgYk

That's what I call flying high.https://t.co/kLFdWVAmjv

But as hard as it may be to believe, drug smuggling pigeons are actually a real problem: The birds can travel distances of roughly 100 miles, and smugglers take advantage of this by strapping drugs to them before sending them on their way.

The ways criminals use pigeons range from ingenious to repulsive. Brazilian prisoners, with the help of friends and family, attached drugs to the backs of the birds using a small pouch (one prisoner even built a pigeon pen inside his cell).

On the flip side, smugglers in Cardiff, Wales stuffed drugs inside dead pigeons and then threw them into prison exercise yards.

So while there’s no doubt this photo is adorable, the issues it brings up should resonate longer than a viral tweet. 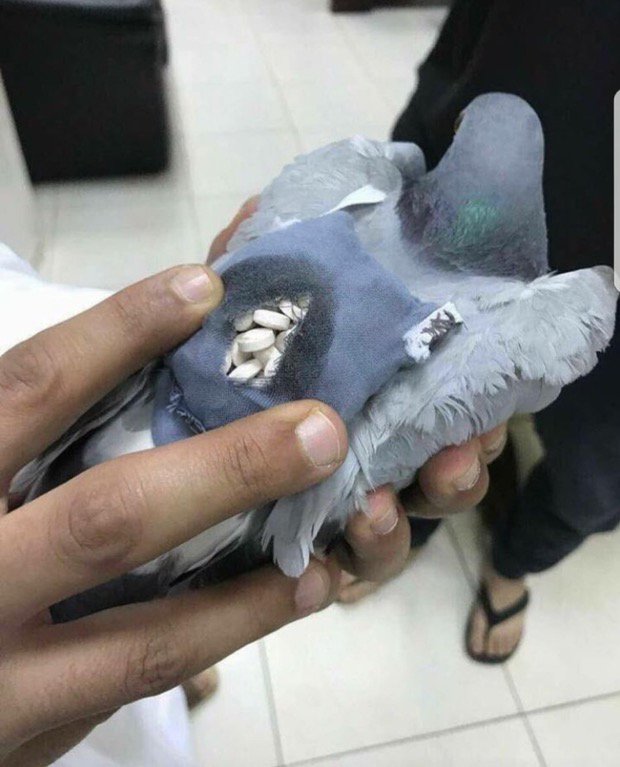