It would have been foolish to think that politics—specifically recent global events such as Brexit and the results of the 2016 U.S. Presidential election—wouldn’t find their way to the Venice Biennial. A prime example being artist Rachel Maclean, representing Scotland at this year’s exhibition, who told the Art Newspaper in December 2016 that she initially intended to make a film about Scottish identity, in the wake of the Brexit referendum. However, politics, like the wind, have the tendency to shift course fast, and so too did Maclean’s plans for her Venice commission when the U.S. elected Donald Trump to be its next president.

For those who visit the deconsecrated church of Chiesa di Santa Caterina in Venice this week during the Bienniale’s opening, Maclean’s final work inside is a far cry from what she first set out to create. Neverthless, Spite Your Face (2017) does explore one of the themes from her initial concept: fairy tales. In this case, it’s the legend of Pinocchio that is reimagined larger than life in bright, glittering color on projected screens inside Santa Caterina. But Maclean’s Pinocchio isn’t cute and cuddly, rather the wannabe real boy grapples with truths and lies in a distorted and grotesque reality, which nods visually to Venice’s baroque architecture and history as well as explores the underlying forces which led to today’s global political climate.

“In Venice there’s a lot of merchandise about Pinocchio. I got quite interested in that fairy tale and how I could use that to talk about ideas and the political idea of post-truth, and something about current political situation,” Maclean told the Art Newspaper in a recent interview. “So the film takes in part of the narrative of Pinocchio and follows Pinocchio-like characters who encounter situations where a normal sense of what is true and what is false is confused, and so [the viewer’s] sense of what are lies and what are truths becomes confused as well. I like that in my work: to have a fairy tale or narrative that structures the other things you can build up around it,” said the artist.

Maclean plays each role in the film herself, under thick layers of makeup and elaborate costume. But while Spite Your Face is a direct commentary on recent events, don’t expect to see Trump, or Theresa May, front and center beside the wooden boy. Maclean did feature a character based on Trump in a previous work, which she created in 2013, but the president’s presence in the film is more subtle this time around.

Rachel Maclean’s Spite Your Face is on view at the Chiesa di Santa Caterina from May 13 through November 26. 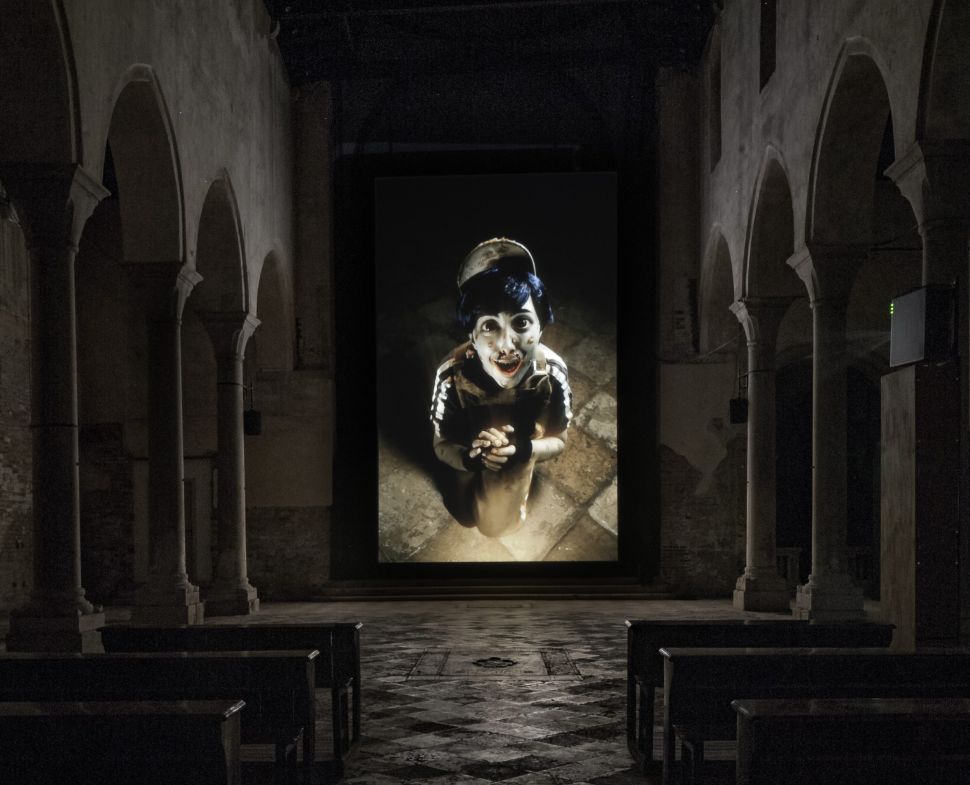