Three episodes in, which means it’s just about time for a character to die. The show promised that one of there characters would not survive the night. The last death was Noel Kahn’s, and it would be hard to top the sight of his head bouncing on the floor. Tonight’s death would go pretty gently into that good night.

On this weekend day, the Liars are pretty busy. Emily and Aria are on a bluesnarfing mission, and their prey is Sydney, Jenna’s old pal, who hasn’t been seen in quite some time. Sydney tells Emily she’s sick of having Jenna in her life – but it’s Sydney who is spotted taking a photo of the Senator’s daughter wearing Hannah’s dress to a charity ball. This should have been a moment of triumph for Hannah, but someone gives an anonymous tip to a fashion blogger that Hannah stole the design. As Hannah puts it, there’s no anonymous without A.D.

Hannah is the focus of the A.D.’s game this week, and she is forced to reveal the new game to Caleb. There’s a knock at the door (a really cool distressed metal door) and outside is a Hannah mannequin, with hideous stitching around its face and a hot appendix. The message from A.D. requires Hannah to humiliate herself at a meeting with potential investors in her fashion line. If she doesn’t comply, she won’t get a puzzle piece for the game. The pieces should add together to solve the mystery.

Absent in this episode was Jenna and her walking stick. But we know that Sydney is using funds from an anonymous donor to pay for an eye surgery for Jenna. We now know that there was a second shooter. And the game itself gets much more frightening with Caleb attempts to tinker with the contraption. As he removes a piece, a toxin sprays his face. No worries: Caleb is not the one to die. It’s not Spencer either, even though her wound bleeds. Plus she gets to make out again with Detective Furey!! She gets the best clothes too this week.

The dead cast member is Yvonne, who maintained a fabulous manicure throughout her coma. She wakes up in time to marry Toby, plan some trips (skating in Moscow…really) and then she’s gone, without explanation. The widower Toby is now available again to be with Spencer. But here’s hoping she makes a go of it with Detective Furey. Incidentally, there was a time when all PLL men were required to parade around shirtless. Memo to Detective Furey re: shirtlessness.

Literary references roundup: Shockingly thin this episode. References are limited mainly to children’s game like Candy Land and Operation. But the episode ends with Detective Furey (so, so hot) unwrapping a man’s severed finger. Just like the toe in Big Lebowski! And a bunch of others! In fact, there’s a charming severed digit listical right here: http://www.listal.com/movies/severed+finger/all

And oooh was the cliffhanger good – guess who’s skulking in the kitchen at Aria and Ezra’s place? Nicole!!! The crazy ex-girlfriend just rescued from the jungle!! I cannot wait to hear her side of the story. 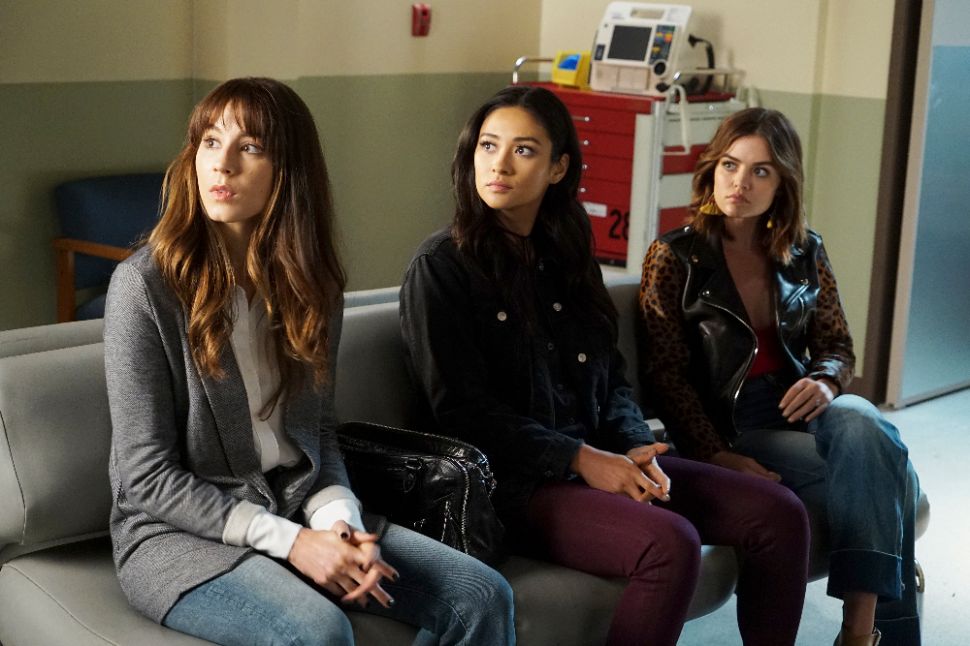