Is it a coincidence that AD has the same initials as Alison diLaurentis? What else could A.D. stand for? The dead Archer Dunhill? Many, many questions were answered tonight, but not this one.

Last week’s episode ended with a dead finger wrapped up in a nice linen napkin, plus a confrontation between Aria and Nicole. Tonight, we learned that the finger belonged to Archer Dunhill, aka the guy Alison was married to before the Liars accidentally killed him and on purpose buried him in the woods. His decomposing finger prompts a murder investigation. The timing is especially inconvenient since Detective Furey (so, so hot) gets the news as he’s lying in Spencer’s bed. Spencer is a suspect. However, Furey did get last week’s memo re: shirtlessness. So, so hot.

But this crackling episode answers many questions, some that fans have been speculating about since last year. Spencer’s dad, Peter, finally returns to town, and his flimsy “passport problem” excuse for not being home earlier is exposed. He’s been looking for Mary Drake, of course. So Hanna and Spencer contact the PI he’s been using and spend a day looking for Mary. The house they visit – it belongs to Pastor Ted!!! Later, Pastor Ted confirms what fans long suspected: he is, in fact, the father of Charles/Charlotte. Interesting – because Charlotte died at the church. Whoa!!

Even more interesting: Lucas and Charles had been close friends in school. Now, I’m excited. Wayyyy back in season three and four I suspected Lucas of deep involvement with A, back when A was Mona…now Lucas allows his unrequited love, Hanna, to live in his swanky condo and backs her fledgling fashion line. Lucas knew Charles. Did Lucas know that Charles was Charlotte?

When Spencer finally confronts her father, Peter, with his lifetime of lies, he tells her this story: that it was Mary Drake who killed Mrs. DeLaurentis. Mary snuck into chez  Hastings to try to see Spencer as she returned from rehab, and stole some of Peter’s medication. She gave it to her sister, killed her, then buried her in the Hastings’ yard. I’m not certain I believe him.

The Liar’s Lament, A.D.’s final game, has been moved to Ali’s house. The game buzzes and shakes, and Ali says grimly, “It’s excited.” Ali completes her task tonight when she is sent to a baby store after she decides to abort her baby with Archer. She gets a puzzle piece when she learns that Emily is actually the mother. Years before, Emily had donated eggs; A stole them. Ali dimly remembers having a surgery when she was in the hospital. Ali and Emily call off the abortion while they decide what to do.

The game skips Aria’s turn, but she does get a disturbing call threatening to expose her to Ezra. She abandons Ali and heads over to meet with the mysterious caller. It’s Sydney, who is clearly doing someone else’s bidding. Sydney tells Aria to join the winning team and give up on Ali once and for all. Aria struggles with her decision, as she is panicked about what Ezra might learn. Once again, the game chooses Hanna to play next. She’s already lost her fashion line and plenty of Lucas’ investment. What else will A.D. ask of her?

Also, Paige is offered a swim coach position at the landlocked U of Iowa, but decides to stay in Rosewood to renew her relationship with Emily. Smooching ensues. Interesting times all around.

Literary references were nil. Fashion stylings were also fairly dull; in fact, Emily has a coffee stain on her smelly shirt. The show has just two more episodes to add back some fantastic styles with the increasingly knotted plot. 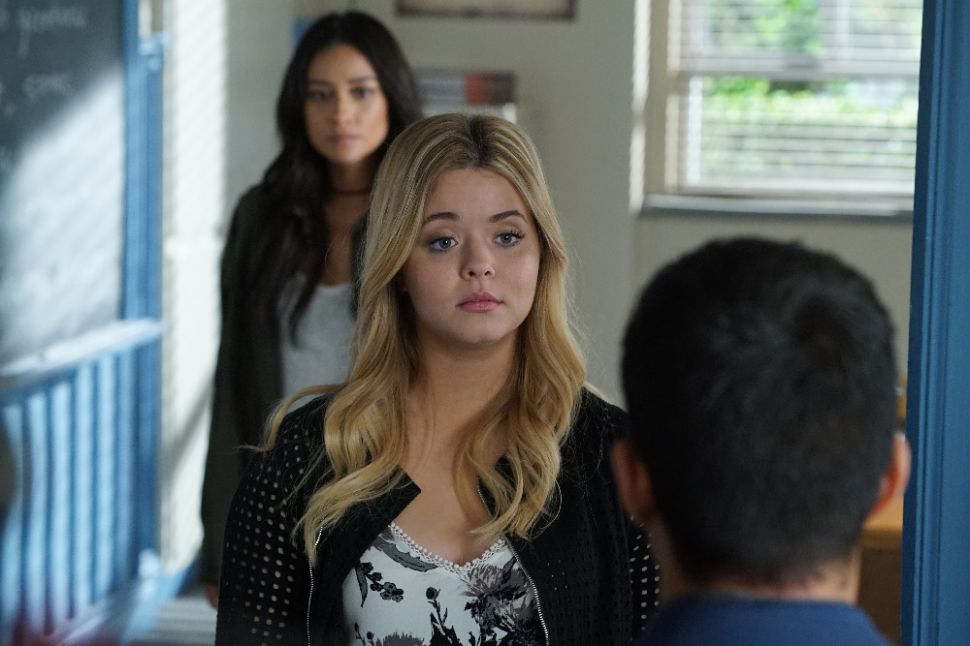