In the race to become the most bromantic buds on the block, French President Emmanuel Macron and Canadian Prime Minister Justin Trudeau charged ahead at the G7 Summit. Now, the diplomatic pair has some serious competition, in the form of Prince Harry and Obama’s recent snap together. Here’s how the companions stack up.

Macron and Trudeau walked past a sweeping landscape while chatting in French together, and followed it up by tweeting kindly about each other. In the past, President Obama was Prime Minister Trudeau’s pal, and so was the royal family. But now the internet is backing a brand new friendship, and Trudeau’s past of attempting high fives with Prince George is long forgotten.

But these two aren’t the only political pair snapping photos this summer. Prince Harry and President Obama shared a photo on the Kensington Palace Instagram account, where Prince Harry hosted the former president. The smiling friends met to discuss mental health, an issue dear to the royal family. They also talked about the Manchester terrorist attack.

Despite the serious topics, the two looked ready for a summer happy hour, sans ties but with big smiles. Macron and Trudeau were far more buttoned up, literally, as Prince Harry had his top two buttons undone for the occasion. The winners might be the royal and the former president, simply because of how comfortable they looked together. Still, they didn’t have the idyllic backdrop.

In the epic fight to have the best dudeplomacy, Prince George and President Obama might still win. After all, blazers have nothing on a bathrobe. 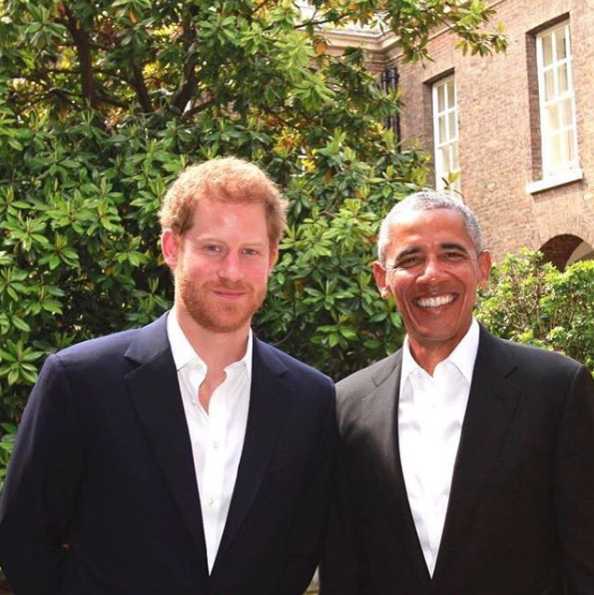