Can you drink alcohol without sabotaging your fat loss or muscle gains—or is the casual glass of wine or beer going to leave you skinny-fat?

It’s a question that leaves most people praying for a “YES” but expecting a “no.”

The truth is somewhere in between. On the one hand, alcohol has some detrimental effects—but these effects can be minimized to allow you to include alcohol in your diet without sabotaging your progress.

Personally, I don’t drink often, but now and then I do enjoy a drink. You know, that ice-cold beer at the season’s first BBQ? That’s something I actively look forward to.

There is no doubt drinking is a cultural ritual, interwoven with feelings of relaxation and joy in the company of friends and family. In fact, for many, drinking is deeply associated with connecting on an emotional level, being able to be yourself, and letting the stress of the world melt away—even if just for a moment.

It’s more than just “alcohol” or “a drink,” it’s the bigger picture, the moment and the experience that accompanies it. So, when you’re told that your new workout and diet plan requires cutting all alcohol, all the time, it’s no wonder you want to push back.

I’m not going to tell you that you have to be teetotal.

I understand the pressure of social situations where it’s almost an obligation to have a drink—a social convention, if you will. You’re expected to drink, so you do.

To say, “don’t drink” makes it seem easy—and, in principle, it is—but life is rarely that cut and dry. Alcohol isn’t always binge-drinking and puking in a corner; for many it’s a release or an escape enjoyed in moderation.

In addition to exploring the research and laying out the facts I’m going to provide you with an action plan to use on the days you do want to drink, in order to minimize alcohol’s negative effects and keep you on track to reach your goals.

What happens when you drink?

The alcohol is then metabolized by your liver, where enzymes break it down into acetate.

How does alcohol impact your health?

Alcohol is often associated with bad health and rapid weight gain. While there are some negative effects, research shows that it’s not all bad and there are some health benefits to drinking alcohol.

In fact, consuming 1-2 drinks a few times a week has been shown to improve insulin sensitivity, reduce the risk of hypertension, support cardiovascular health (1, 2) and even slightly improve your immune system.

I’m not suggesting you drink every day, but I do want to show you that there are some benefits to drinking alcohol. Arguably it’s healthier to drink occasionally than it is to remain teetotal.

What does this mean for fat loss?

However, research shows that, due to the high thermic effect of alcohol, the actual amount metabolized by the body is about 80 percent, making the actual calorie count closer to 5.5 kcals per gram.

As previously mentioned, when you consume alcohol, it is processed by the liver and broken down into a substance called acetate. Acetate is toxic and, as a result, your body prioritizes the metabolization of alcohol above everything else.

Given this, you’re probably wondering just how fat alcohol will make you.

Here’s the truth: While alcohol tends to lead to an “increase [in] food intake, (probably through enhancing the short-term rewarding effects of food),” alcohol itself is not necessarily the lead contributor to weight gain. Researchers give more weight to an individual’s “personality and habitual beverages preferences.” (1, 2)

So, if you drink high calorie drinks every night in moderate excess, you probably will gain weight. Not to mention, your decision making when drunk isn’t exactly going to be 100 percent—so you’ll tend to overeat as well as over drink, which will lead to rapid weight gain if done regularly.

However, if you drink lower-calorie drinks less frequently, alcohol likely won’t contribute to weight gain. Remember, alcohol suppresses fat oxidation, which allows your body to store fat and carbohydrates more easily—but the conversion of alcohol into fat is minimal.

This correlates with the bulk of research: “Experimental evidence from several metabolic studies showed a suppression of lipid oxidation by alcohol and thus the enhancement of a positive fat balance. The non-oxidized fat is preferentially deposited in the abdominal area. The experimental metabolic evidence suggests that the consumption of moderate amounts of alcohol has to be accounted for in the energy-balance equation and may represent a risk factor for the development of a positive energy balance and thus weight gain.”

Alcohol itself doesn’t make you fat; it’s all the calorie-rich foods you eat with abandon when you’re drunk that that makes you fat (i.e. a calorie surplus).

In this action plan, let’s look at exactly how to drink with minimum detriment to your goals.

How does alcohol effect muscle building?

Good news so far, but this isn’t the full story. To get a full picture on how alcohol effects muscle building, we need to look at the impact is has on testosterone, recovery and performance.

You’d be mistaken for thinking that a drop of alcohol will eliminate your testosterone, ruin any chances you have of building muscle and turn you back into a weak child.

Alcohol is so often touted as a testosterone killer and a severe no-no in the fitness industry—but is it as bad as you’re led to believe?

One study conducted a “randomized, diet-controlled, crossover study, [with] 10 middle-aged men and 9 postmenopausal women, all apparently healthy, non-smoking, and moderate alcohol drinkers. [They] consumed beer or no-alcohol beer with dinner during two successive periods of 3 weeks. During the beer period, alcohol intake equalled 40 and 30 g per day for men and women, respectively.”

At the conclusion of the study, researchers recorded that there was only a 6.8 percent decrease in testosterone for men and no reduction measured for women.

Let’s put this into perspective: One drink is considered to be about 15 g, which means these participants were consuming 2-3 drinks a day for at least three weeks. After all that, alcohol testosterone levels decrease by 6.8 percent for men and not at all for women.

Another study gave eight male volunteers 1.5g of alcohol per kg of bodyweight, totaling an average of 120g or ten beers over a three-hour period.

This resulted in a drop in testosterone of 23 percent between 10-16 hours after the drinking had started.

What does this mean?

Well, I think we can quite safely say that unless you’re going binge drinking regularly or on some sort of three-week alcohol retreat, the occasional after work drinks are not going to interfere with your muscle building.

What about protein synthesis?

Research here is pretty limited and the main study I found was conducted using rats.

However, the study did find that alcohol reduced the rate of protein synthesis—but it’s hard to say conclusively what this means for humans; it could be an indication of alcohol’s ability to decrease protein synthesis in humans, but it could mean be nothing.

Upon further research, I found an additional study that measured the effect of a protein and alcohol mix on protein synthesis after working out.

In the study, eight males performed the following workout:

Immediately following their exercises, and again four hours after exercising, they consumed one of the following:

In addition, the participants also ate a carbohydrate-heavy meal (1.5 g per kg of bodyweight) two hours after exercising.

The results showed a decrease in protein synthesis for both the alcohol and protein group (24 percent) and the carbohydrate and alcohol group (37 percent).

In any case, more research is need.

At this juncture, a logical conclusion would be that drinking post-workout is best avoided, and if you are going to drink post-workout you should keep the number of drinks to a minimum. If you do this, it is likely that the impact on protein synthesis will be low.

How does alcohol impair your performance and recovery?

One study showed a loss in force production and impaired recovery after consuming alcohol.

However, you can’t put much stock in this study, as participants performed “300 maximal eccentric contractions,” which is a brutal training regime and an unlikely methodology for the average gym goer.

It’s safe to say a volume that crazy—especially using eccentric reps—is going to be hard to recover from regardless of alcohol intake.

Another study found a reduction in glycogen storage with acute alcohol (1.5 g per kg for a total of 110–120g per participant) consumption after exercise.

But again, participants were subjected to tough workouts consisting of two hours continuous cycling followed by four all-out 30-second sprints with two minutes of recovery in between. The alcohol intake was again excessive, and three participants had to withdraw from the study due to vomiting as a result.

What does this mean for you?

Unless you’re planning on smashing out a ridiculous number of eccentrics, performing long endurance feats and guzzling 10+ drinks, none of this really applies to you. This doesn’t mean you have free reign to consume 6+ drinks and expect to be fresh and ready to go, but relaxing with 1–3 drinks on occasion is okay and will have little-to-no impact on your recovery.

Below are the exact steps you can use to enjoy a few drinks without excess fat gain. However, please note that this plan is ineffective and cannot help you lose fat or preserve muscle if you drink too often.

I strongly recommend you use this plan once a week at the most.

STEP 1: Know when you will be drinking, as putting this plan into action will be impossible with spur of the moment drinking.

STEP 3: Keep your carbs to 10–15 percent of your daily caloric intake (or 1.5g per kg). Get your carbs from vegetables.

STEP 4: Eat lots of protein; at a minimum hit your usual daily protein goal. Stick to lean sources as this will keep fat low, while helping with satiety.

STEP 5: When drinking, stick to low calorie options, like dry white wine or clear spirits with a diet mixer.

STEP 6: Don’t go crazy; nothing will save you from an all-out binge. Know your limits and don’t let one night impact the next 2-3 days.

Fitness is what you do 90 percent of the time. Don’t worry if you slip up on your diet, overindulge, or drink too much on occasion. Instead,of spiraling into a negative, shame-filled slump with day-long fasts and restriction, just focus on getting back to your normal routine as quickly as possible.

Try to reflect and understand why it happened. Maybe you were particularly exhausted and willpower was low, maybe you were celebrating something—whatever the reason, if you can understand it and move on, you’ll be fine.

The bottom line: unless you’re drinking every day for prolonged periods or drinking infrequently but excessively, then the effect on fat loss or muscle gain will not be significant.

Theo is the founder of Lift Learn Grow, a blog that helps you build the body of your dreams without sacrificing your lifestyle. With a focus on lifting heavy weights and eating the foods you enjoy Theo helps you reach your goals and love your journey. Join a growing community of like-minded people and get the tools you need to build the body you want. 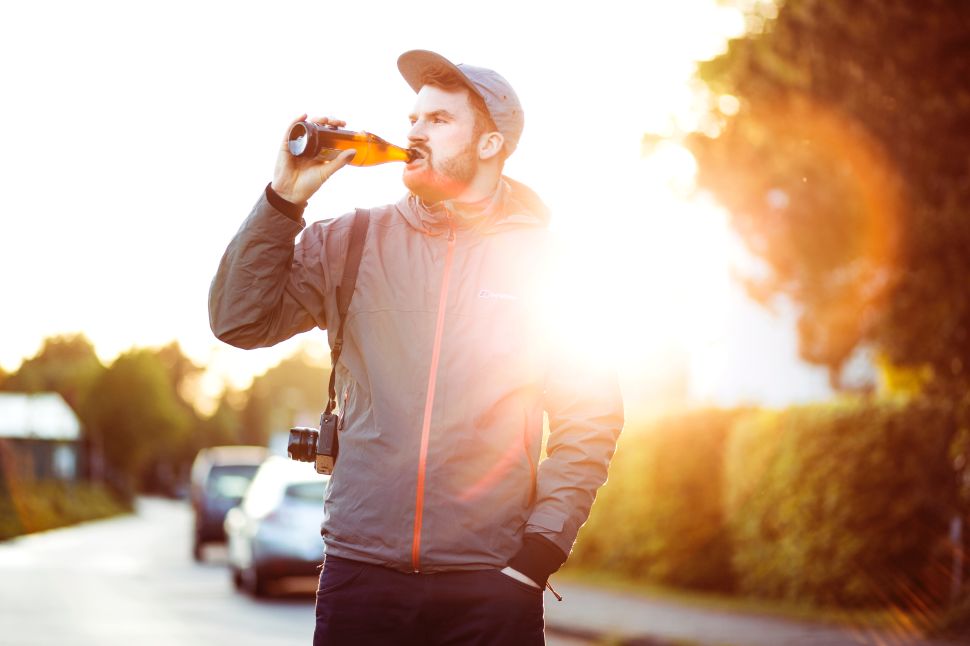