Do you, like me, fantasize about moving to Kate Winslet’s cottage from The Holiday? Do you daydream about marrying Prince Harry, mostly so you get a chance to wear gorgeous Chanel suits? Do you salivate at the thought of homemade jam and clotted cream?

If you, like me, have already worked your way through The Crown and The Great British Bake-Off, there’s another offering on Netflix of which you should be aware: Call the Midwife.

I had mentally avoided Call the Midwife even though I had seen it in Netflix’s queue of British TV shows and was vaguely familiar with its name, attached to a half-recollection of someone telling me it was good. To put it frankly, it seemed… a bit dreary. Sure, The Crown also took place in the 50’s, but it had the fantasy of royalty and gorgeous clothes to pull you in past the slow, almost non-plot. There is no fantasy in the dingy East London of Call the Midwife, no palaces, or gorgeous gowns when all of the women are either in nun habits or nursing uniform.

But, and I promise you this, if you enjoyed The Crown, you will love Call the Midwife. The settings might be complete inverses of each other, but they share a stiff-upper-lip sensibility of a young woman with perfect vintage curls doing her duty for the country. There are small flirtations, cakes, friendships, and dancing (there are also far more enemas than in any other show on Netflix). There are bitter and heart-wrenching moments, as you might expect for a show that focuses on the thin line between life and death. Even in a show about poverty, that touches on tragedy so regularly, it leaves you buoyed by faith in mankind (and in envious awe of Britain’s healthcare system). It captures a quintessentially British spirit, or at least, an American’s idea of it: of stoic acceptance and finding joy in dark times through community and service. 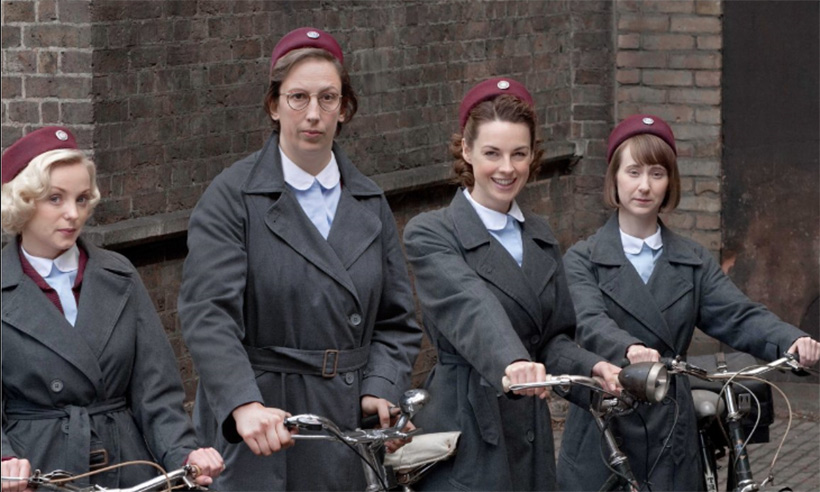