This episode began on a sweet, if tragic note. Dorinda was in the Berkshires, where she was visiting the cemetery of her late husband, Richard. It’s the 5th anniversary since his death, and she was holding a memorial for him. In attendance were her parents, her daughter Hannah and…Carole?

Yes, Carole. Which was so strange mostly because Dorinda had, right before Carole showed up, stated that John was not invited because it was a family thing. But then again, Carole is strangely obsessed with Richard (probably as much as Dorinda is obsessed with Carole), and an entire camera crew was invited as well to film this, so what’s one more cast member to help ensure that this scene won’t end up on the cutting room floor?

Because this scene is important to Dorinda’s narrative, especially after her behavior towards Sonja in the Hamptons. The memorial was beautiful: Dorinda’s love for him and her coming to terms with his death was a moment of vulnerability. And what these Housewives often forget is that vulnerability may expose you to harm, but it also paints you as a sympathetic character that the audience can relate to.

And even though I don’t particularly like Dorinda, nor her obnoxious daughter, it’s moments like these that help viewers understand who you are and how you came to be. One gets the sense that Richard was the best thing to ever happen to Dorinda. With his big heart and his overly generous pockets, giving his last dollar to every downtrodden person he met, Richard made Dorinda a better person. Richard’s death rattled Dorinda and Hannah’s lives, breaking them, leaving scars that toughened them, that made them harsher and emotionally closed.

If Richard were still alive, would Dorinda be as unlikeable as a character? Does John bring out the worst in Dorinda (and, for that matter, Hannah)? I can’t be sure, but this memorial certainly indicates as much.

So we get back to the city, and there’s yet another moment where a Housewife seems out of place. Luann has a big wedding dress reveal with her family and…Dorinda. Even Dorinda felt obligated to mention that she didn’t quite belong. But then again, this was a “bridesmaids” event (and Dorinda is a bridesmaid) so I guess it’s not too crazy.

As for the wedding dress, I was kind of underwhelmed. I mean, Luann has a banging body, so she looks amazing. But for someone who has never worn a wedding dress and who wants the “fairytale,” the dress was too classic, too simple.

Over on the streets of the Upper East Side, Tinsley realized that the time has come for her to leave Sonja’s townhouse. She doesn’t want to overstay her welcome. But it seems that Sonja’s hurt by the notion that Tinsley wants to leave so soon. Beyond the fact that Tinsley is afflicted with the inability to express her needs (or even ask about the house rules), Sonja is left bereft of interns. A lack of interns means her crumbling Grey Gardens townhouse will continue to decay and the ice will continue to turn from yellow to brown. And Sonja’s greatest fear is the fear of abandonment, the fear that she’s not needed. And try as she might deny it, Tinsley flexing her wings in an attempt to be independent scares the shit out of Sonja.

Back downtown, Carole and Bethenny lay sprawled on Carole’s slashed and torn couch which was being used as a scratching post for the feline “Baby”s. They discussed their love lives (or lack thereof): Carole and Adam were going through a rough patch, trying to figure out the future. And Bethenny struggled with an unstable relationship with her ex. And that relationship is why Bethenny has zero desire to make up with Ramona.

Even when Bethenny returned to this show a few years ago, there were many acknowledgments that Ramona does terrible things, and that Bethenny had learned to roll her eyes and accept them. But I think that Bethenny is fed up with pretending that all is well. They may be co-workers, and she’ll go to the televised night out with her co-workers, but she’s done keeping up the illusion that they’re actually friends.

So all the women go out because Dorinda, seeing that the first dinner didn’t go so well (when both Ramona and Luann attacked Bethenny), naturally thought that a get-together over drinks would be just what these women needed.

But Ramona seemed ready for a fight. She began going after Luann, saying that she bought a ticket to Palm Beach and, therefore, deserved an invite to Luann’s wedding. When Luann didn’t give her what she wanted, she went in for the kill, Mama Joyce “word on the street” style. She told Luann, in a half-light-hearted, half-dagger-tipped voice that people were taking bets on whether or not Luann would get married. Luann, naturally, responded that this was exactly why she didn’t want Ramona to come.

Because Ramona is, quite frankly, a spoiled teenager; the kind of person who has zero self-awareness, who is willing to stoop incredibly low to get what she wants. But as she saw that everyone was shocked by what she said, she quickly covered it up, getting all lovey-dovey with and acting happy for Luann.

But the strangest part of that scene wasn’t that Ramona acted a bit crazy to cover up her previous “evil” craziness, it was that Luann got over the incident pretty quickly, even having an intimate conversation with Ramona soon after. Perhaps it can be explained away as “the enemy of my enemy is my friend” canard. Especially because that private conversation was about their mutual dislike and contempt for Bethenny.

But I think it goes deeper than that. I believe that Luann and Ramona see this show as a job and play to the cameras. They have a superficial relationship, and that relationship is useful in that it can be weaponized against others. They both consciously use conflict and manipulation as a tool to get the crew to film them and for the producers to keep that footage. They know that it’s easier to scheme and manipulate when they work together. So it’s easy for them to pretend that they are easy-going and are not super sensitive, when they actually are super sensitive. They use their relationship to prove this fact, even as their other contentious relationships on this show prove otherwise.

As soon as Luann leaves, Ramona sidled up to Bethenny and began berating Bethenny for daring to be upset at Ramona for trying to embarrass her. Bethenny was having none of it, politely shutting down the conversation.

Ramona is one of the biggest projectors on this show (well, other than Luann). When she talks negatively about others, she unknowingly describes herself. Like when she told Bethenny that Bethenny can dish it, but not take it, as she baited her with comments like “you’re so weird.” As soon as Bethenny bit back saying, “you’re not very self-aware,” regarding the way Ramona spoke to Bethenny, Ramona couldn’t handle it. She went quiet, talking slowly, like a warning for what’s to come. And then the claws came out as the real reason Ramona felt Bethenny wasn’t allowed to be upset surfaced: because she nursed Bethenny back to health last season, all should be forgiven.

But what Ramona doesn’t realize is that life isn’t about tit for tat. You don’t hold something over someone else by virtue of doing something nice. That’s not how it works.

So Bethenny walked away and left. Which only made Ramona get more hysterical, her nervous energy at full blast as she jerked around, mocking Bethenny, in a Banshee-like shriek directed at Bethenny’s retreating figure. She knew she lost, and so Ramona searched for comfort, for reassurance that she was still loved, that she was the amazing person she believed herself to be. So she fell down, onto Carole, as if to cuddle her. But, as evidenced by Carole’s reaction, it looked more like a choke-hold. 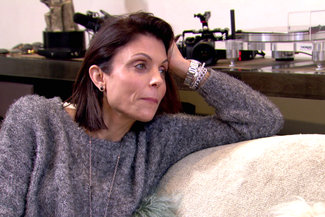