You know the saying, “If it ain’t broke, don’t fix it”? Well, the opposite holds true: if it’s broke, please, I beg of you, do not try to fix it. It’s one of those eternal questions that never get answered on the Real Housewives franchise. Why do they pretend to want to host “drama-free” parties and events, when the drama guarantees that the event will make the final cut? Why do they get upset when the other women speak about them when they know that they are contractually obligated to talk about each other, for better or for worse? And why do they keep trying to host the same stupid event every season with the same stupid people hoping for a different outcome?

Take Dorinda’s Berkshire’s mansion. First off, the house may be beautiful, but there’s something so creepy, something so off about the old-world Gothic architecture, the sheer size and maze-like quality of the house, that I’m shocked no one has reported unexplained door openings and closings, disappearing objects and/or strange noises. Like any proper haunted house, it is crowded with unnecessary tchotchkes. Each themed room has at least a dozen different “decorative” items that, when clumped together, feel less like decor and more like unneeded clutter. It’s like the country version of Sonja’s crumbling Grey Gardens townhouse.

During the holiday season, when Dorinda takes the women with her, her home turns into the horror film version of Santa’s workshop: aged, melting porcelain angels are scattered throughout the home, kitschy light up balls that serve no purpose adorn a wall, and tinsels or lights are attached to every square inch. And even as the fire crackled in the hearth, and as Dorinda playfully acted anal about the placement of the lights in her Christmas tree, the constant shots of the sharp icicles clinging to the edges of her home served as a foreboding reminder that all was not well at Medley Manor. Suffice it to say, Dorinda’s Bezerkkshires trip is less country retreat and more The Cabin In The Woods, with the Housewives acting as Dorinda’s yearly sacrificial lambs in honor of her birthday.

Even so, Dorinda decided to try and “make it nice,” (a sentiment unironically expressed on her mashed, mangled mess of a birthday cake sent by the bakery – which, quite frankly, should have been a sign that this party would turn into a nightmare). But it was an effort doomed to failure from the start. Sure, she tried to be “strategic” and have the women come up on separate days and in separate groups to avoid conflict. But if they all end up in the same creepy house, under the same creepy roof, at the exact same time, that’s hardly “strategic” because they still have to spend undue amounts of time together in an environment that was literally made to foster conflict, or, at least, be the setting for an Agatha Christie murder mystery.

On the upside, Sonja was invited so we don’t have to hear her kvetch about it all season. However, Sonja was hardly the fun floozy we have come to know and love. After only a few hours, she began bitching about her roommate, Tinsley.

In recent seasons, I have become solidly pro-Sonja. In the past, she was delusional and pretentious; a gaudy mess of a woman living in her past. She felt like a less evil version of Luann (and was, unsurprisingly, close with that lizard Queen). But she has really grown over the last few years. She curbed her drinking, her fog of delusion lifted and suddenly she was possessed with a searing insight into the actions of her colleagues.

However, Sonja in the role of hostess is a bit of a nightmare. She wants Tinsley to be less of a guest and more of a glorified intern: making Sonja coffee in the morning, taking her out to dinner, be at her beck and call.

And she is upset that she wasn’t invited to lunch with Tinsley’s mother (who, by the way, is a riot and is like a less pretentious, more eccentric version of my favorite southern belle, Patricia Altschul, the grand dame of Southern Charm. And she brings out Tinsley latent Southern accent which is super adorable).

But that’s not all: Sonja’s upset that she speaks with the help, the servant. Because Tinsley supposedly distracts Connor from the unpaid duties Sonja’s outlined for him. I really don’t understand what Tinsley did wrong here: all she asked was if the doorbell rang, and it happens to be a delivery of hats, could you bring them inside? Besides, it’s Connor’s job to answer the door. Who cares if it’s for Tinsley’s stuff?

Uncharacteristically for Sonja, she began yelling at Tinsley in Dorinda’s kitchen. But that could have just been the demon speaking. The one that enveloped Sonja’s soul as she stuck her head into the fireplace in an attempt to open the “flu,” or whatever the hell the thing is that makes the smoke rise out of the chimney. She screamed at Tinsley that Connor doesn’t work for her, that she’s an ungrateful houseguest, that she feels taken advantage of. Tinsley stormed away, and, as swiftly as the demonic being entered, it left, leaving Sonja back to her floozy, boozy self: she languorously stuck her finger in a bowl of mashed potatoes and had a taste.

Just as that drama continued to brew, team B arrived: Bethenny and Carole pulled up into Dorinda’s driveway, already planning their potential escape. Luckily Bethenny’s new boyfriend, Dennis, sent some floral support. They quickly stole away to their accommodations to discuss the gossip of the day which, unsurprisingly, revolved around Tom.

See, the women here planned some sort of intervention (and their protestations to the contrary doesn’t obfuscate that fact). Everyone there, even Ramona and Bethenny who are on the outs, have converged on Dorinda’s creepy Berkshires home to give Luann the facts about her cheating fiancé.

But, because of Luann’s reaction last year, and Dorinda’s subsequent declaration that all gossip should be given to her to deliver it to Luann, the women gathered together in Dorinda’s living room and sat Dorinda down to tell her what they knew.

Carole asked her if she’s heard of Luann’s pre-wedding jitters, because Luann’s friends have told Carole that Luann was. Of course, head-in-the-sand Dorinda has not heard anything about these pre-wedding jitters. And then Ramona leaned in close like she was about to lay down the gauntlet, twisting storylines to suit her agenda. Ramona’s relationship with Tom’s old girlfriend has borne fruit – leading a steady stream of jilted lovers and tongue-mashing flings right to Ramona’s door. Or, in this case, to her phone. She showed Dorinda text messages from a woman who Tom has groped very recently, supposedly after a fight with Luann.

I don’t buy that any of these women genuinely care about Luann. But that’s mostly because I don’t feel that Luann has any genuine friends. Even Dorinda strikes me as more of a fair-weather friend who aligned with Luann for convenience.

Either way, Dorinda is skeptical about this information. Which is why when Luann arrived straight from her Palm Beach trip, Dorinda sat her down privately (well, as privately as can be when you’re being filmed for a national audience) before dinner to discuss what the women told her.

But Dorinda doesn’t really go into the details, which was smart. She quickly skimmed over what the women said. And then she simply asked Luann, with everything people are saying, do you still trust him? Point blank. Because Dorinda doesn’t screw around.

Luann’s response? She totally does. The problem with this sit-down is that it’s on-camera. And Luann is all about appearances. Why on earth would she admit on camera that she’s scared to marry an unfaithful man, a man who cares more about fame than he does about her? Luann is in this so hard because she has so much to prove. Like I’ve said before, she doesn’t care that Tom committed these acts, she cares that people are still talking about it and not letting her indulge in her fake fairy tale.

It’s not that Luann is indeed in love, she’s married to the idea that she’s in love. I mean, just look at the way she interacts with Tom. Sure, at first, the giggles and cutesy grins seem like puppy love, like they’ve rediscovered what it’s like to meet your first love in middle school. But stare a little longer, peer beneath the surface, and there, clear as daylight, the signs that something’s deeply wrong is plain to see. Even as Luann leans in to Tom in supposed affection, she pushes him away. The cutey grins and giggles are overly forced, even awkward. When the cameras are down, Carole noted to Ramona earlier in the episode that Tom seemed overeager, while Luann seemed disengaged from it all. But the moment the camera points in their direction, they push themselves on one another, like a pair of bad actors in a B movie.

And just as Luann angrily slams the other women for speaking badly about her relationship, Ramona breezily walked in, blissfully unaware of the maelstrom of hate about to be directed toward her. And that’s where we end. Well, the screen flashed a “to be continued,” which always means it’s just going to get worse. Welcome to the Bezerkshires, let’s hope we all make it out of here in one piece. 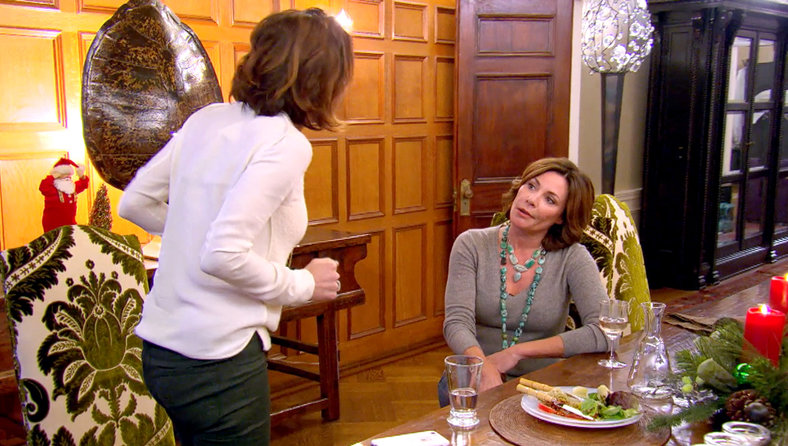