Tinsley Mortimer just wants to have fun. Or, rather, she just wants to suck face with a baby-faced prep school boy who could easily pass for her son. But Sonja, the long-suffering mother who wears a silk robe as she downs some gin, disapproves.

Because Sonja feels ownership over Tinsley, she alternatively acts like a possessive parent who questions what time Tinsley got home the night before, and like the big sister who is trying to get rid of her pesky little sister. It’s a weird dynamic that leads Sonja to openly question why Tinsley would go out with such an inappropriate match, as if Sonja has a right to interfere in Tinsley’s love life.

But Tinsley really should be able to do what she wants, even if that means she wants to bone a guy named Chad whose bland good looks are as forgettable as their conversation. Since the attraction is purely sexual, their conversation consists of Tinsley giggling and then smooshing her mouth all over Chad’s face. But because she can’t bring her new conquest back to her place, she’s forced to dry hump him in the club where they met and, later, at the bowling alley where they go on a date.

But it’s not entirely Tinsley’s fault that she ended up with a guy who probably has watched Mrs. Robinson on repeat. She went to the bar with the worst wing-women in history – Ramona and Sonja. Ramona, in particular, after years of repression under the thumb of Mario, tries to teach Tinsley her tricks, which include giving a boner to Chad right before Tinsley made her move.

Speaking of Ramona, her daughter Avery has always been the best thing about her. She’s level-headed, wise enough to know that her mother tries to buy things that are ill-suited for her age like trendy sunglasses, and has always been able to call out her mother on her bullshit. If there was ever something Ramona has done right in her life, Avery was it.  Because Ramona has the emotional intelligence of a five-year-old, Avery is often forced to be the adult in the relationship. As we’ve seen over the years, Avery’s role has evolved into becoming Ramona’s conscience, her little voice of reason, preventing Ramona from doing stupidly obnoxious things.

Of course, that doesn’t stop Ramona from attempting to parent in the most overbearing way, forcing her daughter to take off her coat while shopping indoors. But as Ramona explains to Avery why she’s fighting with Bethenny, Avery speaks for us all as she expresses her incomprehension of it all. And that incomprehension forces the truth out of Ramona: it wasn’t some innocent query, she was indeed attacking Bethenny.

Avery rightly termed it a “side attack,” a snake-like move intended to push her target to react. But Bethenny refuses to play this game. She may be contractually obligated to film with these women, and she’ll attend the occasional holiday party or charity benefit with the people she happens to hate at the moment. But she has no desire to engage in pointless drama.

And, luckily for Bethenny, she doesn’t have to. Bethenny is witty enough that opening her mouth to comment is enough to make her compelling to watch. Besides, she doesn’t really need this show – she owns a multi-million dollar company, she has books, she has achieved phenomenal success that most of these women could only dream of. The bottom line is this: the show needs her, and Bethenny knows it.

So Avery tells Ramona that it’s up to her to fix it, that Ramona needs to stop being so shady. Ramona, like a petulant child, scrunched up her face into a pouty scowl, affronted that her daughter would take Bethenny’s side. But as Avery continued to berate her mother for her childish behavior, Ramona turned strangely silent. Ramona, a person usually so chatty and obsessed with herself, had turned mute, dumbfounded at the notion that she may actually be wrong. She soon regained use of her tongue and turned defensive, but she knew her daughter was right. And it’s probably why Ramona avoided her at Dorinda’s sad holiday benefit party.

Dorinda’s holiday party was ostensibly a charity event, but it certainly didn’t feel that way. I mean, the cause seemed wonderful – Beauty For Freedom is a charity to fight human trafficking. But the whole thing felt thrown together in the most haphazard way. Dorinda wore a sparkly condom for a dress, the people there seemed like they were lost – wandering about downing shots as they looked for people to talk to, and the stuff available to bid on were, at best, pathetic. Drinks with Luann? I’d rather gouge out my eyes. A weekend at Dorinda’s Berkshire’s abode? To be honest, that would be kind of cool, only if I’d get to witness Bethenny screaming at Luann. But it sounds more like you would be locked away in that haunted house with Dorinda, alone. Which again, I’d sooner gouge out my eyes. Carole did provide some interesting things, but it was pretty “low-rent” –a skincare kit here, a makeup kit there, a bedraggled faux-fur coat.

But, most importantly, Dorinda failed miserably with how she set up the event. Everyone knows that people want booze and will gravitate to wherever it is available. But Dorinda put the tables with items to bid on across the room from the bar. The tables overflowing with goodies were devoid of people, while everyone squeezed toward the bar in search of libations.

A frustrated Dorinda got up on the mike, at first pleading, then threatening to cut off the alcohol supply as she demanded that people go bid so she could raise some money for her charity.

Seeing Dorinda struggle, Carole and Bethenny decide to be charity prostitutes, whoring out themselves as the flirted with people, both men and women, to get people to bid. Which made Carole feel like a used car salesman.

But boy did that tactic get someone to spill the tea. As Carole walked around the bidding tables with a woman named Barbara, a woman who also happened to be Luann’s friend, they moved down to the far end of the table, away from the cameras (but not far enough that they couldn’t be overheard by mike). And they began to discuss Luann’s wedding. Barbara, like every reality television novice, thought she could be honest since the camera wasn’t pointed in her direction. And boy was she honest – she told Carole that she wasn’t excited for the wedding, that she has warned Luann about Tom, that Luann has something to prove.

Luann would rather end up divorced to prove the naysayers wrong that she won’t make it down the aisle. Naysayers like me.

Luann hates being told she can’t. If anything, the derision Luann got for dating Tom – a decision made out of loneliness – pushed her towards wanting to get married. The more the women and, by extension, the viewers, pushed back at the notion of her marrying such a man, the more it made her steadfast in her determination to be with this guy. It did not matter that he cheated or that he was using Luann — she was going to prove the haters wrong, to hell or high .

It’s almost admirable how determined Luann is to get married. However, all signs point to this union as being far from joyful. Every episode that mentions Luann’s relationship with Tom shows that awkward clip of them embracing — her looking overly eager, he looking like a predator who has found his prey (the fame he’s never had).

And it’s obvious that the rumors about him being unfaithful are true. Ramona finally revealed her source of dirt, a woman named Mimi who thought she was dating Tom exclusively until she saw him out with Luann. Like any good collector of dirt, Roman latched onto this woman and became her friend to extract information, until she finally convinced her to go on camera (aka, on record) that Tom cheated on her.

I don’t care that Luann still wants to marry him after all his indiscretions. Based on rumors from her past relationships, specifically with the Count, she seems to have experience with open relationships.

Because Luann’s problem isn’t that she probably has an open relationship, it’s that she’s so dishonest about it. Look, there’s nothing shameful about it, whatever medieval notions she may have about “respectability.” Let’s get real here: if she marries this guy, she’s no longer a Countess. And that means she no longer needs the pretensions, she no longer needs to keep secret that which is not perfect.

But old habits die hard, and the “Great Pretender” (as per Carole) refuses to be vulnerable, refuses to be candid about her unconventional love life. She is so set on presenting herself in the way she wants to be seen by the world, that the world (and by world, I mean me) turns away in disgust and frustration. There’s nothing “real” about Luann, it’s all smoke and mirrors, a gilded cage she’s placed around herself. She is self-absorbed to the point of absurdity, but she’ll never allow that self-absorption turn into real self-introspection. Because to do that would be to tear down the walls she’s placed around herself and make her a likeable human. And Luann doesn’t want to be a likeable human, she just wants to get married and that’s that. 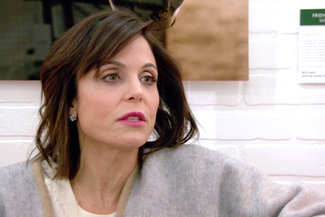