“Russia is nothing but a gas station masquerading as a country,” Sen. John McCain famously said in 2014. Vladimir Putin is not swayed by the insults. By 2019, five years after the birth of that catchy phrase by the Arizona Republican, McCain will hopefully come up with a smarter quip.

Putin’s plan is to turn Russia into the world’s energy superpower—and it’s working. Russia is sitting on so much natural gas that it will take more than half a century to sell it to the world.

Russia has been building many pipelines to deliver its natural gas to every corner of Eurasia. Two weeks ago, Gazprom reported that it began to lay down the first offshore segments of the underwater pipelines that will deliver Russian natural gas across the Black Sea to Turkey.

“Today, we have started the practical stage of the TurkStream project—the subsea laying of the gas pipeline. The project is being implemented strictly according to the plan, and by the end of 2019 our Turkish and European consumers will receive a new and reliable route for the import of the Russian natural gas,” Gazprom CEO Alexei Miller said on May 7, RIA Novosti reported.

Two days before this announcement, Miller promised Putin that Gazprom would start work on the marine part of the pipeline. “The growth of Russian natural gas supplies to the European market continues,” he said to his boss. “Since the beginning of 2017, deliveries to the European market have grown by 15 percent compared to the same period of the last year, or in absolute terms by 8.6 billion cubic meters of natural gas.”

He said that the European appetite for Russian natural gas has been growing despite political frictions. According to Gazprom’s 2016 report, exports to Turkey grew by 29.1 percent, to Italy by 41.5 percent, to Serbia by 41 percent, to Bulgaria by 16.8 percent, to Hungary by 27.4 percent, and to Austria by 69.2 percent.

Currently, one-third of the natural gas consumed by Europe comes from Russia.

TurkStream will have two parallel pipeline threads: one with the natural gas for Turkey and another one for European countries. Each thread will carry 15.75 billion cubic meters of Russian natural gas per year, as stated by the intergovernmental contract. The commissioning of both threads is planned for December 30, 2019. The length of the sea section of the project will be about 920 km, and the land segment is about 200 km.

Germany, despite being a frontrunner in imposing economic sanctions on Russia, gave its definite German das Ja to the building of another pipeline from Russia into Germany. It will be laid on the bottom of the Baltic Sea, disregarding the fierce opposition from Poland, the Baltic states and Ukraine.

Nord Stream-2 pipeline construction will start in 2018 and will be finished by the end of 2019. The two “Nord Stream-2” threads will transfer 27.5 billion cubic meters of gas per year, doubling the capacity of the first Nord Stream, the route of which they will basically follow.

In 2016, the first Nord Stream was full to 80 percent of its capacity. 43.8 billion cubic meters of Russian natural gas were sent from Russia directly into Germany—and this is just the beginning of Vladimir Putin’s ambitious project.

The contract between Gazprom and Chinese CNPC was signed in 2015. The start of the supply is scheduled for 2019-2021.

Power of Siberia-2 project is being discussed with China also—with an additional 30 billion cubic meters of natural gas per year to be delivered to the country.

Then, there is India. The delivery of 2.5 million tons of LNG to India by Gazprom (the equivalent of 3.5 billion cubic meters of natural gas) will start in 2018. The plans of building a pipeline to India as an extension to Power of Siberia-2 or from Iran are also under consideration.

Today, India ranks fourth in the world in energy consumption, but the share of natural gas in the country’s energy balance is still very low—slightly more than 7 percent.

And it does not stop there. Russia and Japan are actively discussing construction of the natural gas supply pipeline from Sakhalin (a Russian island in the Pacific Ocean) to Japan. The 1,500 km underwater pipeline will be able to provide Japan with 20 billion cubic meters of natural gas per year, which is 17 percent of the Japan’s LNG imports.

Is this just business for Putin? Of course not; political interests are intertwined.

First, China, Turkey and Russia are discussing a way to conduct the mutual trades using national currencies only, which will exclude the U.S. dollar from these deals. To kick the U.S. Federal Reserve Service in its teeth is the long-held dream of many of Putin’s economic advisers.

Second, Turkey will become a European energy hub, which will increase the country’s political weight on the continent. Its role will be dependent on Russia’s good will.

Third, Russia’s new motto will be, “If you don’t like us, we have other customers.” Can you imagine the map of Europe with one third blacked-out?

From 2019 into the foreseeable future, Vladimir Putin will decide which citizens of which countries in Europe will have their electricity on, their houses warm in the winter, their coffee pots boiling and their businesses running. Russia will wave off economic sanctions like annoying mosquitoes, and it will punish governments that have the audacity to impose them with painful “asymmetrical” punches.

“Europe must realize that the time when she was a teacher and Russia was a student have been long gone,” Russia’s Foreign Minister Sergei Lavrov said before his meeting with President Donald Trump.

The ambitious plans to ship American LNG to Europe will be put to rest for a long while. Alexei Miller, Gazprom’s CEO, put it this way: “The [Nord Stream-2] pipeline is beneficial as far as the price for LNG is concerned. And it will be so in the future.”

And there is also a cherry on top for Putin: The new pipelines will make the Ukrainian pipelines’ role in the European economy null and void in European politics. The contract between Gazprom and Naftogaz, the Ukrainian company that owns her pipelines, will expire at the end of 2019.

Last year, Gazprom sent about 82 billion cubic meters of natural gas through Ukrainian territory for its European customers, filling the Ukrainian pipeline to 56 percent of its capacity.

Around $2 billion is 10 percent of Ukraine’s hard currency income. In the foreseeable future, Ukraine’s reserves will hardly ever exceed the $15 billion that the country currently has in its reserves, which was stocked in large part due to the loans from international financial organizations. Last year, for the first time in its history, Naftogaz showed a net profit of $984 million due to increase of the transportation of Russian natural gas to Europe, but it needs $10 billion to repair its overused, rusty pipelines—an unimaginable sum for the broke country.

Signs of despair in Kiev are obvious.

Right after the beginning of the work on the sea part of the TurkStream, the representative of Ukrainian Naftogaz “unofficially” stated in the interview to the German DPA news agency that, starting in 2020, it was ready to decrease the 10 percent transportation fee that Russia pays for the flow of natural gas through Ukrainian territory.

Gazprom says that it does not rule out sending its product through Ukrainian territory after 2019 to its customer countries that border Ukraine—but it will be a much smaller amount of “probably” 15 billion cubic meters a year. And, of course, as Miller said, “[only] if it will make sense economically.”

The reality of the 21st century—as Putin sees it—is that energy is a political instrument. Political alliances and the rise and fall of the international importance of particular countries will change in accordance with the energy supply routes.

You can call Russia a gas station masquerading as a country, but from 2019 on, Putin will not care less. By then, Russia will have so much money that Putin will be able to swim in it like Scrooge McDuck. He knows that one can insult one’s local gas company any way one wants. One can curse it, spit on the bill, complain to neighbors and swear to switch to wind power. But at the end of the month, one still has to pay the bills. 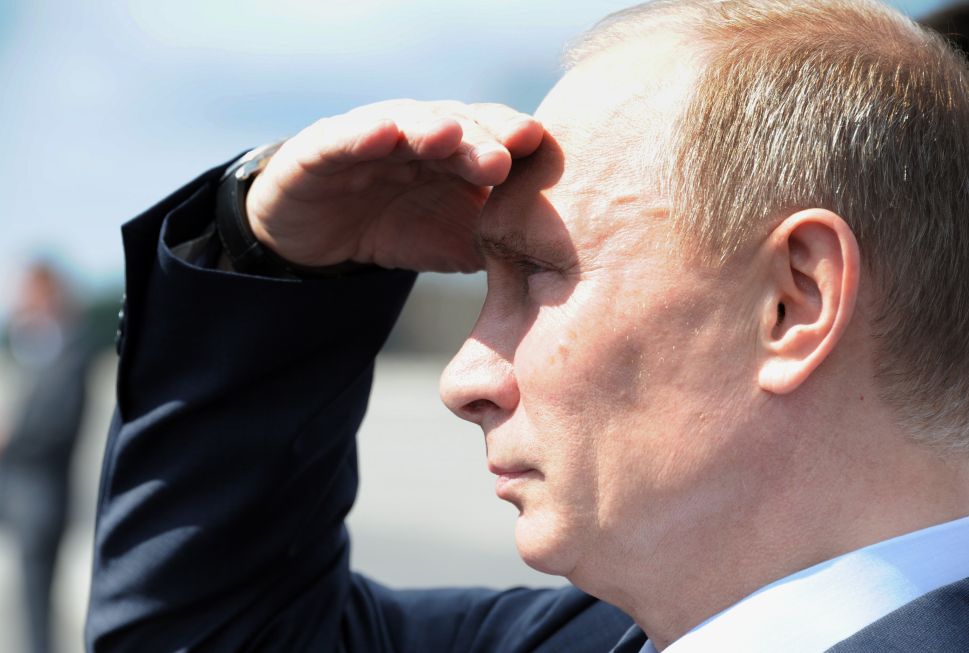