TRENTON — A New Jersey lawmaker revealed the long-awaited details of his plan to legalize marijuana on Monday, rolling out legislation to regulate and tax the drug.

State Sen. Nick Scutari’s bill would create dispensaries and a new regulatory agency. His plan borrows heavily from Colorado, which legalized marijuana through a 2012 ballot measure.

Scutari (D-Union) said New Jersey, however, would impose tougher restrictions than Colorado under his bill.

Recreational users over the age of 21 would be permitted to possess up to 1 ounce of the drug, 16 ounces of marijuana-infused product in solid form, 72 ounces in liquid form, and 7 grams of concentrate. Home-growing would be illegal to prevent an increase in black-market supply, Scutari said, and no one would be able to light up out in the open or in public places.

“The drug laws in this country prohibiting the use and possession of marijuana have failed,” Scutari said at a packed state house news conference Monday. “It is time to end the detrimental effect these archaic laws are having on our residents and our state.”

The bill has no chance of passage during the nine months left in Gov. Chris Christie’s term, but Scutari said he is holding out for a more amenable successor to the Republican governor. All the major Democratic candidates for governor support legalizing marijuana; the Republican candidates favor decriminalizing the drug instead.

Eight states and the District of Columbia have legalized marijuana in recent years. And the most popular route has been for voters to amend their state constitutions. But Scutari said that approach would limit lawmakers’ ability to make adjustments down the line.

“One of the downfalls we saw in other states is that when they pass it by referendum, they have less leeway to make changes to the regulatory process because it’s been constitutionally mandated and subject to constitutional challenge,” he said. Individual cities would be free to pass their own ordinances disallowing dispensaries under his bill.

A pro-marijuana-legalization group, New Jersey United for Marijuana Reform, has estimated that the state could gain $300 million a year from legalizing and taxing the drug, while saving $127 million in expenses incurred by the criminal justice system. Colorado reported $1.3 billion in marijuana sales in 2016, from which it drew $200 million in tax revenue.

“While this is only the beginning of a lengthy process to achieve passage, it represents a historic opportunity for our state,” said Pete Cammarano, founder of the New Jersey Cannabis Industry Association, another group pushing for legalization. “Taxpayers have had to miss out on the sizable benefits of a safe and well-regulated cannabis industry, while being fed misinformation about marijuana. Hopefully, this legislation will afford us an opportunity to finally have the fact-based discussion we so need.”

Marijuana remains a Schedule I controlled-dangerous substance under federal law, the category reserved for the most dangerous drugs. Under President Barack Obama, federal law enforcement agencies mostly stood back while states began to experiment with legalization. But U.S. Attorney General Jeff Sessions has pledged to reverse Obama-era changes at the Department of Justice and crack down on drug use.

Scutari said he expects any opposition from the federal government will be counteracted by public support for legalization, which polls show is at an all-time high.

“We’ve just recently seen polling that is starting to eclipse 70 percent approval rating,” Scutari said. “People are tired of the same thing over and over.”

Black New Jersey residents, he said, face disproportionate penalties despite whites being equally as likely to use the drug, he said. Blacks are 2.8 times more likely to be arrested for possession, he said. Full legalization, Scutari said, would end that disparity and stymie street peddling.

The Linden Democrat said that he is aiming for passage at this time next year. He said he anticipates a long road to wrangling the necessary Senate votes, and that he may agree to dedicate the new tax revenue to specific causes such as women’s health or transportation infrastructure.

“I believe that people have had it with prohibition,” Scutari said. 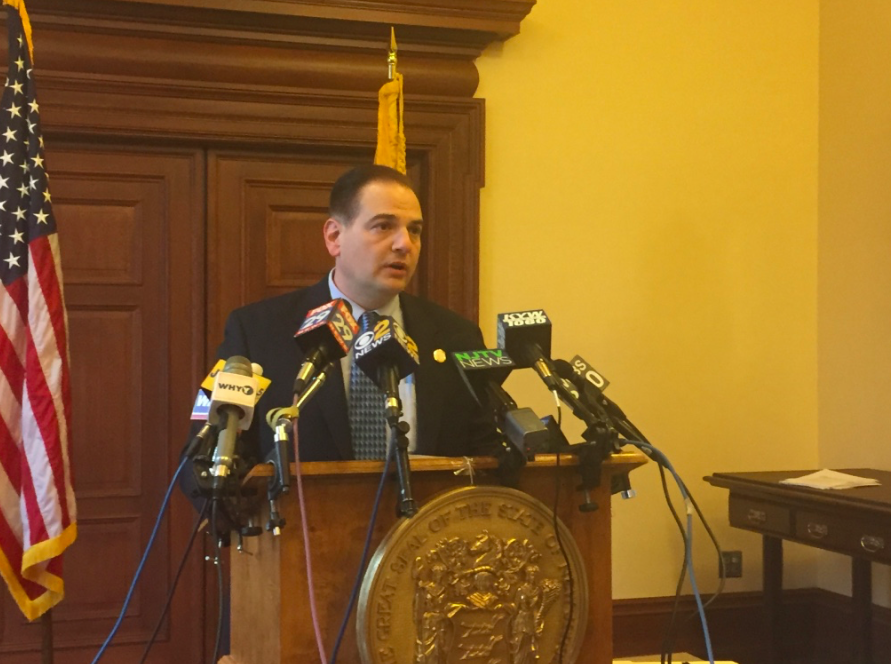