Recently, I was scrolling through my Facebook feed and caught a glimpse of what looked like a photo of a yoga studio I used to teach at in Miami. The angle was from the ground, and I could see what looked like 10 or so “corpse-like” bodies with towels over their faces and toes up in the air.

I realized it was in fact the studio I taught it, and this image was a Facebook Live from someone’s class featuring their students in savasana.

At first, I was upset. Then, I was angered. Then, compassion rolled in. Did those students know they were being filmed? What is the point of having the students in such a video? Regardless, is it okay in our society to film and photo our students in one of the most sacred times in a practice?

On a personal level, as a teacher, I vow to my students never to take any photos without prior consent—like at an event or retreat—but especially never sneakily snapping a pic when they’re fast in unconscious land. Further, I strive to not support, like or follow anyone who exemplifies this kind of behavior. In social media, our voice speaks with our likes, comments and follows, and we can use such actions to silently voice our support or dissent.

However, “It seems like its a normal thing to do nowadays,” says Sarah MacMillan, conscious co-founder of BeGenerationLove. “Social media is the channel that helps us show the world what we do and what we live for.”

I honestly can’t scroll through Instagram or Facebook without seeing at least one or two of these “savasana” photo-ops, and it horrifies me. This had me asking, why is there a trend of teachers taking photos of their students in savasana, one of the most intimate and sacred postures of the practice?

“I’ve never taken pictures during a class because I believe it’s contradictory to teach and hold space to be present in this moment and have a teacher get on her phone during a class and take a picture,” MacMillan adds.

“With the huge role that social media plays in yoga and wellness these days, it’s not uncommon for [these photos] to be a way to promote their class,” explains Ava Pendl, founder of Kicking Asana Yoga. She further adds, “A picture says a thousand words, and a lot of times you can feel the energy of the class just by seeing a photo of it. So, I think that photograph plays into attracting students, which is never a bad thing!”

As a yogi with a business mind and advertising background, I get the marketing rationale. Human nature deems more populated venues (in this case, a yoga class) as better and more desirable. However, business strategies aside, is this act of taking photos in a private space morally aligned with our responsibility as teachers?

According to MacMillan, the role of the yoga teacher is “to hold a safe space for just being, with everything that entails. Students should feel we respect their silence and their ‘me time’ moments or else we are going against everything we want to inspire, which is at the end of the day connection with ourselves… We cannot teach that if we are disconnecting from the class to get on our phones and take pictures of that ‘moment’ our students are having.”

Now, before I gain a slew of haters for speaking on this topic, let’s flip the coin and ask, are there exceptions when taking photos is deemed okay? I think so. I’ve been in events where there are paid photographers present and press involved. Particularly for free events, I almost expect to have my photo taken, because the intention behind a free class is typically to build awareness of the business behind it. Or, take a retreat, where I’ve had retreaters sign waivers knowing they would be photographed and filmed during a class and on excursions. Co-founder and lead trainer of the Boston-based New School of Yogic Arts, Laura Ahrens agrees: “Unless there have been waivers signed or agreements made, to photograph is to step outside the moment of truly being there for and with the students and ourselves.” In truth, savasana is a really hard pose! Done correctly, I’d even go as far to suggest it’s the hardest posture to achieve in all asana, especially in the Western society lifestyle. To sit still and focus on breathing trains the mind to take a break for anywhere from five to 20 minutes. We go, go, go, go all day long and then hit the big pause button to sit, find stillness and breath. If savasana is so sacred and important, what’s it’s purpose, then, anyway?

Ahrens explains, “In an age where the bells and whistles of our devices keep us hooked into a constant stream of information and newness, this is a powerful time to connect with the rhythms of life and let our brains settle from the constant influx.”

MacMillan adds, “[Savasana is a time] to rest, to feel supported, to feel safe, to relax and restore. Not to be worried of having a social media rockstar taking pictures of us in moments like these.”

So, is there a danger or risk in taking photos of students in savasana? Perhaps so.

“Many are taking what the teacher says at face value and, for some, as gospel. It’s important for us as teachers to take this job of holding sacred space very seriously. I’ve known many students who have felt a breach of trust at being photographed in class,” explains Ahrens. “Leaving our cameras out of it respects the privacy of those working through trauma and release. To keep our phones out of class respects the transmission of the teachings and sets the example of putting down devices so we can take up our humanity.”

Bringing up a problem without offering a solution is no better than the problem itself. What can a yogi to do in this case? We still want to go to our yoga classes.

If you’re a student and you’re bothered by your teacher taking photos, talk to your teacher, studio owner or desk management. Sometimes all it takes is awareness to open the light for someone (just like yoga). If it doesn’t bother you, then awesome! There are plenty of teachers who will be willing to snap a pic in your peaceful slumber. As a student, it comes down to personal preference and being honest with yourself and your teacher.

Pendl agrees, “Whether that means not taking photos at all or adding a disclaimer at the beginning of practice so students can choose to opt-out of any photography, teachers must establish trust and compassion with all their students.”

Breaching trust, breaking sacred space, and moving past boundaries are some of the issues I foresee with this behavior. Personally, if I were a student in a class, I would feel a bit violated seeing an image of me in a place I thought was personal and private. This brings me to the last piece: the why.

As teachers and studio owners, it’s important to take a step back and notice the intention behind the behavior. Is it for ego? To show how many people are attending your classes? To show that you got them so sweaty they were dying (no pun-intended) for corpse pose to finally come? Perhaps, it’s to share the peace of the practice and your students are okay with you snapping a picture. As a teacher, know the why. The same goes for adjustments, and the same goes for live streaming. Why?

Do you practice yoga? Are you a teacher or studio owner? I’d love to hear your thoughts on this topic, in either direction.

As a 13-year cancer survivor, Sara fell in love with yoga for its self-healing properties and has been practicing yoga since 2008. Graduating with honors and a BFA in Boston and succeeding as an Art Director and design professional, she left the corporate world in 2013 to commit to educating others about the benefits of wellness and traveling. 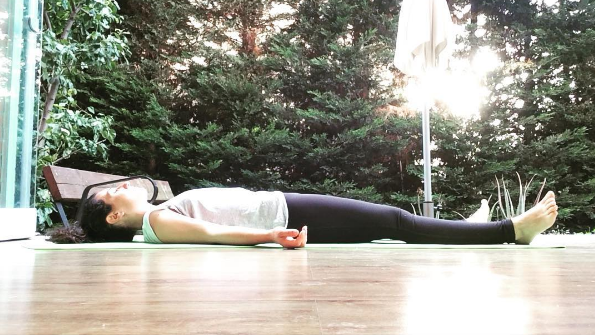