Following her two performances at The Guggenheim yesterday, Solange rejoined the audience barefoot and beaming, descending the rotunda’s spiraling walkway to meet her ecstatic community of fans, friends and family intent on celebrating the triumphant spectacle they had just witnessed.

“Inclusion is not enough, allowance is not enough,” Solange told the crowd. “We belong here—we built this shit…I don’t care about institutions. Museums are tight, but they’re just beautiful spaces.”

Backs were turned to the priceless Van Gogh and Modigliani pieces adorning the walls as Solange inserted her work into The Guggenheim’s space. In partnership with Red Bull Music Academy Festival, Solange debuted “An Ode To,“ a site-specific, interdisciplinary reimagining of songs off last year’s A Seat at the Table, her 2016 masterwork treatise on being a woman of color in today’s world. Offering early-ticket access to her Instagram followers, the two performances not only sold out instantly—they were full of fans who genuinely appreciated the subversive gravity of her performance, dressed in white as she requested.

“Hold your communities tight,” she added, “because that’s why I’m here.”

“An Ode To” made the most of the space, echoing the intentions of The Guggenheim’s original director, abstract artist Hilla Rebay, in her letters to Frank Lloyd Wright, requesting that the museum be constructed as a temple to the spirit. Beginning with the repeated blast of Reshard Baham’s keyboard clarion call, Solange descended the rotunda before joining up with the band on the floor to begin the performance with a new arrangement of Seat’s opener, “Rise.” The performers dressed in white stayed in a line, while Solange and her singers, dressed in brown, went to stand with the band.

The new, live-focused Seat arrangements not only allowed for a fluidity of movement, but a mastery of how sound functioned in the unique space. The outro to “Cranes in the Sky,” for example, broke down into an exchange between hand claps and bass that reverberated throughout the entire building with understated power. Solange’s dance moves further carried across the album’s thematic resonance, too, like when she busted out the “soft shoe” at the end of “Cranes,” an old derivation of a tap dance that came out of Minstrel shows and black vaudeville routines.

A new rendition of “Mad” had her screaming, and then shrieking, the titular word with enough bombast to shake the old masters off the walls, as an added flurry of 13 performers popped up from behind the barriers on the upper floors, punctuating her intensity with blasts of trumpet and saxophone. During “F.U.B.U.” (For us, by us,) she walked among the floor, singling out fans of color among the seated crowd to serenade as she echoed the song’s potent refrain, “Made this song to make it all y’all’s turn/For us, this shit is for us” before singing to a security guard and momentarily twerking on a white bench next to the stage.

“As we sashayed in winding formation, the trumpets echoed for us,” wrote performer Breanna Carthern on her Instagram page. “Our humbled spirits were overwhelmed by the gaze of reverence from the crowd. Every step in appreciation to our culture. We waved our bodies in liberation, as the feeling of validation rippled amongst us all. Black bodies in a white space. Our representation mattered.”

By choosing to perform at festivals and in museums, Solange’s intention to insert her music into these institutional spaces only heightened the power of its themes in the abstract. Debuting elements of the performance as “Scales” at The Menil Collection in her hometown of Houston this past April, for example, inserted Solange’s performance into both the collection and its adjacent Rothko Chapel, demonstrating how black identity, movement and “sacred space art” can work in dialogue with each other.

The Guggenheim’s curator of performance and media, Nat Trotman, echoed Carthern’s sentiments that the performance gained an added resonance for being held in a big white museum, historically founded by white people, adding that Wright’s unique building design amplifies Seats‘ reckoning with the gaze of otherness. As with Meredith Monk’s 1969 watershed performance “Juice,” the first piece to be performed in the rotunda, “An Ode To…” intentionally explored the architectural effects of compression to heighten the music’s thematic resonance.

“If you look at a cross-section of the building, it’s two cones,” Trotman told the Observer. “There’s a cone, the outside of it, that narrows as it goes to the ground. And the inside railing is a cone that narrows as you go to the sky, then at the top you have this huge skylight.”

“What Frank Lloyd Wright was thinking about with this building was, the audience comes in, they’re in this big space, but very quickly go to the top and are in the heavens, in the sky, embracing this geometry in the skylight. And as you go down, the spaces that you’re walking through get narrower and narrower, this compression of space as you go downward. Then, at the same time, you’re always looking across at other people and seeing people that are apart from you. It’s about spectacle, but also being alone, going through this physical space and looking at other people at a distance.”

“What the building does that worked very well with Solange’s piece was, you go through this process, you get to the floor, and it opens up. You’re in the agora. You’re with people. There’s people all around you. For her it really becomes about community and addressing people of color, women of color.”

As “An Ode To” concluded, Solange marched up the rotunda’s circular walkway by herself in a brisk step as the band played her out, the determined and eager look on her face only interrupted by a joyous expression breaking through. 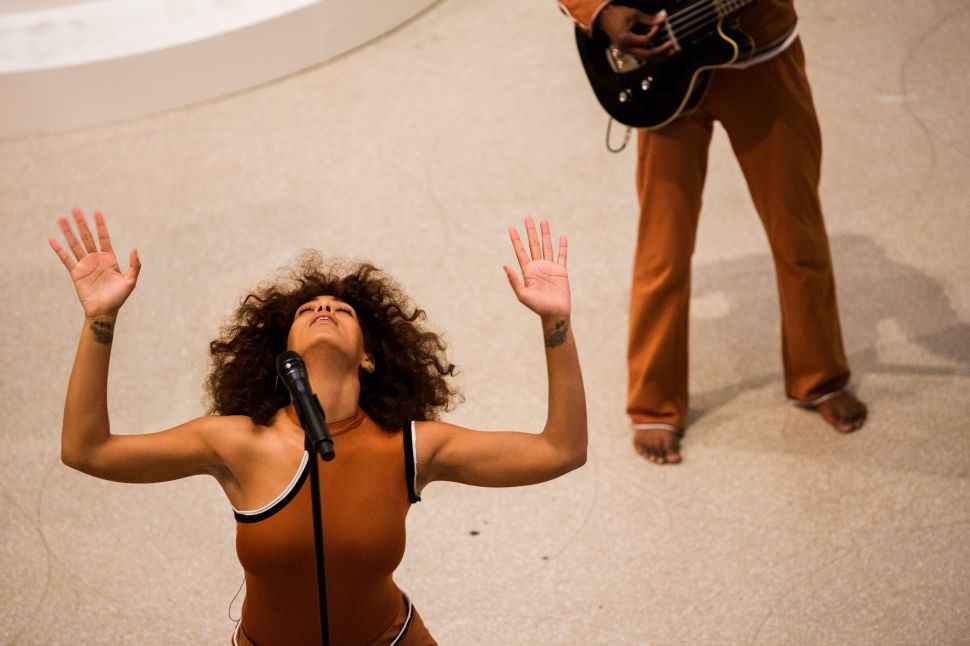