Sometimes the future arrives not with a bang, but with a blank stare.

The modern era of serial television comedy began on April 15, 1994 at 11:15 PM. That’s when the first episode of the first season of Space Ghost Coast To Coast aired on The Cartoon Network.

Space Ghost Coast To Coast, a chat show turned absolutely inside out that made entertainment out of discomfort, contained elements we take for granted in today’s comedy landscape: Uncomfortable gaps; visual and textual repetition, bordering on the avant garde; awkward and non-sequitur filled exchanges between oblivious and frightened hosts and baffled guests; celebrities treated as non-celebrities, and non-celebrities elevated to celebrity; the use of familiar and repurposed childhood images for artistic, arresting, and even sinister means; and acutely Lo-Fi production which created it’s own unique and immediately identifiable visual signature.

These things describe so very much of the future, especially for those of us acclimated to the charged silences and don’t-look-away bad-trip visuals of (much of) Adult Swim’s original programming. It is humor based on fear, insecurity, and a sense of cultural, social, and political destabilization so profound that it’s almost inarticulate in its panic and anger. This soul-crushing awkwardness and stuttering social interaction is also visible in Archer, Baskets, any of Louie C.K’s gasp-inducing shows, and is echoed even in House of Cards and Arrested Development.

Do you realize how freaking different the landscape was when this vision of our shambolic and frightened future was dropped? Space Ghost Coast to Coast hit the airwaves a full half decade before Family Guy debuted; heck, this eminently modern object was introduced into our living rooms even before Friends, with it’s predictable, faux-risqué gags, had gone on the air.

I remember staring at Space Ghost Coast to Coast, almost slack-jawed with awe, when it first came on the air. On one hand, it seemed to be the first series television show that reflected the peculiar rhythms, tics, and paranoia of the stoner experience: it felt like it was doubling back on itself, logically illogical, mega-aware of the minute parts and only vaguely aware of the whole object. It was also great viewing if you spent a lot of time in recording studios, since the hurry-up-and-wait manic inanity and grinding non-purpose of SGC2C was a perfect accompaniment to the rhythms of a working rock band.

You can appreciate the enormous accomplishments of Space Ghost Coast to Coast on four distinct levels: It’s role as the Pilgrim Rock of the Adult Swim leviathan; the fact that it’s the Ramones of Blank Stare comedy; its inventive, radical and much imitated appropriation of existing or archaic visual memes (in this case, the animation cels of a 1960s’ children’s cartoon); or you can enjoy it simply for being a strange, beautiful, almost musical show that remains fascinating and distinct.

TV series comedy, like any art form, moves in fairly articulated and well-documented waves. There’s a lot to discuss and dissect when it comes to these patterns (and it’s terribly interesting thing to do); but for the sake of this article, the only two waves that are pertinent are the Blank Stare Era (of Space Ghost Coast to Coast, Eric Andre, Tim & Eric, etcetera), and the wave that it made instantly old-fashioned:

That was the Snark Era.

Space Ghost Coast to Coast not only replaced Snark, but also actively contradicted it.

In the Snark era, the hosts considered themselves superior to the culture they adjudicated. They were concierges of good taste, they shared detailed and strange obsessions with their viewers, and they boasted of their superiority to the culture of fame they had grown up with.

The Snark Era will forever be associated with its most visible and definitive proponent, David Letterman.[i] Letterman ridiculed pop culture from the perspective of intellectual superiority and the knowledge that he and his college-educated viewers shared certain cultural and generational obsessions. Conan O’Brien improved on Letterman’s snark by reviving the youthful absurdity of young Letterman (those who only knew Letterman late in his career may have seen him as merely nihilistic, but “young” Letterman was joyous in his cynicism), and O’Brien added a cartoon physicality that Letterman lacked. Likewise, Snark + Social Consciousness brought us Snark News, care of The Daily Show, The Colbert Report, etcetera. Also, Seinfeld personified an entire era of Snark sitcoms – urban adventures where smart-asses were consistently done-in by those they thought beneath them (for the sake of space, we won’t delve into a long sidebar about sitcom Snark).

Personally, I’d venture that the Snark era reached its artistic peak with Mystery Science Theatre 3000, one of the funniest and most literate television shows of all time. MST3K, the Pet Sounds of Snark, was literally an entire show built out of pop culture references for over-educated people who could be counted on to “get” a Replacements or Thomas Pynchon reference at the drop of a dime.[ii]

Universally, The Snarks needed to display their absolute superiority to their situation, their guests (if they hosted a chat show), and their place in the gauche world of mainstream television. Snark was the television of Social Comfort and Cultural Superiority.

The Blank Stare era was just the opposite.

Blank Stare hosts and performers were confused by their surroundings, lost at sea, bewildered by responsibility, and they masked their confusion by acting out aggressively, irrationality, or with non-sequiturs. Also, the cultural and media kitsch of the ‘60s, ‘70s, and ‘80s that drove Letterman, Conan, and MST3K were no longer relevant to a generation raised on Nirvana, South Park, and Sponge Bob. An entirely new visual and textual vocabulary was called for, and Space Ghost Coast to Coast delivered it.

This vocabulary for humor would have been literally unimaginable just a few years earlier. It’s funny just to look at Tim & Eric’s long silences and discomfort with the camera, and the viewer now recognizes this as a shorthand for comedy (in much the same way that an earlier generation recognized “just” the raised eyebrow of Letterman or Conan as a shorthand for funny). TV hosts had made guests feel uncomfortable before – this had been David Letterman’s signature for over a decade prior to Space Ghost Coast to Coast’s arrival – but never before had the host himself looked terrified, confused, responding to his own discomfort with aggression; even Barth Gimble (portrayed by Martin Mull) of Norman Lear’s Fernwood Tonight (1977), which is perhaps SGC2C most visible antecedent, was arrogant and suave, no matter how addlepated he was by his surroundings.

Tim Heidecker and Eric Wareheim, John C. Reilly, Eric Andre, and Zach Galifianakis went on to produce television shows with variations on this same point of view: this medium confuses us, we aren’t sure how it works, we are struggling to understand the basic factors; in essence, our discomfort is funny to you.

But Space Ghost Coast to Coast got there first.

Now, Post-Humor (the idea that uncomfortable situations, the performer’s awkward relationship to their chosen medium, and glitches in the anticipated rhythm of entertainment could in and of themselves be profoundly provocative and funny) wasn’t new: Andy Kaufman had made an entire career based on our surprise at his discomfort, and our willingness to recognize how easily we could replace our startle effect with laughter. But Space Ghost Coast to Coast introduced this concept to series television. SGC2C also invented a visual vocabulary to accompany Post-Humor, based on repetition and re-purposed old animation cels (in effect creating a jargon for television that was the equivalent of sampling in music); on one hand, these then-startling techniques gave SGC2C a nearly Terry Riley-esque rhythm, on the other hand it anticipated the glitch art that had yet to be invented, and would be a major factor in Adult Swim’s visual future.

And speaking of Adult Swim’s future, not only did Adult Swim not exist when Space Ghost Coast to Coast debuted, SGC2C was actually the first adult-oriented show the Cartoon Network produced. To give a little more context to how truly radical SGC2C was, during the show’s first season it’s lead in was The Smurfs, and the show that followed it was Magilla Gorilla; if you hung around the network another hour or two, you weren’t rewarded by Dethklok or some hash-oil and porn star laced Tim & Eric offshoot, but by the Jetsons, the Flintstones, and Top Cat. In other words, SGC2C were such a pioneering vision of the future in the wilderness that it’s unfair to compare them to the Sex Pistols; it’s more accurate to say that they were the Velvet Underground of television series comedy. With the possible exception of the 1950’s BBC radio comedy The Goon Show (which literally invented modern British humor, and almost singlehandedly introduced the idea that comedy didn’t need a punch line and could utilize utterly Dada and plot-irrelevant elements), I have a hard time finding any television or radio comedy that was so far out in front of the pack, and so anticipated the future.[iii]

As Space Ghost Coast to Coast showed us nearly a quarter of a century ago, not only will the revolution be televised, it will also contain a lot of awkward gaps and animation cels from the 1960s.

[i] Of course, Snark did not emerge from nowhere, and it had it’s own evolutionary trail. Its most firm antecedent was The National Lampoon (later buffeted and further defined by Spy Magazine, a profound influence on the spread of Snark in the 1980s), and earlier Snarks like Jack Paar, Dick Cavett, and Nichols and May.

[ii] I think it’s important to note that both Saturday Night Live and Monty Python represent totally different genre streams, even if both influenced The Snarks; but this is a different story entirely. Likewise, we note that Snark has had a powerful revival recently, thanks to the political climate. This is greatly evidenced by Steven Colbert’s late night show triumphing in the ratings over Jimmy Fallon’s Tonight Show. Fallon personifies a brand of old-school comedy variety that not only pre-dates Snark, but also is actually a carry-over from the radio age.

[iii] The Goons, relatively little known in the United States, are one of the foundational cultural elements of the 20th Century. In addition to their enormous impact on modern British Comedy (Monty Python is unthinkable without them), they also had a huge impact on the lyrical and spiritual shape of the Beatles (sounds a bit nuts, but John Lennon spoke and wrote about this extensively, and virtually everything the Fabs recorded has, at least, some linguistic trace of The Goons). In a literary, creative, and spiritual sense, the Goons “freed” an entire generation of young Britishers in much the same way that Bob Dylan, Ginsberg, or Pynchon shaped the 1960s’ in America. Let’s write about this sometime, okay? 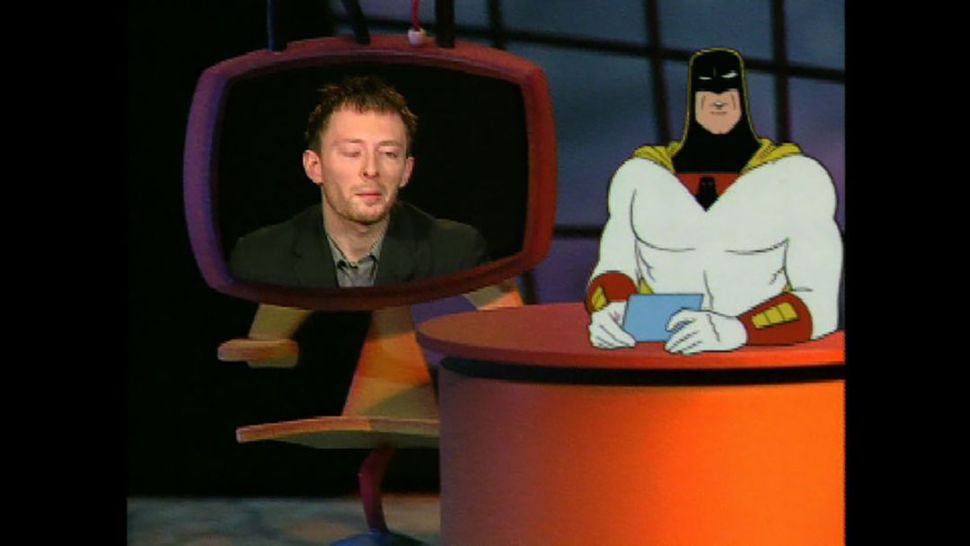