Stefan Zweig, the Viennese Jewish writer (1881-1942) once recognized on a par with Thomas Mann, has seen his literary reputation resuscitated in the past decade with The New Yorker and The New York Review of Books manning the pumps. In contemporary circles, he’s an intellectual’s intellectual, entering the indie-stream when Director Wes Anderson cited Zweig’s books as his inspiration for a favorite movie of mine, The Grand Budapest Hotel. Anderson compellingly told The Telegraph: “The Grand Budapest Hotel has elements that were sort of stolen from both these books. Two characters in our story are vaguely meant to represent Zweig himself — our ‘Author’ character, played by Tom Wilkinson, and the theoretically fictionalized [sic] version of himself, played by Jude Law. But, in fact, M. Gustave, the main character who is played by Ralph Fiennes, is modeled significantly on Zweig as well.”

German actress-turned-director Maria Schrader (Aimee and Jaguar) has positioned Zweig at the center of her melancholy, gorgeous biopic, Stefan Zweig: Farewell to Europe. In a screenplay co-authored with Jan Schomburg, Schrader tightly focuses on Zweig’s final years in exile with his second wife, Lotte (Aenne Schwarz). The title has at the very least a double meaning: referring both to the author’s twilight years in North and South America, and Hitler’s slaughter of the European ideal, an era reflected in Zweig’s The World of Yesterday. When the author committed suicide shortly after his 60th birthday, he put a period on his time as a witness to two world wars and Fascism’s rise.

Playing Zweig, Austrian actor Joseph Hader richly creates an amiable genteel literary aristocrat and dog-lover who radiates empathy and compassion but acts with reticence. His Zweig resembles a wealthy man on an ocean liner who has all the creature comforts he could ever want, and yet no true port of destination – the past cannot be recreated, he considers himself too old for reinvention. This is one accepted version of Zweig, the prolific author of biographies, novellas, poetry, essays, novels and librettos. At a PEN conference in Brazil in 1941 depicted early in the film, he is the literary lion who patiently, and slightly patronizingly, addresses press questions without using his international platform to condemn Hitler vocally. It is understandable if he considered his written words to carry that weight – and that some colleagues did not consider that enough.

In a later sequence set in a New York apartment, Zweig reunites with his first wife Friderike, played by Rainer Werner Fassbender muse Barbara Sukowa, a walking sculpture of an actress, capable of lending weight to the slightest turn of her head. In these scenes, the audience begins to see Zweig refracted through his ex-wife’s experience and, with great subtlety, his selfishness, pettiness and instinct for self-preservation become apparent. As a writer, even this becomes understandable if not entirely sympathetic: as the world crumbles around him, and old rivals petition for his help to escape Europe, while his intimates demand emotional support, Zweig craves the quiet of a desk, an office, so that he can return to that central relationship in his life – that with pen and paper.

Not every contemporary critic has embraced the author’s legacy alongside Wes Anderson and The New Yorker. In 2010, Translator Michael Hoffman wrote in The London Review of Books, “Stefan Zweig just tastes fake. He’s the Pepsi of Austrian writing. He is the one whose books made films – 18 of them, and that’s the books, not the films (which come in at a stupefying 38).”

Schrader’s delicate biopic, set late in Zweig’s life when his libido appears to have diminished, largely overlooks the sexual compulsions that propel much of his fiction, the acts of humiliation on which many of Zweig’s novellas turn. The writer’s darker side — his suicidal obsession that long predated the final barbiturate cocktail with poor Lotte beside him — have been minimized to create a more wholly humanistic figure. But this slender yet dense biopic deserves praise for how it reanimates the author, not what it inevitably leaves out; it’s so difficult to capture and condense the past in all its flickering iridescence as Zweig once did. 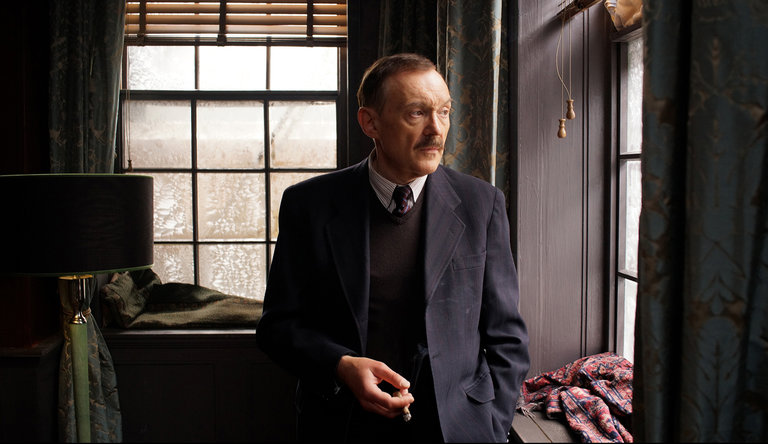