Last week I was in Prague, participating in the STRATCOM 2017 summit—and it was a week very well spent. Sponsored by the European Values think-tank, a top-notch Czech NGO devoted to defending liberal democracies, it brought together 330 experts from 29 countries to discuss the threat to all our societies presented by Russian propaganda and disinformation.

Fittingly hosted in Prague, which as I recently explained has a serious problem with Kremlin espionage and subversion, STRATCOM 2017 is unique in its size and scope, bringing together a diverse group of security practitioners, politicians, think-tankers, journalists, and related experts from across the Western world. In Prague, they meet and speak frankly under Chatham House rules, sharing ideas and best practices. There’s nothing quite like it anywhere else—and certainly nothing remotely comparable in the United States.

That’s because America is several years behind Europe in grappling with the corrosive effects of Kremlin-pushed Fake News on our societies. As the summit made abundantly clear, this is a necessary fight if we want to protect Western democracy and civil society from Vladimir Putin’s disinformation machine and his helpers in our midst. However, it’s painful to admit that Washington really isn’t in this fight at all, more than three years after Putin seized Crimea, invaded Ukraine, and initiated Cold War 2.0. This, notwithstanding that Kremlin lies in recent years have played a noxious role in misshaping American politics and elections.

It’s worth looking at what is going on elsewhere before we castigate our own government. At the national level, several European countries have established units to examine Russian Active Measures, to use the proper Chekist term. In some cases, they are engaged in counter-propaganda, debunking noxious lies emanating from Moscow which aim to dissolve the bonds of democratic societies. Having just witnessed France’s successful effort to defeat Russian spy-games designed to manipulate their presidential election, European eyes have now turned to Germany, which has national elections in September. Whether Berlin will be as adept as Paris at blunting Putin’s lie machine remains an open and very important question.

In some countries, citizens have taken it upon themselves to fight Kremlin trolls and bots online, pointing out their blatant social media falsehoods and deceptions, often with mockery. In the Baltic states, on the frontline of NATO’s efforts to deter Russia in all arenas, from military to information, patriots amusingly calling themselves “elves” have taken the fight to Twitter, Facebook, and VKontake (Russia’s version of Facebook). Self-starting Baltic elves, without government backing, have made a serious dent in Kremlin efforts to destabilize their small countries through disinformation.

Even the European Union has joined the fight against Moscow’s Fake News. The EU established a small analysis unit in the fall of 2015 to combat Kremlin disinformation. Although its tiny size—only a dozen or so personnel—and budget limit its effectiveness, the EU effort at least exists, even if it cannot make much of an impression on the Russians, given that they spend more than $1 billion annually on propaganda aimed at destabilizing the West and its institutions.

That’s still more than America is doing in this crucial struggle to defend democracy. It speaks volumes that the EU, perhaps the world’s slowest-moving, most arteriosclerotic bureaucracy, can create an effort to fight back against Putin’s online disinformation mob. Washington cannot—even years after the Kremlin has made its intentions abundantly clear.

It would be tempting to place this debacle at the feet of President Donald Trump, who can’t seem to criticize anything his Russian counterpart does, even when Putin threatens the West, but that’s hardly the full story. In truth, this rot in Washington, a basic unwillingness to fight Russian Active Measures, traces back to Trump’s predecessor, who allowed the Kremlin to run roughshod over American democracy.

Why Barack Obama remained so timid in his reactions to Russia’s weaponized lies is an important question which historians must answer—not least because Kremlin espionage and propaganda played a role in defeating President Obama’s designated Democratic successor at the polls last November. However, it cannot be fairly disputed that Obama was negligent regarding Russian propaganda, nor that his refusal to take this rising threat seriously contributed to the mess our country’s in right now.

Specifically, in mid-2015, more than a year after Cold War 2.0 commenced, when it was glaringly obvious that Moscow was aggressively employing disinformation to distract, deter, and defame Western democracies, bureaucrats in Washington began to ponder what might be done about this new problem. Which wasn’t actually new—Russian Active Measures today are much like their predecessors from the last Cold War, just with the Internet added—but since there’s practically nobody left in the Federal bureaucracy from that era, it was new to Beltway functionaries.

It was determined that the State Department should establish a small effort, a test-bed, to study Kremlin lies and start pushing back against them. In other words, Washington was going to do what the EU was doing in the autumn of 2015. However, without warning, the White House quashed the tiny State Department counter-propaganda effort before it got off the ground. As I reported in detail at the time, orders came down from the White House “not to upset the Russians,” no matter how outrageously they behaved. By refusing to resist Putin’s Fake News, President Obama got more of it, with fateful consequences in 2016 which we all know.

In the messy aftermath of our last presidential election, Congress finally had enough of Obama’s egregious passivity, and with bipartisan support it placed a mandate to push back against “state propaganda” in the end-of-2016 National Defense Authorization Act. Although the NDAA didn’t use the word Russia, there’s no doubt who was the intended target of this belated effort at counter-propaganda.

Specifically, thanks to a strong push by Sen. John McCain, who has urged Washington to get serious about Russian threats for many years, the NDAA gave the State Department not less than $60 million in 2017 to engage in counter-propaganda work—in other words, debunking Fake News aimed at undermining Western democracies. According to the NDAA, the Pentagon is supposed to transfer the funds to Foggy Bottom, which is perennially short of cash; for the Defense Department, $60 million barely constitutes a rounding error. When Congress passed and President Obama signed the NDAA on December 23 of last year, it became law.

However, five months have passed and nothing has happened in Washington that’s worth mentioning in the fight against Kremlin disinformation. The State Department has established a tiny office inside its Global Engagement Center, which is charged with pushing back against jihadist propaganda; the effort against Russian lies is supposed to be an add-on for the GEC. However, to date nobody has been hired, and the State Department has only a small handful of experts in Russian disinformation on the payroll, nowhere near enough to implement the law.

There’s plenty of blame to go around here, though none of it belongs to the overworked GEC. The Trump White House’s hiring freeze has made it impossible to bring qualified personnel into the State Department. Neither does it help matters that the Trump administration has decided it doesn’t need its own officials to implement its policies. To date, of the 557 jobs that require Senate approval, President Trump has nominated 49, announced the nomination of 19, while only 29 people have been confirmed; 460 jobs have no nominees at all. No previous White House has ever been this slow to get its own people into top positions in Washington.

The impact of this on implementing the NDAA—and countless other laws—is cancerous. Most of the staff work that goes into making the Federal bureaucracy function is approved at the level of assistant secretaries and their deputies. And those critical jobs are almost entirely unfilled at both the State Department and the Pentagon. When closely examined, there’s really no mystery why the will of Congress regarding Russian Fake News isn’t being followed: there’s nobody to make decisions, sign paperwork, transfer funds, and hire staff.

Nevertheless, that doesn’t explain why Congress isn’t asking questions. Several of its senior members have been passionate about getting our government in the fight against Putin’s noxious lie machine. While it’s no surprise that Team Trump isn’t excited about pushing back against Russian propaganda, why patriots on Capitol Hill don’t have pointed questions about the law not being followed is something of mystery. Until senators and representatives start asking what’s going on here, the struggle against Kremlin Active Measures will be fought by our European allies on our behalf. 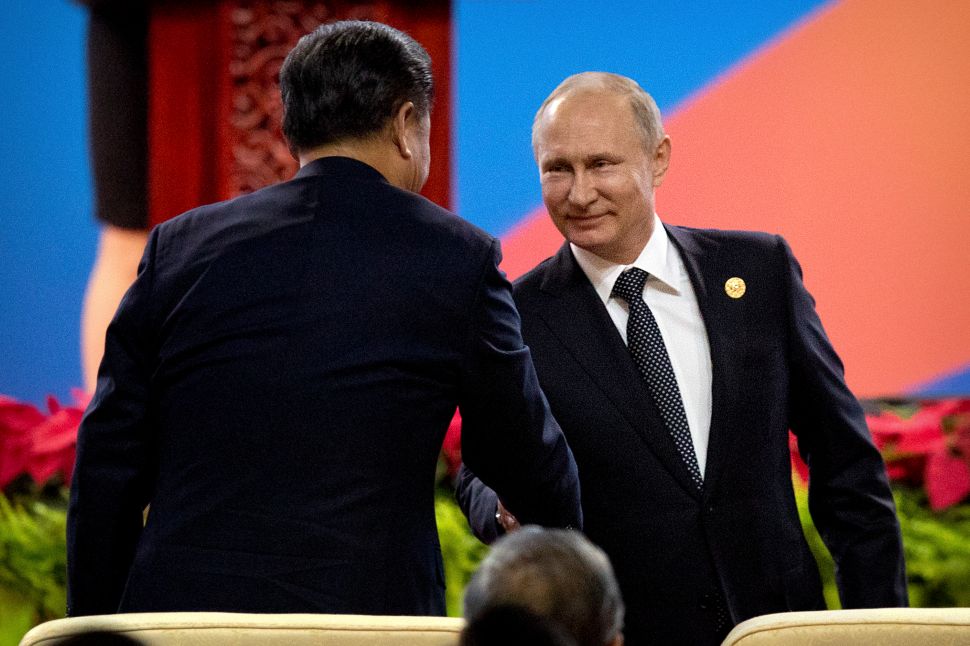