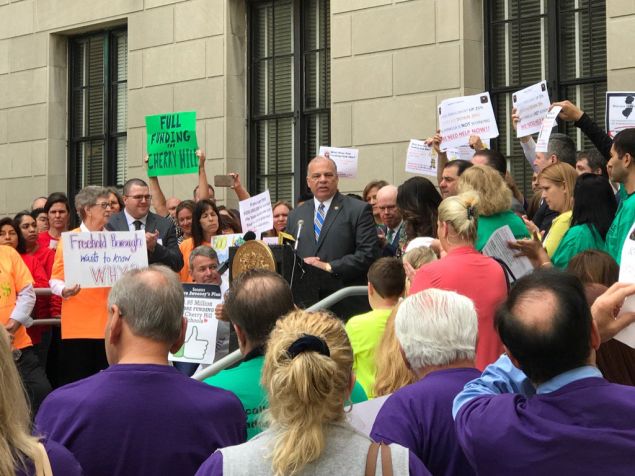 Senate President Steve Sweeney drew a line in the sand over school funding on Tuesday, saying his house would only pass a budget that shifts state dollars to underfunded urban and suburban districts this year.

Gov. Chris Christie has drafted a $35.5 billion spending plan for fiscal 2018 — $13.8 billion of which would go to schools — and lawmakers are reviewing his plan before the July 1 deadline to enact the budget.

Christie has kept funding mostly flat for schools during his tenure, and senators from both parties say it has caused problems for districts where enrollment rates have spiked since the Republican governor took office in 2010. To provide them some relief, a bipartisan group of senators says the state should scrap enrollment caps and a section of the School Funding Reform Act of 2008 known as the “hold-harmless provision.”

Under that section, school districts facing a loss of state aid due to enrollment or demographic changes are spared of any funding changes for one year. But critics say that nearly two dozen districts have continued to receive adjustment aid after their first-year grace period and that the hold-harmless provision has to go.

“As part of the budget, we will begin the process of funding the formula,” state Sen. Paul Sarlo (D-Bergen), chairman of the Senate Budget and Appropriations Committee, said before a hearing on school funding began Tuesday.

Sweeney, he said, “has bipartisan support on that from the Senate Democrats and Republicans” and is planning to remove the hold-harmless provision and enrollment caps through budget language this year. Those provisions were added to the SFRA in 2009 as a way to secure needed legislative votes, Sarlo said, but they have now outlived their usefulness.

State Sen. Jennifer Beck (R-Monmouth) said recently that because of quirks in the SFRA, 27 school districts receive state aid above what the law requires. Meanwhile, more than 100 districts with surging enrollments are underfunded, according to the same law, she said.

Mark Magyar, a spokesman for the Senate Democrats, said that the disparity among districts is even wider. Under Christie’s proposed budget, he said, 190 districts are overfunded and 406 districts are getting less than they are entitled to under the SFRA. Sweeney’s proposal to scrap enrollment caps and adjustment aid under the hold harmless provision would redistribute state aid among all of these districts, with a five-year phase-in.

“We needed to put a couple provisions in to gather enough votes, the hold harmless provision, enrollment caps, and others,” Sarlo said. “And we’ve been talking about it, that that needed to go away. That was a temporary measure. Well here we are, 2017, eight years later, it never went away. But during that same period you had some cities some communities experience extraordinary enrollment growth, you had the 2 percent cap that went into effect, and funding for years was flat funding by the Christie administration.

“So school districts, on a shoestring, were getting by. The day of reckoning has come.”

Sweeney and Assembly Speaker Vincent Prieto (D) launched parallel efforts this year to explore changes to the SFRA. The hold-harmless provision has been a boon to Jersey City, which is not in Prieto’s district but is in his home base of Hudson County.

“I understand that makes it a little bit more complex, and I’m very, very respectful of that,” Sarlo said.

Prieto in a statement Tuesday said he has been open to some of the changes sought by the Senate. But the debate should also focus on Christie, he said, because the governor has shorted the funding formula for schools under the SFRA for years, saying state taxpayers can’t afford the full bill.

“I’ve made clear that we need to tweak the school funding formula to fix adjustment aid and enrollment growth, while also improving special education and preschool access, and that I want to negotiate the new state budget without punishing school districts, playing politics or hurting low-income children,” Prieto said. “That was and remains my goal.”

The school funding debate has dominated budget hearings this year, with parents and educators from across the state packing the budget hearings and testifying in droves, one after another. The scene played itself out again Tuesday at the state Senate hearing and at a news conference with Sweeney beforehand. 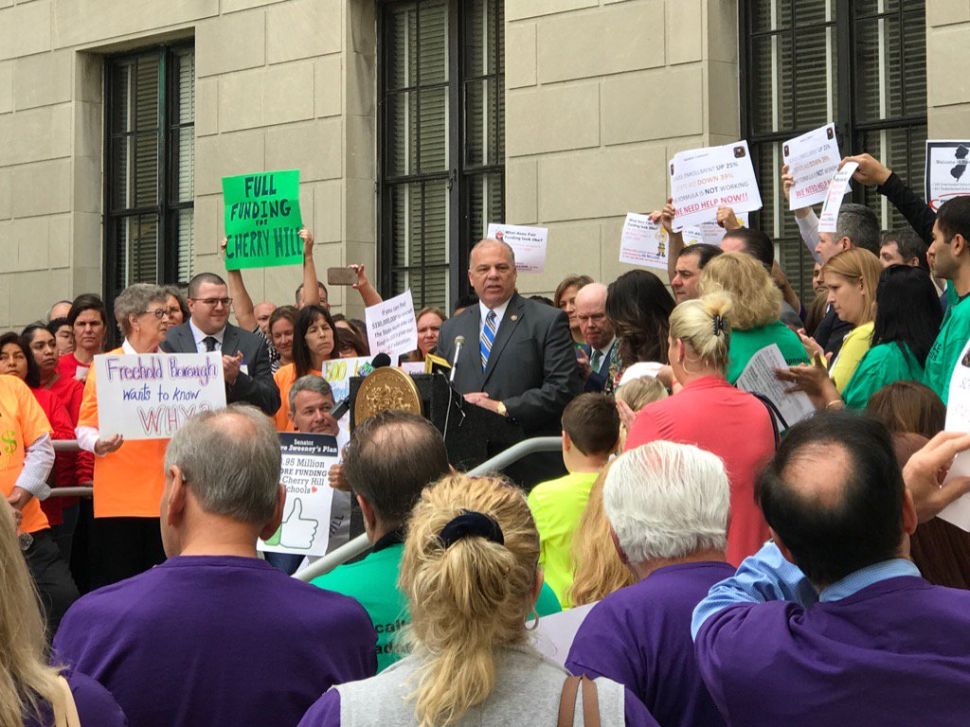