I marvel about a great deal of The Americans at this point. Have you noticed, for example, the sudden silence when the show cuts to black for a commercial break? There’s almost always a room tone, an electric hum, a breeze, a chorus of crickets—something that’s a constant and barely perceptible presence in the background of your mind, until it’s switched off. As a sonic signature of espionage paranoia, that’s tough to top.

I marvel at the performances of Noah Emmerich and Brandon J. Dirden as Stan Beeman and Dennis Aderholt, the most mild-mannered spooks in the history of the genre. They make Gary Oldman in Tinker Tailor Soldier Spy look like Jack Nicholson in The Shining. Their calm voices and gentle reassurances and beatific smiles as they talk their lovely single-mother Soviet asset through her latest debriefing is so similar to the approach they adopt when walking Henry Jennings through a school assignment at the FBI that you wonder if these guys ever switch off this mode of handling people. From what Stan says to Henry, they basically don’t: “I don’t trust you,” he says when explaining why working for the Bureau isn’t all it’s cracked up to be. “I’m not allowed to.” Smile, and smile, and be…if not a villain, then at least not a junior high student’s idea of a hero. Heroism, like the mail robot the show spent several seasons fixated on before sweeping to the side, is “more trouble than it’s worth.”

I marvel at Costa Ronin as Oleg Burov—along with Dirden, one of the most undervalued actors on television today. I can’t get enough of how this guy shrugs and slopes his way into every scene, every interaction, as if apologizing for his relatively secure station in the Soviet system with his body itself. The thing is, he conveys Oleg’s intelligence, too; this is not a character who’s going to fall into the pretty obvious, or at least seemingly obvious, traps of unorthodoxy and dissent being laid by his comrades in the KGB. If they’re going to take him down, he’s too innately strong and decent to make it easy on them.

I marvel, as always, at Matthew Rhys as Philip Jennings. Has any actor on a major drama in the past 17 years been asked to be so flatly miserable for so long? Has any actor been able to pull it off this well, whether he’s eating McDonald’s with a fake son while remembering playing airplane with a father he’s recently learned was Stalinist executioner, or holding a gun to the head of a kindly old couple for an execution of his own? “I can’t just get this order from them and do whatever they say,” he tells Elizabeth, before getting this order from them and doing whatever they say. He’s thinking of his dad, and Gabriel, and every other person he knows who showed him great kindness while they weren’t busy murdering people. In them, he sees himself.

I marvel at Irina Dubova, the actor who plays the ill-fated “Natalie Granholm,” whose sad fate occupies the final reel of the episode and whose hometown, “Dyatkovo” gives it its name. The weight placed on this guest player’s shoulders, to bear the brunt of the hatred and horror and violence that has been brewing for episode after episode all season long. The need to lie convincingly, and then lie unconvincingly, and then tell the truth unconvincingly, and then tell the truth so convincingly it tears your goddamn guts out. “Natalie” was once someone else entirely—a teenage girl whose family was murdered by the Einsatzgruppen, the roving killing squads responsible for conducting the Nazi Holocaust on the move throughout Eastern Europe and the Soviet Union. She was gang-pressed into working for them afterwards, you see. And worse than accepting her punishment from Elizabeth and Philip, tasked by the Centre with executing her for the crime, is the idea of this happening in front of her American husband. “Please don’t hurt him,” she says. “Please, he doesn’t know,” she says. “He thinks…I’m wonderful,” she says. Christ.

“There was no reason,” she says of her survival among the Nazis, when her husband has returned home and finds himself at the mercy of the Jennings alongside her “Nothing made any sense. They give me food. I was obedient, helpless.” Quite suddenly and quite unexpectedly, I found myself crying over this woman, along with this woman, a minor character we’ve never seen before tonight and, as was becoming increasingly apparent, would never see again. “The first time,” she continued, “they gave me so much to drink I could barely stand up.” Thinking that I knew where this was headed, I started crying harder. “The first time…?” one of the Jennings asks—at this point my notes begin breaking down too—and Natalie-not-Natalie replies “…that they shot them,” and my understanding of the horror reverses course yes, but it deepens as well, as does my sobbing. That the Nazis assaulted her, violated her person, seems drearily likely. But they forced her into complicity with their violation of others, too—countless others, vast unmarked graves full of others. This is what she decides to tell her husband and her killers about in her last minutes on earth—what she did, or was forced to do, to others, not what others did to her.

For this, Elizabeth makes her suffer. When Philip fails to pull the trigger, Elizabeth steps in, making a point of killing Natalie’s husband first, giving her enough time for the grief and revulsion to strike her before killing her too.

What infuriates her so much about this woman? Not the image of the cold-blooded Nazi collaborator Claudia and the Centre have painted, certainly; Elizabeth may be many things, but she’s not stupid, and she is a student of human behavior. When she acts in an obstinate or obtuse way, she’s reacting to something internal, not external, because external factors don’t fool her and never have. Perhaps what she sees is a woman who responded to the same trauma of rape Elizabeth herself experienced by serving the enemy, not the motherland, even though if anything the opposite should have been true, since it was the motherland who raped Elizabeth. Perhaps she sees another woman who’s spent decades in the company of a man she loves but still cannot shake the stench of death and corruption that the struggle of power and ideology smeared all over her—another woman who killed for an idea, and should not be allowed to go gentle into that good night as a result. Perhaps she’s just a jingoistic hothead sociopath. Perhaps it’s some combination of the three.. Perhaps the resultant puddles of blood from bullets to the brain of two unarmed senior citizens render the question moot.

That’s Elizabeth’s verdict, as best I can tell. As the two of them drive from the scene of the crime, Philip’s face as blank an empty page, Elizabeth says “I wanna get out of here. We should just go. I mean it. Let’s go home.” No more fucking and lying and killing—just a hasty retreat to a comfortable place far away from the front lines, where she and her family can live in peace. Sounds like someone we know. Excuse me—someone we knew. 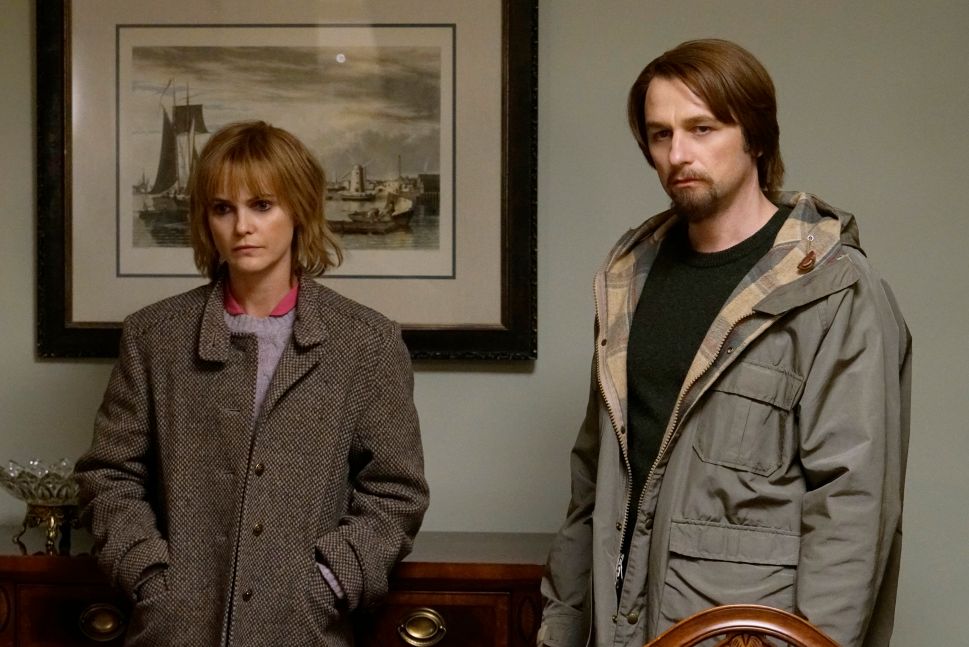