Have you seen that picture of Nicole Kidman walking out into the sun after leaving her attorney’s office and finalizing her divorce from Tom Cruise? Her arms are wide open and her face is towards the sky like she’s been a woman held underground for years and this is the first time she’s smelled fresh air in a decade.

Nicole Kidman in 2001 leaving her attorney after her divorce settlement with Tom Cruise / me today because Mercury retrograde ends pic.twitter.com/RZumPQhcf6

That picture is basically her career right now.

Coming off her brilliantly successful HBO series Big Little Lies, Kidman’s upcoming films span genre from sci-fi (How to Talk to Girls at Parties, from a Neil Gaiman short story) to horror (The Killing of a Sacred Deer) to superhero (Aquaman) to prestige comedy (Untouchable, from Paul Feig). But first up on the roster is a new movie from Sofia Coppola, maker of stylized and unabashedly female films. The Beguiled is an adaptation of a 1966 novel that was also made into a film in 1971 starring Clint Eastwood. It follows the events at an all-girls boarding school in rural Mississippi when a student finds an injured Union soldier, played by Colin Farrell, near death. The women rescue him and he sparks sexual jealousies and romantic rivalries in the formerly repressed environment, particularly among three women: the school’s headmistress (Nicole Kidman), a teacher (Kirsten Dunst), and a teenage student (Elle Fanning).

Today, Focus Features released a truly stunning film poster: we get the the film’s three stars, all blonde and still as porcelain dolls, hovering at the foot of a bed, and just the hint of the enemy soldier beneath them, his beard barely visible. The sepia tones and sideways text promise The Beguiled will be just as stylized as any good Sofia Coppola film (am I the only one who unironically loved Marie Antoinette?) and the look on Kirsten Dunst’s face says, Oh yeah, this is gonna get fucked up.

May this be the year of vengeful bitches everywhere. The Beguiled is in select theaters June 23. 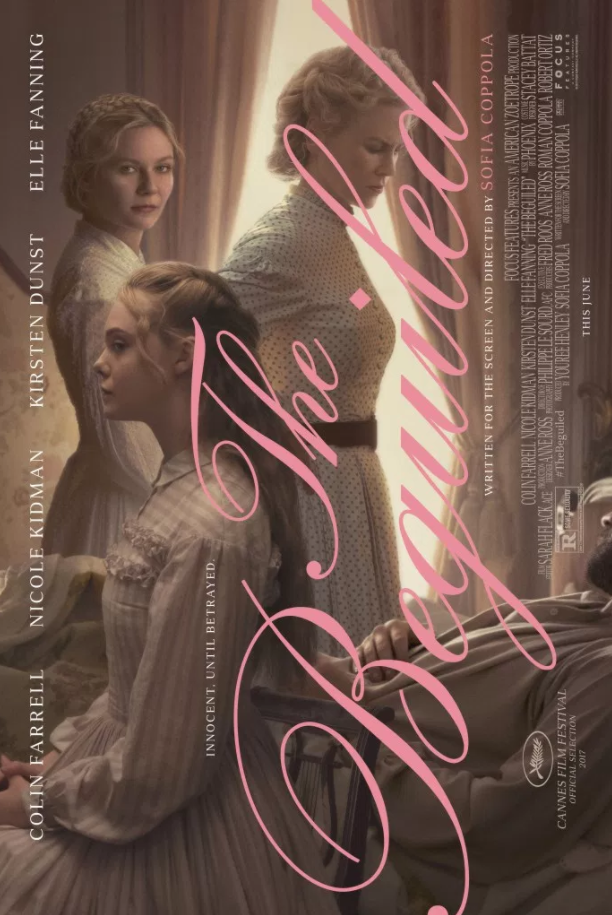