Even though Handmaid’s Tale has taken a play out of the Netflix book and gave us episodes one through three in a block, I figure it’s probably better to break up the recaps a little bit. Even if you’re like me and you just can’t stop watching, the Handmaid world is a horrifying nightmare (only slightly more horrific than the current state of the union) and it’s nice between episodes to take a breath, take a sip of coffee, and stare out the window for a few moments.

Episode two begins during the Ceremony (why do all dystopias have the most inert, generic names for the most horrifying things?). Offred is trying to bring herself elsewhere, using the blue on the ceiling to bring back memories of her old life. From the look on Serena Joy’s face, she is impatient for the whole thing to end. Somehow, Joseph Fiennes’s pose—hands on his hips—adds something brilliant and chilling to the whole thing: it’s a posture traditionally of complete confidence and yet so awkward as he’s thrusting in and out of a woman. It’s a power stance with all of the power taken out of it.

After their trip to the market, Offred and Ofglen take a brief detour to sit by the wall, nonchalantly chatting about the weather while hanged bodies rot behind them (a brief look at one of the body’s symbols indicates he was Jewish). We find out that Ofglen was a former lecturer in cellular biology, only spared the fate of most academics because she had working ovaries, and that the regime, religious as it might be, is a separate entity from organized Christianity: the church in town has been torn down, and sunlight now filters through its skeleton like it once did through stained glass.

And then Offred gets her first moment of hope: there is a resistance. “You can join us,” Ofglen says. There is an us. There are people fighting, which means this world, this system, isn’t a forgone conclusion. Ofglen is the only outlet, the only method of communication to that hidden underground, but at least Offred knows it’s there now.

But there is one break in the norm that’s considered a good thing: a visit from the birthmobile, sirens blaring, to pick up Offred and the other handmaids to bring them to the home where Ofwarren (pregnant, one-eyed, bitchy) is ready to give birth.

The home is a Gileadian Versailles: columns and art and towers of pastries so pretty that they would make Sophia Coppella want to retroactively fire her Marie Antoinette set dresser. While the wives, all in green, stimulate the birth with the—well, let’s say adoptive mother to be while a harp plays, the handmaids go upstairs to comfort Ofwarren during her real, not-playacted labor.

“Sugar us bad for them,” one of the wives says when another offers Offred a cookie downstairs. They talk about handmaids like they’re dogs or children. Mrs. Waterford assents to Offred taking the cookie. It’s a tiny moment, but it plays out over the course of a full minute, the tension stretched out like a soap opera. “Aw isn’t she well behaved,” one of the wives coos, and then, as soon as Offred leaves the room, the wives’ true feelings become obvious: “ “Little whores, all of them,” one of them murmurs. Offred’s only revenge, her only act of autonomy is being able to spit the bite she took into the sink before she goes upstairs with the rest of the handmaids to chant for Ofwarren.

A voiceover tells us the chances for a healthy baby are 1 in 5 “if you can get pregnant at all,” and we get a flashback to the birth of Offred’s daughter, Hannah, back in a time before all of this, even though the clues are there to indicate something was about to be very wrong. First, she and her husband force their way into a hospital surrounded by desperately praying people. Clearly the birth rate is already so far down people have turned to religion. And then, after her baby’s healthy birth, we get the deathly quiet of the near empty room that contains the hospital bassinets: Hannah was the only healthy baby born. Finally, a horror movie moment: Offred (or rather, June, but let’s stick with Offred for sake of clarity throughout the duration of these recaps) wakes up to find her baby gone. The hospital is empty but for a nurse facedown in blood and a few running figures and a PA system announcing that something is wrong. And then we see her: a desperate, frantic woman curled inward to cradle the baby she’s holding, cooing, talking about how her baby is still alive. “She’s not your baby,” Offred whispers. Her husband runs down the hall and soon the police descend to give Hannah back to her parents while the deranged woman is handcuffed.

Back in the present, a more dignified form of baby stealing is happening: when the baby is almost ready to come out, the wife straddles Ofwarren like she would during the ceremony, and pantomines giving birth, with all of the requisite grunting and screaming. And when the baby comes out, healthy and crying (you can hear the relief in the room), the girl is given to the wife, already spread out in bed, to hold and to name. Ofwarren is already relegated to wet nurse.

That night, Offred’s trip to the Commander’s room begins with its own horror movie introduction: “I’d like to play a game with you,” he says. Fortunately for Offred, that game is just Scrabble. For whatever reason, Commander Waterford wants to break down the restrictive barrier between them and permit Offred to be a human being for an hour. We can’t see all of her tiles, but it’s no accident that it looks like she has most of the letters for the word “domination.” Even when they’re playing a game meant to be a diversion among friends, the Commander holds all of the power. But he does say he’s taking a trip to D.C. and Offred thinks that information might be valuable enough to share with Ofglen. She lets the Commander win. Manipulation and reclamation of power wherever she can get it.

The soundtrack of Handmaid’s Tale has caused a bit of division among viewers, some of whom find the use of upbeat or modern music takes them out of the world. But I love it. I love the way “Don’t You Forget About Me,” makes Offred’s slow motion walk down to the gate look like a rom-com victory lap—it’s a beautiful day, the Commander didn’t want to chop off one of her limbs, she has information to share with Ofglen who can give her access to a resistance—and then the music stops. Ofglen is gone. Or rather, Ofglen is right there, but it’s a different Oflgen. And we have no way of ever knowing what happened to the first one. Fuck. The moment plays equally devastating and funny, but that’s why I love the show’s use of humor and music: if you don’t have a gallows humor you don’t have anything. 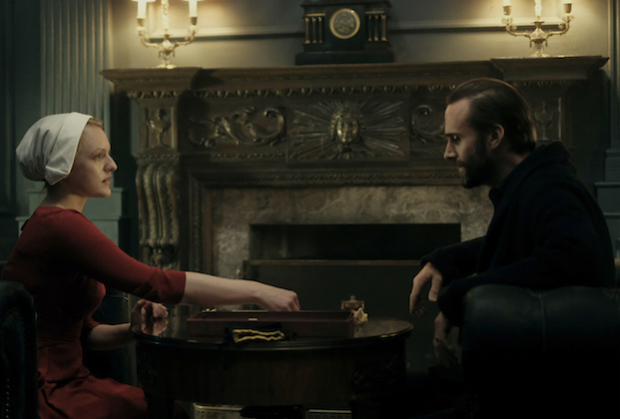