I remember way back before season one kicked off, reading some preliminary reviews of The Leftovers that all kind of agreed that the first few episodes of the series were decent but that it got really good with the episode that focused on Reverend Matt Jamison, played by Christopher Eccleston. The episode lived up to the hype, and in fact I’ll posit that the Jamison-centric episodes have been the highlights of each season (although there’s still a few more this year and a series finale, so who knows).

Maybe Matt speaks to everything that’s great about this show, as well as why it never became a big hit. He’s weird. He’s annoying. He’s sanctimonious, he’s arrogant, and he’s condescending. He’s very likely a madman. He’s also probably the most altruistic and compassionate character in the series. Eccleston came to The Leftovers fresh from being the last guy to play Doctor Who before playing Dr. Who was cool, and he’s played Matt Jamison with such gawky intensity, desperation, and raw realism that he’s managed to subvert the Difficult Men trope that largely defines out current GOLDEN ERA OF TELEVISION by presenting the icky, not-quite-as-cool-as-Don Draper reality of a complicated dude struggling with the clash between id and ego and everything else.

And maybe Matt’s not actually all that compassionate and altruistic. This episode kind of calls his motivations into question. Which is actually perfect for a show about lingering questions, and an episode about a character who rejects the notion that there’s anything he can’t control.

The episode does indeed begin with Matt beating the system. The explosive event alluded to last week turns out to have been a nuclear explosion on an uninhabited island in the South Pacific, the end result of a French submariner’s naked rampage. The explosion has Kevin trapped in Australia ahead of the imminent Sudden Departure anniversary, and Matt has kind of a lot riding on the theory that some heavy shit centered around Kevin is going to go down that day, so he figures out that the only flights allowed into Australia are foreign aide, finds a foreign aide cargo plane he can commandeer, and offers that dude who played David Aceveda on The Shield twenty grand to fly him, John, and Michael Murphy over.

So far, so good, except John’s current (and Kevin’s former) wife, Laurie, decides to tag along, worried for Kevin’s mental health after his call to her last week.  Matt and Laurie’s conflicting ideologies and obvious distaste for one another is fun to watch, the fact that they’re both blind to how similar they are, each clinging to some organizing principal (faith, science) to make sense of the world, is interesting; but the first twenty or so minutes of the episode are just fun and interesting. Which, I know, ‘just’ fun and interesting, what the fuck am I expecting? Some ice-around-the-heart-shattering, mind blowing shit?

Well, yes. But that’s only because that’s what the show usually delivers.

I thought the first twenty minutes or so were too on the nose. Faith versus science. Fun, interesting, so what? And then their flight got redirected to Tazmania, and things got about one hundred times more on the nose than I could have imagined as Matt Jamison found himself struggling with the nature of his faith in an actual lions’ den, and I loved it so, so much.

Matt walking around the ferry boat as revelers dressed in outlandish garb frantically hump has some nice visual parallels to the Jamison-centric episode last season, which saw him trapped in the freaky camp outside Miracle, trying desperately to get home. A couple big differences—the folks in the freaky camp outside Miracle were desperate for salvation, and these randy lion enthusiasts are purely committed to carnality, that episode in season two saw Matt surrender his own desires in order to relieve the suffering of others, and this time there’s no way Matt is willing to give in. This time, he’s sees his mission as being both bigger than himself and the culmination of all his trials and travails…the horrible deaths of his parents, his own near-fatal childhood illness, (back, by the way, and killing him quick, judging by the gouts of blood that keeping erupting from his nose) his wife’s long vegetative state, his being accused of molesting her while she was unconscious, her abandoning him once she woke up…it’s all been tests and preparation for whatever is supposed to happen next. He’s in control. He’s the star of the show, and none of the shit that’s gone wrong in his life has been through any fault of his own.

Hm. An episode that seems kind of ‘one the nose’ that features several images of blood shooting out of a nose. Does that mean something? Does everything?

I guess that’s the big question Matt faces after seeing the dude who played Detective Box on The Night Of shove another dude overboard. I should look up his name. Bill Camp. He’s awesome. The character’s name is David Burton, an athlete/sportscaster turned messiah (shades of David Icke, the real world former athlete/sportscaster and self-described ‘Son of the Godhead’ who’s got a lot to say about reptilian aliens secretly running the planet) whose claim to fame is having realized he’s God after dying in a mountain climbing accident and shrugging it off.

Matt has a lot riding on Kevin being representative of the divine after coming back from the dead, but he isn’t that into this guy. He’s already made up his mind about the miracle in Miracle, and this new God doesn’t fit the narrative Matt’s built, the one where he has a starring role.

Interesting parallel to Kevin Senior insisting that his son is a supporting character in the story of how he’s the one destined to save humanity, and not he other way around, after reading Matt’s book a few weeks ago. Also pretty fun for the characters in an ensemble show to constantly be worried about whether they’re the lead.

No one believes Matt when he says he saw Burton throw a man overboard, so Matt takes action into his own hands, attacking the guy, restraining him, and demanding that he admit what he did.

I couldn’t possibly recap the conversation that follows in a way that does it justice. You’ve seen it. Go watch it again. It’s funny, it’s sad, it’s subtle, it’s not subtle at all. It’s probably what Matt’s entire life has been leading to. Wait for the moment when Matt stops talking about God with David and starts talking to David as God. Wait for the moment when David tells Matt what everyone has been trying to tell him for three seasons, that he’s only been a good man because he thinks God is paying attention to him, and watch Matt actually hear him, and understand.

Is Matt Jamison a good man? Does compassion count when you’re only being compassionate because you expect some reward? Isn’t that every nihilistic middle school punk’s criticism of their religious step-mother? Isn’t it more complicated than that? Maybe the problem is with thinking of when compassion ‘counts.’ I don’t know. For the record, I think Matt probably is, at his core, a good person. Seeing himself as a key player in a cosmic chain of events that will lead to the salvation of mankind is certainly selfish, but at his core, under all his sanctimonious, arrogant condescension, he really is out to help people, and if martyrdom exists on a sliding scale with ‘savior’ at one end and ‘annoying’ on the other, skewing towards the ‘annoying’ end is still on the scale and a least somewhat noble.

There’s lots of good stuff here that I’m skipping over. John Murphy finding out that Laurie didn’t tell him Kevin claims to have seen Evie and (seemingly) letting it go, the debate over whether John losing his wrathfulness is a good thing or not, the part where the lion enthusiasts try to strap some kind of suction device over Matt’s dingaling…what maybe matters most in the entire episode is how it ends. The boat arrives in Australia, the captain tells Matt he believes David Burton actually did toss a guy overboard, a runaway lion attacks and presumably kills Burton, and Matt turns around to face his friends and announces, with more beatitude than fifteen Alan Ginsburg’s crammed in a sack could hope to muster, “That’s the guy I was telling you about.”

I have no idea whether this is supposed to signify that Matt feels as though he’s been proven correct about everything or if he’s had his faith shaken completely. But even though I don’t know entirely what to make of this ending, I still thought it felt like a kind of culmination for the character. I feel like the character ended up where he was supposed to end up. And there are three more episodes to go, so who knows what will happen, but keeping in mind that the show is drawing to a close, the fact that they came up with an ending to this episode that’s so ambiguous and so satisfying makes me super optimistic about where all of this is ultimately headed. 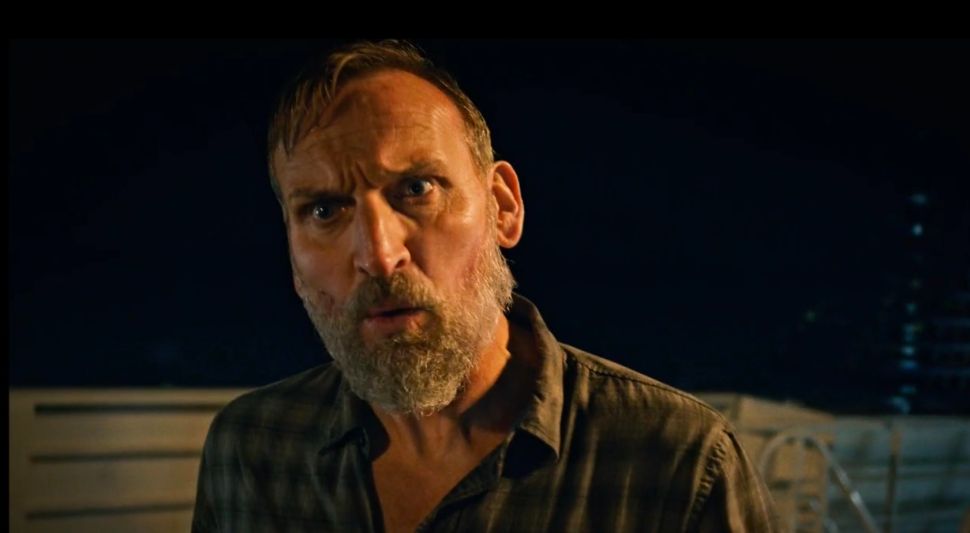