Imagine Damon Lindelof, the man behind both The Leftovers and Lost, at breakfast. He’s in a diner. He’s alone, for some reason, working his way through some granola and yogurt, sipping coffee. Maybe it was a late night or something, because he doesn’t have much of an appetite. When the waitress comes by to see if he needs a refill or anything he asks her to take his plate away and bring the check. Says he’s all done. The waitress looks at his plate, at how he’s only eaten maybe a quarter of his meal, and says, “You’re finished? Are you sure?”

I bet this question gives Lindelof a cold chill. Is he finished? Is he sure? Could he take one more bite? Did he do his best? Maybe she knows something he doesn’t. Maybe…maybe…maybe…and then he’s thinking back to 80,000 pissy tweets tweeted by grumbling dickheads seconds after the final episode of Lost aired, and then he’s thinking about the plan for ending The Leftovers, and then he can’t catch his breath, and then he’s panicking, staggering out of the diner, he’s in the parking lot, he’s fumbling with thekeys to his car…

And that waitress is still standing there beside his table wondering what the fuck is going on, hoping he doesn’t have food poisoning, hoping if he does that he gets himself far enough away from the diner before dropping dead that no one will be able to place where he sucked down the bacteria that did him in, because she needs this job. She’s saving up to buy her boyfriend, Rufus, a sex swing as a get-out-of-prison present.

I know what you’re wondering. Why is Rufus in jail? Here’s the thing. It doesn’t fucking matter. Damon’s panic matters, the waitresses desire to give Rufus a treat matters. That’s it. That’s what you’re supposed to be worried about.

I haven’t written before about how the specter of Lost haunts The Leftovers in general or this final season specifically, because it’s kind of boring to me. If you want to read about that stuff, check out any of the other 875 recaps and reviews of this show that talk about nothing else. While you’re at it, listen to one of the 500 podcast interviews Lindelof has given about how those grumbling dickheads rattled him post-Lost and how all that led to all this and played into following a show with a bunch of mysteries at its core with a show about living in a world full of mysteries that have no answer and how that drives people bananas.

For the record, I liked the Lost finale. I think I remember Lindelof, in one of those 500 podcasts, saying that the idea was to provide an ending that put a premium on character’s and their arcs over explanations. I found that satisfying, and by the way, any other ending would have been terrible because mysteries are only fun before they’re solved.  Speculating is fun. Wondering is fun. Solutions are almost always dumb. People lose site of this because they see the time they sink into entertainment as an investment, and I suppose in a way it is if you’re spending some hard earned cash for cable or a streaming service but really the only possible return you’ll ever get on that investment is being a little closer to death when you’re done binging or whatever, so you’d better enjoy the ride for what it is. I remember having a ferocious argument about this with my cousin Rufus after Lost ended, and getting so annoyed with him that I framed him by making it look like he’d been using carrier pigeons to smuggle molly across state lines and had him sent to jail.

Wait—that’s why Rufus was in prison? Rufus is my cousin? That seems like it must have some significance…but does it? Hard to say. One of they key themes of this entire season of The Leftovers seems to be that you can read as much or as little into anything that happens as you want. What’s up with David Burton? What’s up with that mysterious radiation and the departure machine? What’s up with Gary Busey? What’s up with those lion people humping on a boat? Who knows?

You might have a dream that talking pickles have your father chained to a wall in a shotgun shack out in the woods and that they’re forcing him to teach them to play chess, what significance does that have? Here’s a Jorge Luis Borges quote for you, “In our dreams (writes Coleridge) images represent the sensations we think they cause; we do not feel horror because we are threatened by a sphinx; we dream of a sphinx in order to explain the horror we feel.”

I don’t know what that means when it comes to those pickles out in the woods, but that quote seems handy for parsing what’s actually important in this episode of The Leftovers I’m supposed to be recapping, because I think the significant thing here is that it’s largely a dream Kevin Garvey is having, or something like a dream. This is a story about Kevin coming to terms (or trying to) with the conflict within himself, and there are tons of details that seem to indicate some deeper meaning as tothe larger nature of the universe, but those all add up to a problem we don’t actually have enough information to solve. I’m sure someone somewhere on the internet will put together some kind of unified theory as to why David Burton (the God guy from the lion boat who also appeared to Kevin in the afterlife last season) appears here and why Kevin had to put his dick in a scanner to enter the bunker and how Liv Tyler’s haircut is actually a reference to French surrealist sculptor Pierre Doo-Kayshooes and I’ll look forward to reading that and probably getting all bent out of shape about something in it I either disagree with or wish I’d come up with, but that the adventure Kevin has cooked up for himself here is ridiculous, and he knows it’s ridiculous, just as his mission to learn a song that his father thinks can save the world is ridiculous, is what matters. That Kevin names Patti when he’s asked to identify his Secretary of Defense (and that Patti later kind of confirms that his naming her conjured her up, which seems to confirm that he’s sculpting this adventure as it unfolds) is what matters. That the ending hinges on Kevin realizing he should have stuck with Nora and that he abandoned her out of fear is what matters.

It seems as thought Lindelof (and his collaborators) are sticking with wrapping up a show by focusing on characters over explanations, although who knows what might happen next week. Maybe that episode opens with Lindelof himself suffering a panic attack behind the wheel of his car and running down my cousin Rufus, home early from prison and walking to the diner where his wife works to surprise her, and then we follow Rufus  into afterlife where God shows him a long PowerPoint presentation explaining every little thing that ever happened over the run of the series.

Actually, that would be pretty cool. 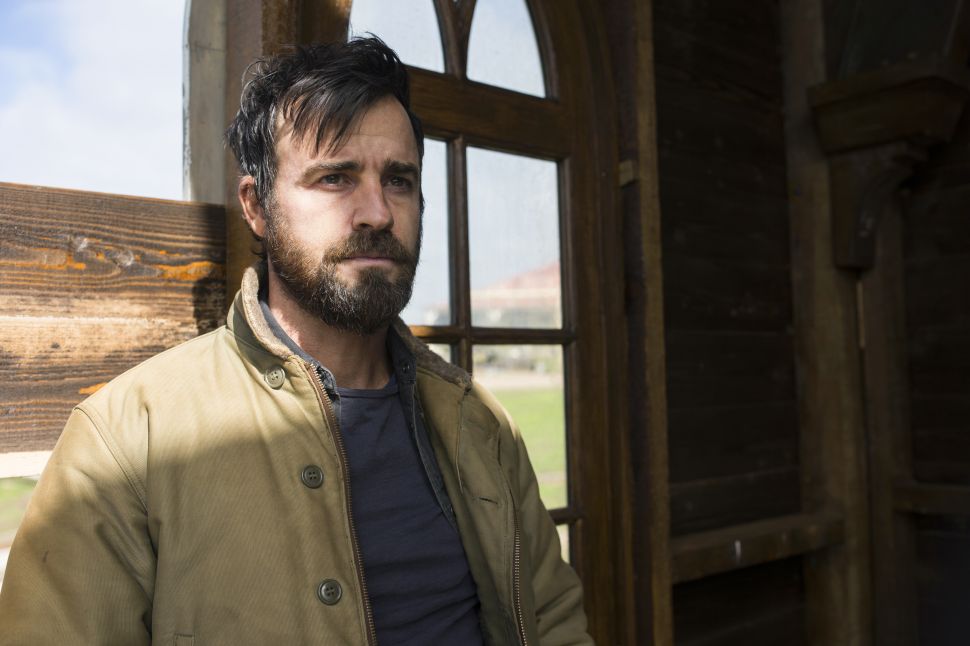