I don’t think there’s an actress alive who’s better at playing the struggle between conscious self and unconscious desire, or self-deception, than Carrie Coon (see also: Fargo). Somehow she can arrange all the features of her face to project one emotion but betray whatever that emotion might be with her eyes, with her voice…it helps that she’s working with some excellently crafted scripts, of course, but she’s a wonder to behold on screen. Who else could make Justin Theroux, a man who appears to be composed entirely of jagged angles, look so lost and vulnerable?

Not to say Justin isn’t a great actor in his own right, because he is. But he’s never better than when he’s in a scene with Coon. And they get a couple of straight doozies together this week.

When we last saw Nora and Kevin, they were talking about how happy they are with one another, despite the fact that Nora just walked in on him asphyxiating himself with a plastic bag and then decided to travel to Australia in search of what may well be a suicide machine. This week opens with the pair checking in at the airport en route to Australia, responding to a TSA agent’s inquiry of whether they are together with a pause and a searching look from Kevin that lasts a little too long. If that’s not enough of a hint that this relationship is in trouble, two minutes later Nora lets Kevin in on the secret that she’s smuggling twenty thousand dollars into Australia because it’s illegal to travel abroad with more than 10 grand, and when Kevin asks her why she didn’t just give him half the money to carry she responds by fucking him in the airport family restroom.

I’ll submit that 60% of couples that have fucked in airport restrooms have done so to avoid a difficult conversation, and that 75 percent of that fucking has taken place much closer to the end of a relationship than the beginning. I don’t have any proof to back that up but I feel like I’m right and I defy anyone to prove me wrong, preferably by taking me into an airport restroom and making love to me before launching into a real heart-to-heart conversation.

Come on, I dare you.

Speaking of hunches, I made a prediction last week that was proven correct this week—the question about killing a baby in order to cure cancer mentioned by the suicidal man Kevin’s dad met in the outback was in fact part of the screening process for those interested in using the Sudden Departure machine Nora is ostensibly in Australia to investigate. And this is getting back to the wonder of Carrie Coon, too…because from scene to scene, moment to moment, it’s not clear whether Nora is actually planning to bust these people, as she claims, or if she’ll dive head first into oblivion as soon as possible. The episode would have worked if we got the sense Nora was lying to Kevin about her motivations, the episode would have worked if the arc was Nora changing her mind about what she’s in town for, what we get instead is American Treasure Carrie Coon playing each scene as though Nora is never actually saying what she’s thinking while trying really hard to believe what she’s saying, as someone trying as hard as she can to fool herself into thinking she knows what she’s doing. The episode ends up being not really about Nora deciding what to do, it’s about Nora realizing what she wants. And maybe the key to that is when the doctor running the examination pops the question (two infant twins, one will grow up to cure cancer but only if the other one dies, you don’t have to kill the baby but you have to nod to give consent for it to die, what do you do?) and Nora says what’s one more dead kid when curing cancer is at stake, sure, let’s do it.

Please note: the dude Kevin’s dad met reported that he answered no to this question. Nora says yes. They’re both rejected. Here’s another hunch, I don’t think there’s a right answer. I think Nora got rejected because she’s lying, because she’s telling them what she thinks they want to hear, what she thinks a ‘good person’ might say.

Whatever. Nora’s true intentions for the whole supposed sting operation seem to become pretty clear after she freaks out when she’s rejected. I don’t think that’s how someone who’s only out to make a bust reacts in that situation.

Kevin’s storyline this week isn’t quite as interesting, being ultimately a little more concerned with getting people from point A to point B so that they can get to points C and D over the next few episodes. Plus it really kind of boils down to being a slight retread of the whole making-Kevin-question-his-sanity-but-then-show-that-some-mysterious-force-is-actually-at-work-at-the-last-second-thing that she show handled way more interestingly in the season two. The most interesting thing part of his whole adventure is maybe Laurie’s assertion that he conjured up an image of Evie because he understands what she did, running away from her family, that he wants to escape from his own life, that he called her (Laurie) because he knew she’d help him shake the delusion.

I buy her rationale for why Kevin called her of all people, and she makes a good point when she mentions how irresponsible Kevin—the chief of Police in Miracle—was to run off to Australia a week away from the Sudden Departure anniversary. But I don’t know if I agree that Kevin craves escape. Two weeks ago he asked Nora if she wanted to have a baby. Maybe he didn’t mean it, maybe he was flailing in that moment, but if he was, he was flailing for connection. And he takes Matt’s book along to Australia, which makes me think Kevin isn’t thinking about running away as much as he’s in search of some meaning, and desperate for that meaning to come through a feeling of connection to his friends and family.

Or maybe the deal is that he’s been hoping his connection to friends and family might give his life meaning, and it’s not working, and that’s the problem.

Whatever his deal is, the episode ends with an epic, heartbreaking showdown between him and Nora where accusations fly and old wounds thought healed are shown to have been merely festering. Kevin doesn’t storm out so much as he kind of wobbles away, right into the arms of his papa and Grace, and the episode ends with the third version of ‘Take On Me’ we heard this week playing as Nora sits alone in her hotel room, the fire sprinklers drenching her.

I don’t know what to make of the three versions of ‘Take On Me’ that play in this episode. I’ll admit that I assumed A-Ha was an Australian band until I looked them up on Wikipedia. I was watching the video for the song on my laptop just now and a very tall man with red-ringed eyes came up behind me (I’m in a coffee shop) and looked at my laptop screen and said, “I used to masturbate to this video in high school but I stopped because my brother was listening to this song when he killed himself.” I said I was sorry to hear that, he asked me if I wanted to buy his watch.

I should have bought that guy’s watch. If this were The Leftovers he and I would have been destined to meet, and buying that watch would have propelled me on a journey of self-discovery. I see the guy smoking a cigarette on the edge of the parking lot. Maybe I’ll go talk to him. The very end of this week’s episode hinted at some kind of calamity, an explosion that has everyone panicked and all flights in and out of Australia called off. We’ll talk about what the deal is with that next week, unless my destiny leads me to a rag soaked in chloroform and a stained mattress in this dude’s basement, and at this time next week I’m being slowly, methodically, peeled. 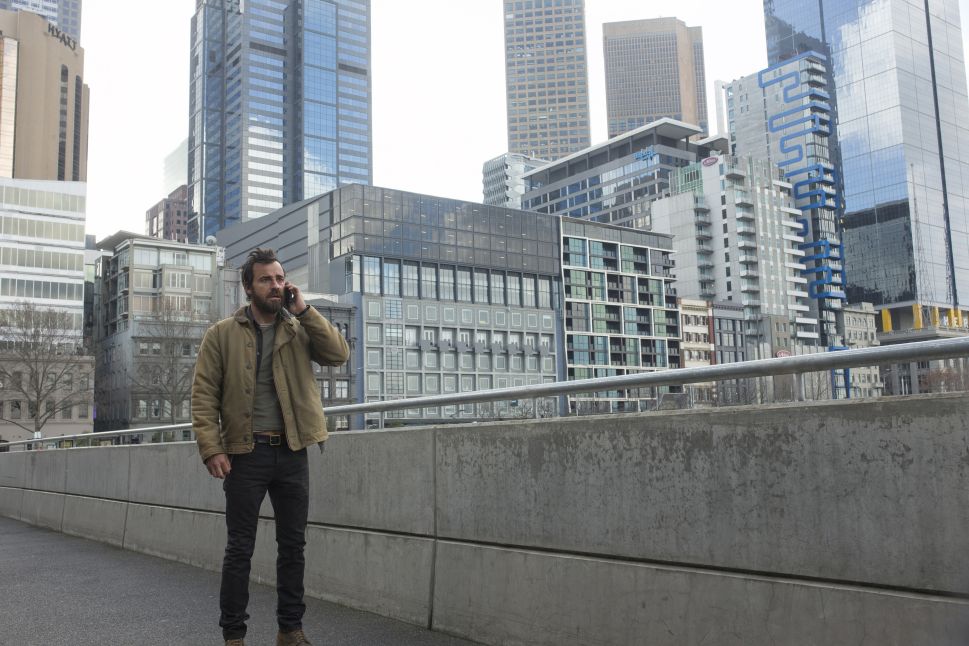