Donald Trump tweets a lot of strange things, but he just took his Twitter oddities to a whole new level.

Tuesday night, the tweeter-in-chief shared a post that, as per usual, bashed the media. Or it least it looks like it was suppossed to—the tweet abruptly ended with a nonsensical word, “covfefe.”

The now-deleted tweet sparked so many questions. What is “covfefe”? What was Trump trying to communicate? We have 10 theories

It was reported earlier that day that Trump has been “gaining weight” and “emotionally withdrawing” as the Russia probe swamps the White House—to which many people responded with a “same.” With this news about Trump’s well-being coming to light, it wouldn’t be surprising to learn he had a few too many that night. We’re guessing he overdid it on piña coladas at the Mar-a-Lago Club. He definitely seems like a piña colada-type guy.

Donald Trump was so tired from taking rights and any feeling of security away from women, racial minorities, Muslims, the LGBTQ community and other marginalized groups that he was half asleep when he signed on for his daily “fake news media” tweet.

An alternate sleep theory: since he eats like a child, it’s also possible he got super hyped up on Mountain Dew and penned this post mid-sugar crash.

3. Sean Spicer knocked the phone out of his hand while jumping into the bushes

Press Secretary Sean Spicer has been known to literally hide in the White House bushes to avoid questions about Trump’s terrible decisions. (Here are some hilarious memes about that). He was likely preemptively jumping for the bushes again to hide from the scientific community and other reasonable people who would be pissed about Trump’s exit from the Paris Climate Agreement, which was reported today. Trump was typing at the time, and Spicer accidentally hit Trump’s phone while mid-air and caused the half-typed erroneous tweet to send.

4. He was practicing for when climate change destroys the planet

Now that Trump has reportedly decided to go back on the country’s commitment to stop climate change, things are about to get pretty polluted. Trump was likely practicing tweeting with his eyes closed—something we’ll all have to do soon thanks to all the future smog.

5. Melania is trying to send us an SOS

When a video of Melania slapping Trump’s hand away surfaced recently, she thought this was her chance. Eyes were on her apparent hatred for her husband, so she attempted to send an SOS tweet from his account. The two wrestled over the phone and this nonsensical tweet was sent in the scuffle.

6. It’s a distraction from the Russian probe

Trump knows the world will be all over any and every misstep—the more mundane the better, actually. Gift us “covfefe” and we’ll write about that for a little.

7. It’s the code for the nukes (hopefully not)

This theory is courtesy of @RogueNASA—the Twitter account set up by anonymous NASA officials after the Trump administration placed restrictions on several federal agencies regarding communication with the public. This is certainly one of the more bleak theories, but it’s equally possible. If Trump were to launch a nuke, he would for sure think he is supposed to do so by tweeting the code.

We are desperately hoping #covfefe is not a code to launch the nukes. If it is, it’s been fun. Later.

8. It all goes back to the orb

It was just last week that Trump touched the mysterious glowing orb in Saudi Arbaia. (Here are some hilarious memes about that). Did it give him some sort of power? Was he trying to communicate with the orb again? Or perhaps a dark spirit possessed him through the orb and has now surfaced on Twitter to communicate.

Shortly after deleting the tweet, Trump tweeted the following:

Who can figure out the true meaning of "covfefe" ??? Enjoy!

It is 100 percent possible that Trump thought “covfefe” was a real word. 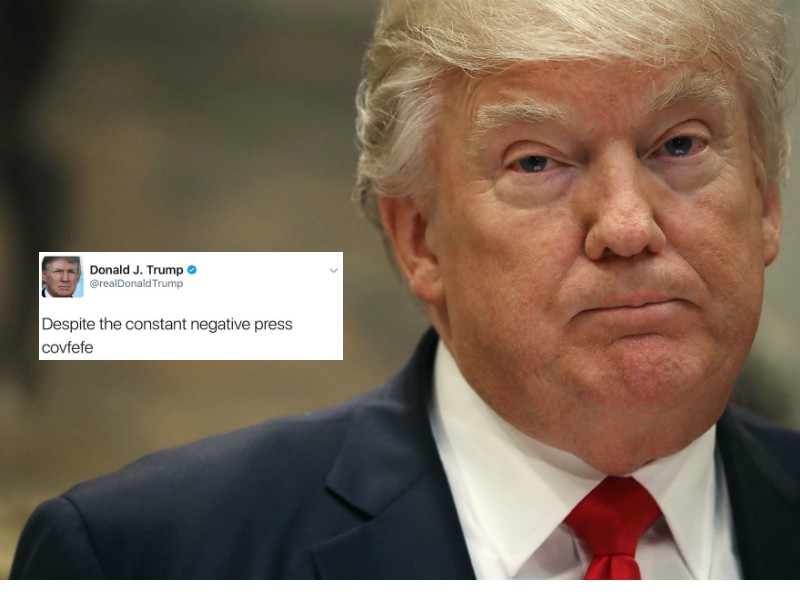