I’m going to wait a moment while everyone who has seen David Lynch’s groundbreakingly bonkers, early 90s horror-mystery( s0rta?) sh0w takes a collective gasp at the blasphemy of this headline.

See, there are all sorts of different ways to watch Twin Peaks, starting with the conventional wisdom of scripted TV:

There are a few obvious reasons for doing this: Twin Peaks’ return mark Lynch’s return to full creative control. Showtime-backed off, allowing Lynch to create something, well, Lynchian. ““It’s the pure heroin version of David Lynch,” said network CEO David Nevins. I’m hoping that means we won’t be subjected to that watered down P-plot piffle of  Lucy’s love triangle with Deputy Andy and Dick Tremayn and that subsequent adoption drama. Fire Walk With Me, which came out in August 1992 to reviews so bad that the Metacritic score for the film is a whopping 28.…out of 100.

But there is a small yet vocal contingent of FWWM loyalists (myself included) that believe the movie’s “failure” was due to reasons other than the quality of the film. We can point to the high expectations of the audience, who wanted to see the resolve of Agent Cooper’s experience in the Black Lodge, but instead found themselves frustrated by the lack of answers. Or you can blame the prequel format, which told fans what they already knew from watching the show. Or the lack of cast members that showed up to reprise their roles from Twin Peaks. Donna Hayword, Laura’s best friend and confidant was necessary for the story in Fire Walk With Me, but Laura Flynn Boyle refused the part; in true doppleganger style, they replaced her with Moira Kelly. (You know her as single mom Karen Roe One Tree Hill.) Way before the finale of Lost, Twin Peaks suffered from a backlash of infuriated fans, who ended up feeling disrespected by Lynch when he provided no revelations in FWWM. I imagine it was the ultimate bait-and-switch con: rather than answers, fans showed up to watch something that could have stood on its own as one hell of a disturbing after-school special, titled something to the tune Dirty Fingernails Spells Trouble At Home.

People will tell you not to start with Fire Walk With Me because as a movie about the lead-up to the show’s central murder, it reveals Laura Palmer’s “killer” before you’ve watched a single episode. Which would be a valid point…except that anyone tuning into Twin Peaks for the first time this late in the game most likely do not give a shit about the spoiler of Fire Walk With Me.. If anything, you’ll be working with context from the film that will only heighten the creepier moments of the show.

Unfortunately, this does not work in reverse: once you’ve seen Twin Peaks, you’ll never be able to watch Fire Walk With Me with fresh eyes, the way you could with, say, Muholland Drive (in the alternate reality where ABC greenlit that series, it was never a movie, and Justin Theroux is inexplicably MORE famous than in this world.)  Expectations, explanations…. for a Lynch fan, we understand these to be bummer distractions. Lynch, like Damon Lindelof, like Nic Pizzolatto, like Brit Marling and Zal Batmangli, simply isn’t interested in providing audiences with conclusive answers. They’re interested in mysteries; in the world-building of the weird. Looking to them for any sort of logic makes the whole experience topple down on you like a House of Cards, a show which maybe you should be watching instead of Twin Peaks if you need your narratives spoonifed.

My love affair with David Lynch might have begun at Mulholland, but it became an obsession after Fire Walk With Me. Without it, I’m not sure I would have ever watched the series itself. Plus, it might have the most brilliantly bizarre moments of deadpan humor of any horror movie. (And let’s be clear, Fire Walk With Me is a straight horror-thriller. It’s not just scary, it’s also hella disturbing. I’d advise against watching it alone. Ever.) Like the moment where Donna, upon inspecting Laura’s living room ashtray, announces “If I had a nickel for every cigarette your mom smoked, I’d be dead.” Or the following A+++++++ genius lines from this movie.

(Start the following clip around 2:20 mark)

In fact, writing for the Washington Post in August of 1992, critic Rita Kempley savagely reviewed Fire Walk With Me:

There are times when Peaks-speak is wholly mumbo jumbo. There’s the scene in which Jacques, the French Canadian proprietor of the Power and Glory, tells Laura, “I am the Great Went,” to which she responds, “I am the muffin.” Jacques returns, “I’m as blank as a fart.” Maybe all Jacques is saying is “I am full of gas.” Certainly “Twin Peaks: Fire Walk With Me” seems to be.

So yeah, I guess if you don’t like weird wordplay, horrifyingly realistic depictions of assault and abuse, drug use, rape and murder, maybe Fire Walk With Me isn’t for you. But that probably means Twin Peaks isn’t for you, either. If the new TP is supposed to be the “pure heroin version of Lynch,” Fire Walk With Me is Lynch on pure PCP: it’s darker, more volatile, and will leave you with endless nightmares for the rest of your god-given life.

…On the plus side, you get David Bowie. 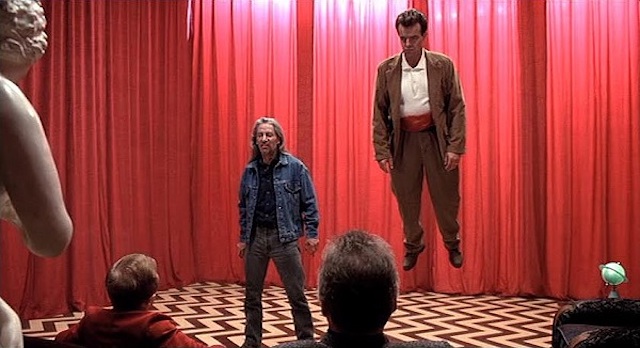