In retrospect, the amount of secrecy regarding last night’s Showtime premiere of Twin Peaks: The Return seems a little ridiculous. Unlike, say, your average Game of Thrones episode, two hours inside the mind of David Lynch doesn’t lend itself to what you might consider a “spoiler-heavy” narrative: having rewatched both episodes three times in the last several hours, I can’t think of one thing in the show that, had I been told about it in advance, would have made any impact in my viewing experience. It would be like saying “Spoiler alert: Eraserhead has a scene where a lady with weird cheeks tap dances on top of fluttering spinal cords that flutter down onto a stage.” Even in context, we’re talking about a story that relies more on symbolism and our fan-brains working at 120 percent than anything like a three-act plot structure. Trying to recap a David Lynch show is like being asked to review a nightmare: no matter how well I try to explain it, it’s gonna be one of those “you had to have been there” things. Which, ultimately, is the point of Twin Peaks: either you get it, or you don’t. Either you had that dream too, or you didn’t.

Eraserhead is actually where I want to start with all this, because it’s really that film, along with Inland Empire and Fire Walk With Me, it’s the closest example to what this new Twin Peaks is shaping up to be. We even open on a black and white version of the Black Lodge, where the Giant (a weirdly non-aging Carel Struycken, but that’s a point for further down) is telling Agent Dale Cooper (a nonplussed Kyle Maclachlan, still stoic and enunciated after all these years) to “listen to the sounds” coming out of an old gramophone, out of which comes the sound of a million skittering bug legs. Later, we will see Mike’s Left Arm, aka Bob aka The Man From the Other Place, aka “The Arm” (which is sort of like…okay, so if one-armed Mike is the Jacob of Twin Peaks, Bob would be the Smoke Monster. Two halves of the same coin, doppelgangers, yadda yadda) as manifested by a very Eraserhead-y looking spinal stalk with a bulb on the end.

Lynch, some of you might know, is an artist with a capital A. In fact, his early “films” are what he refers to as moving pictures, and that seems like a more applicable term here for what Twin Peaks is than “a TV show.” No, it’s like a piece of conceptual art that just happens to be working within the medium of television.

That is maybe the most pretentious thing I’ve ever said. I’m so sorry.

Dale is informed he can only leave the Black Lodge if he “swaps” back with Bob, who is currently in control of his body and more importantly his hairdo.

Side-note: I am pretty sure Kyle-as-Bob was created by David Lynch as a direct response to that blackout episode of Portlandia, by the way. Because…same, tbh:

So, for the past 25 years, Dale Cooper has been straight cold-chilling in the Black Lodge, not looking too worse for wear and not even seeming that put out by stuff like Laura Palmer opening her goddamn face to show she’s kissing cousins with the deadlights from IT. Does this mean Bob and crew are some sort of alien lifeform? Is this a show about space stuff???

The Black Lodge stuff worked so well for me, because that’s the Twin Peaks I showed up for. The actor who played Bob, that otherworldly incarnation of evil on the show, Frank Silva, has passed on, but Maclachlan does a damn fine impression of him. So does that creepy stalk sculpture, btw.

Meanwhile…outside the Black Lodge, it doesn’t seem like life in the Pacific Northwest town of Twin Peaks has changed very much. Like…barely at all, even. Except now I guess everyone gets along? You know, I didn’t find any of the story taking place in the town to be that interesting these past two episodes, but maybe it’s because the median age at this point seems to be somewhere between “Gandolf” and “Waldorf.” Enter Ben and Jerry Horne, stage left. These two are great: like imagine if the ruling class of Gilead just didn’t AF about having any babies around (and had a way more relaxed position re: transporting product over the Canadian Border), they’d be the Hornes.

And yeah, I mean it’s perfect that these two spend their entire scene together talking about edibles (Jerry has a new business!) and how hot Ben’s secretary is, and approximately zero seconds following up on questions like “Hey, what happened to your daughter, Audrey? My niece? Was she killed in that bank explosion?” Or like “Why did we become the Cryptkeepers and Ray Wise looks like he hasn’t aged a GODDAMN DAY?” Or even: “Shit, didn’t I have a wife and an emotionally stunted son at one point?” “Yeah and I think we owned a brothel at one point, who knows!”

Nah man, the brothers Horne are just like, the super grossest.

Dr. Jacoby (Russ Tamblyn) is still living in the woods, and that moment he takes off his sunglasses to reveal those OTHER set of red-and-blue lens underneath? That was the highlight of my fucking life.

MEANWHILE: Um, there are two Sheriff Trumans now? Deputy Hawk is out in the woods with a flashlight, just texting with his bestie, the Log Lady. Now there’s a dynamic I’d love to explore! Are those two a thing now? James and Bobby are doing their own version of doppleganging, but it’s less like “good guy/bad guy” and more like “the two ways your mid-life crisis can manifest.”

(Extra credit for spotting Jacque attack still bartending. Didn’t he end up in jail for like….ever?) This all goes down at The Roadhouse, at the end of the second episode, which is a callback to the last opening minutes of the Twin Peaks pilot, in which Bobby and James have a fight (oh and Mike was there) and end up in jail. This time, it’s the same Bobby/James stand-off as they look to the booth where Shelley (HEY SHELLY!) is hanging out with some new friends. Good for you, Shelley! You were always a little too normal for this crowd; glad to see you’ve apparently cut things off with that ex who was once accused of murdering his ex, and also from your other ex, Leo, who def was a Liev Schrieber character ahead of his time.  Do James and Bobby even have beef, still? Everyone definitely seems like they’ve mellowed out in their older age, and there’s definitely that “we’ve all moved on with our lives” vibe that only Sarah Palmer isn’t jamming with. She’s too busy trying out for Ellen Berken’s role in Requiem for a Dream. Lest you think Laura Palmer’s death left no residual impact on the town, that sad, sad scene with Sarah watching the gnarliest animal show (looking for that flash of a white horse?) and surrounded by a hoarder’s version of the Palmer’s living room.

MEANWHILE! Woof! Okay, so outside of Twin Peaks, we’ve got two  or three other plot to get through, but it won’t take too long, because they are already David Lynch movie tropes. Like in North Dakota, where Bill Hastings (Matthew Lillard is subbing in for Bill Pullman in Lost Highway)  can’t remember if he might have murdered a woman he was having an affair with or not. Lillard, who I’ve loved from his earliest unhinged role in Scream, is a perfect fit for a Lynch project…his ping-ponging energy and sheer intensity make it really hard not to get an icky vibe from this guy, even while feeling bad for him. Hey! Remember how Lost Highway was supposed to be about OJ? That was weird! Hey, remember how Lillard’s wife was played by Cornelia Guest for some reason? That was even weirder! The MOST WEIRD (a phrase I’ll be over-taxing in the upcoming weeks) about this storyline though is that Hastings didn’t just like, smash Theresa’s head in with a TV set, he straight-up 7’ed her ass…an activity you would assume would take a lot more predetermination and organized planning than your typical possession cases.

We also see Bob inhabiting Dale’s body and going on like…a road-trip? Where he meets up with other like-minded…people….demon….things? I love that Bob, who again is supposed to be this embodiment of pure evil, has apparently been using that last 25 years to grow out a mullet, keep tabs on Hastings via some FBI uplink-hardware. (Dear Diane: BUT HER EMAILS THO!) and otherwise be not unlike a brusquer version of Mr. Wednesday in American Gods. Like, he straight up just beats the shit out of some kid guarding a door to this cabin, and there are other people in the cabin, and they look appropriately Lynchian and shit, and instead of anything hella weird happening, Bob sits down and engages in (relatively) normal conversation about replacing the hired help.

So…does Bob have a support network? Are there dating apps for the unholy? What about the couple he takes with him on the brief Wild at Heart detour in the second episode, Ray (George Griffith) and Darya (Nicole LaLiberte), who both bite it after accepting $500k for a hit job on this Evil Cooper? If you didn’t see traces of Hopkins in Blue Velvet or Dafoe in Wild at Heart in that creepy scene with Bob/Dale and Darya, tell me where to get those edibles. (From Jerry, right?) There’s something even a little, dare a say, Stephen King-ish in this New Coop: he’s got that Randall Flagg thing going on, and the “supernatural beings that aren’t that great at being scary” is straight out of Doctor Sleep. The problem with humanizing or explaining Bob’s motivations in any way zap some of powerful, totemic fear he instilled in us first time around. Like: monsters can’t have friends. It’s one or the other, buddy! Choose a side!

I’ve saved the most intriguing storyline of all for last: that would be the one with the boy in the locked room, trying to photograph something intangible in a glass box, and his lady friend, with the “way to normal to survive past another episode” name of Stacy. I could try to describe to you what went on in those Camera Three segments of Twin Peaks: The Return…but hey, we both had the same nightmare, right?

Note to Diane: If you were trying to sell Twin Peaks to today’s youths, would the pitch be: “It’s like Fargo meets The O.A.” or “It’s like if American Gods had a baby with American Crime Story?” Discuss! 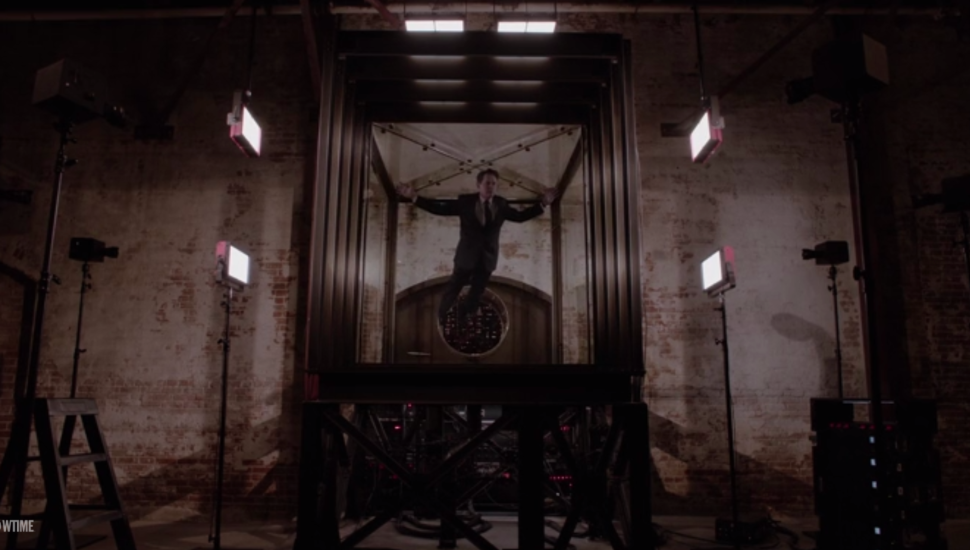