In my last column, I explained how rising tumult in the Balkans threatens to bring chaos and war to that troubled region again, in a repeat of the violent 1990s—and perhaps even worse. Russian meddling in the region promises to push fragile and impoverished societies over the edge, a prospect which threatens all Southeastern Europe. As I concluded:

It is therefore in the West’s interest to tamp down festering crises in the Balkans—above all in Macedonia—before they get out of hand. That will require keeping Russian malfeasance in the region to a tolerable level, yet it will also require NATO and the EU to confront the reality that the solutions they imposed on the former Yugoslavia in the 1990s are no longer functioning. Indeed, they constitute a big part of the problems imperiling Southeastern Europe today.

But how to Putin-proof the Balkans before something awful happens? Blunting Kremlin spy-games is the first task at hand, and here NATO security services can assist local partners in unmasking Russian espionage, propaganda and subversion. The Atlantic Alliance must help Southeastern Europe resist aggressive moves like the violent coup plotted by Putin’s spies against Montenegro a few months ago.

That’s the easy part, however. The real challenge facing the West is undoing the damage we inadvertently wrought on the wreckage of Yugoslavia nearly a generation ago. NATO, led by Washington, deserves credit for entering the Bosnian war in earnest in 1995 and putting an end to that fratricidal nightmare. We did better in Kosovo four years later, stopping that ugly ethnic war before outright genocide materialized.

That said, Western political aims were trickier to realize than military ones. Across the former Yugoslavia, NATO and the EU insisted on preserving the internal borders of the collapsed Communist regime, even though these represented the bureaucratic whim of Red functionaries rather than ethnic realities.

It was obvious that this approach was bound to fail. Lessons of the recent past were blithely ignored. The only reason Central Europe is at peace now is that vast numbers of Germans were expelled from Poland, Czechoslovakia, and the rest of the region after the defeat of the Third Reich. This was a horrific crime perpetrated by Stalinists—more than 12 million Germans, nearly all civilians, were evicted at gunpoint, with as many as two million of them dying in the process—yet it purchased long-term tranquility.

Even in the Balkans, that boundaries produce ethnic peace was glaringly obvious yet ignored. Croatia’s victory offensive in August 1995—Operation Storm, Europe’s biggest military operation since the Second World War—resulted in the expulsion of most of the country’s Serbian minority. As many as a quarter-million Serbs fled before the advancing Croatian military, and few of them have returned in the two decades since, despite incentives to do so. To most Croats, this was fitting punishment for the Serbian uprising in 1991 that plunged their country into war in the first place, as well as a guarantee that it can’t happen again.

This was deeply distressing to Western advisers, however, who have consistently sought to put Humpty Dumpty back together in the Balkans, overturning the verdicts of the messy wars of the 1990s. Across the region, NATO and EU mandarins have pushed fantasies of ethnic coexistence and harmony, insisting that Communist-era “brotherhood and unity” among the diverse peoples of the former Yugoslavia can be recreated, given enough stern lectures and aid money.

The painful truth is that Marshal Tito kept Yugoslavia together with a combination of charisma, political talent, and a very unpleasant secret police force—none of which are possessed by NATO or the EU. Rather than accept this unwelcome reality, the West has tried to keep Communist-drawn boundaries in place, and everywhere it’s failed. In both Bosnia and Kosovo, minorities who fled or were expelled during the fighting have overwhelmingly refused to go home. Whether this is motivated more by fear or ethnic particularism is debatable—but the fact that refugees don’t want to return is not.

It’s therefore past time for the West to admit its failure and give Southeastern Europe what it actually needs—normal nation-states with coherent boundaries. This will require a redrawing of Tito’s map, which will bring wins and losses for all ethnic groups. If this change is executed justly, however, long-term results will be more edifying than the hazardous mess which currently exists under NATO and EU auspices.

First, Bosnia. This ramshackle pseudo-state has never recovered from its 1992-95 catastrophe, while billions of Western aid dollars have disappeared thanks to rampant corruption and crime. Awkwardly divided between the Muslim-Croat Federation and the Serbian Republic or Republika Srpska, Bosnia as created by the Americans in Dayton, Ohio at the end of 1995 isn’t a functional polity, and never will be. Dayton was meant to be a short-term remedy for Bosnia’s bleeding wounds, yet it’s become permanent and unreformable—even though hardly anybody in the country wants it, as-is, any longer.

Therefore, it’s time to end it, not mend it. Let the Republika Srpska join Serbia, as they have long wanted. Since nobody can rationally explain why the Communist-era borders of Serbia can be altered – as they were after the Kosovo war—but Bosnia’s cannot be, NATO and the EU need to halt this hypocrisy which only makes Serbs dislike the West even more. Ethnically Croatian parts of the country, particularly western Hercegovina, should be permitted to join neighboring Croatia; most locals have Croatian passports already.

The rest of Bosnia, which is now overwhelmingly Muslim – its capital Sarajevo, before 1992 a multicultural jewel, now has few Christians left—should be permitted to go its own way, as a fast-tracked member of both NATO and the EU. This small country will be closely linked to Croatia in economic and political terms, while bringing rump Bosnia into Western political and security structures can only enhance regional stability. This will help stifle Bosnia’s unpleasant jihadist problem to boot.

The West must abandon its fantasy that long-term peace in the Balkans can be achieved by isolating Serbia, the region’s preeminent country. However, Serbia must make compromises too. That will come in Kosovo, which Belgrade must accept is an independent country and stop meddling with spies and provocateurs. Greater Albania is coming, one way or the other, and it’s best to achieve it under peaceful auspices. Allow Kosovo to unite with Albania, which is already a NATO and EU member. An added benefit will be bringing Albania’s notably effective methods of countering jihadism to Kosovo, where the problem is rising fast.

In exchange, Serbia should receive Kosovo’s north Mitrovica region, which is heavily Serbian and borders Serbia. Serbian religious sites in Kosovo—ancient monasteries which are priceless to Serbian Orthodoxy—should be declared extraterritorial and placed under UN protection, with free movement for Serbs who wish to visit or reside there.

In exchange for losing north Mitrovica, Kosovo should gain the Preševo valley, which is largely Albanian and borders Kosovo. Local Albanians staged a brief armed uprising in 2001, which panicked Belgrade. It’s best to give the valley to Kosovo—in other words Greater Albania—before the next outburst of violence.

Serbia’s minorities deserve attention too. In the north, ethnically mixed Vojvodina has enjoyed a degree of political autonomy since 2008, including its own regional assembly. In the southwest, Serbia’s heavily Muslim Sandžak region has no such arrangement, although some sort of autonomy may be wise, given persistent restlessness among some Sandžak Muslims. That is an internal matter for Serbia and any remedy should be suggested by the West, not mandated. If Serbia wishes to enter NATO and the EU, however, some autonomy for Sandžak, akin to Vojvodina’s arrangement, may be required.

The big loser in redrawing the Balkan map will be Macedonia, which is currently the focus of instability which could easily imperil the whole of Southeastern Europe. Creating Greater Albania will mean significant losses for Macedonia, basically the country’s northwest, which is overwhelmingly Albanian by ethnicity. In exchange, Skopje should be first in line to receive invitations to join NATO and the EU, plus generous helpings of Western aid to salve the wounds of territorial loss.

This scheme, whatever its shortcomings, will resolve nearly all the outstanding ethno-territorial flashpoints in the former Yugoslavia while bringing every country except Serbia into Western political and security structures. This will be the foundation of lasting peace in a region which sorely needs it. It is to be hoped that Belgrade, finding itself surrounded by NATO and EU members, will seek admission as well—but if it does not, the West can easily contain Putin’s Serbian client state.

Moscow is the wild card here, particularly since Putin is clearly seeking to stir up trouble in the Balkans right now. However, if we treat the Kremlin as a full partner in any territorial changes in Southeastern Europe—precisely as Putin feels his country was not in the 1990s—we can expect a degree of cooperation. Particularly because Moscow’s “little brother” Serbia will have gains, not just losses, to show this time.

This will resemble an updated version of 1878’s Congress of Berlin, but with input from the locals this time. All major stakeholders must be involved—NATO, the EU, the Russians, and all the Balkan countries that will be impacted. But Washington must take the lead, just as we did with Bosnia and Kosovo in the 1990s. The Europeans can’t sort this out themselves, given their constant internecine squabbling, and we really don’t want Moscow to take the lead here.

There’s also a moral obligation. One hundred years ago, America entered the First World War with President Woodrow Wilson proclaiming the new age of nation-states to replace decrepit multinational empires. Failing to achieve that in a just fashion after 1918 predestined the next, far worse world war. Then, in the 1990s, Americans and their European partners tried to fix the war-torn Balkans, yet botched the job precisely because they failed to implement Wilsonian nation-state principles.

Only when the West accepts that the peoples of Southeastern Europe will achieve peace when they’re living in more-or-less coherent nation-states—just like Germany or Poland or Denmark—can we expect the Balkans to calm down and start addressing their very grave problems of poverty, crime, and corruption which still linger from Yugoslavia and its violent collapse.

Russian meddling in the Balkans has a bad track record of leading to far bigger problems, so it’s imperative that the West starts trying to undo the damage it wrought on Southeastern Europe, however inadvertently, in the 1990s. Nobody sensible wants to revisit the Sarajevo crisis of 1914, this time with nuclear weapons. Although the Trump administration has its hands full with a host of foreign policy challenges around the globe, ignoring the Balkans promises to lead to a great power crisis which can and should be averted. 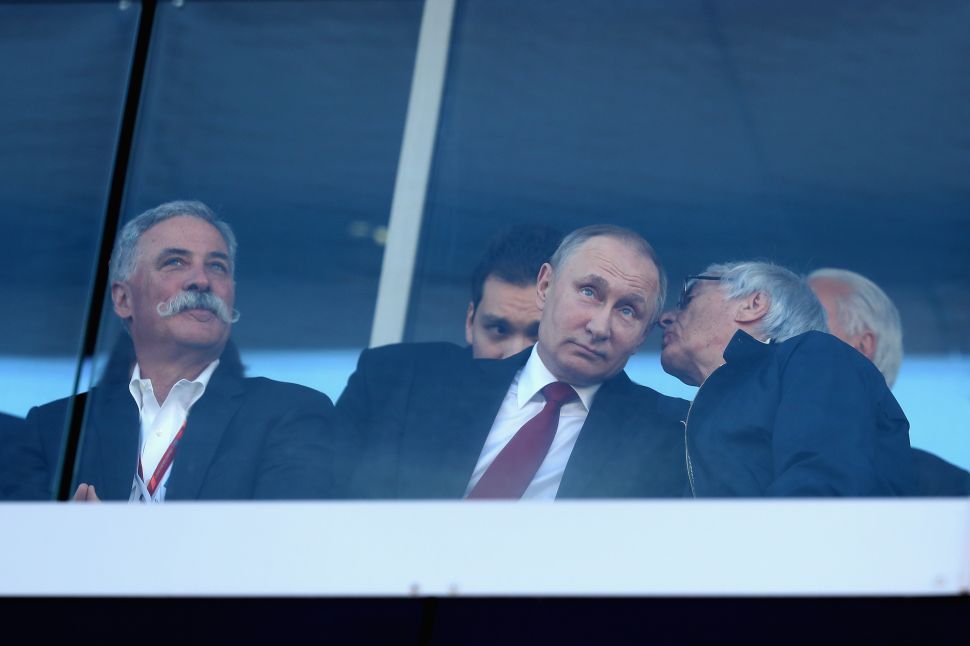