HELP ME PLEASE. A MAN NEEDS HIS NUGGS pic.twitter.com/4SrfHmEMo3

The guy begging for retweets for free Wendy’s chicken nuggets has officially succeeded in one of the most ridiculous viral campaigns ever.

Carter Wilkerson, the 16-year-old behind #NuggsForCarter who became a viral sensation after making a deal with the sassy Wendy’s Twitter, just broke Ellen Degeneres’s record for the most retweeted post on Twitter. And while he didn’t get the 18 million retweets needed to get free nuggets for a year, Wendy’s decided the record breaking 3.4 million shares is enough to call it a victory.

Tuesday morning, Wilkerson and Wendy’s shared a number of tweets promoting the win, which includes free nuggets for a year, a world record title and the fast food chain making a $100,000 donation to the Dave Thomas Foundation for Adoption.

.@carterjwm is now the most retweeted tweet of all-time. That’s good for the nuggets, and $100k to @DTFA. Consider it done. #nuggsforcarter pic.twitter.com/k6uhsJiP4E

Hey @TheEllenShow sorry about that… Can I still keep my TV and Underwear??

We did it guys! Thanks to you're help and support we were able to raise $100k for @DTFA and beat @TheEllenShow record! Now let's get 18mil!

Even Guinness World Record chimed in with an official congratulatory tweet.

As Wilkerson details on his website—and as Wendy’s made clear with the impossible goal of 18 million—this all started out as a joke.

“I was laying in my bed scrolling through my Twitter timeline when I thought of something. I recalled tweets I have seen where kids will text their parents asking ‘How many retweets for a dog?’ types of questions,” reads his site. “I decided to kick it up a notch and ask my favorite fast food restaurant the same type of question, ‘How many retweets for a year of free nuggs?’ After I received an outrageous goal of 18 million, I just thought of it as a silly joke to laugh at with my friends, so I replied ‘Consider it done.’ Then it took off and now I am making twitter history. 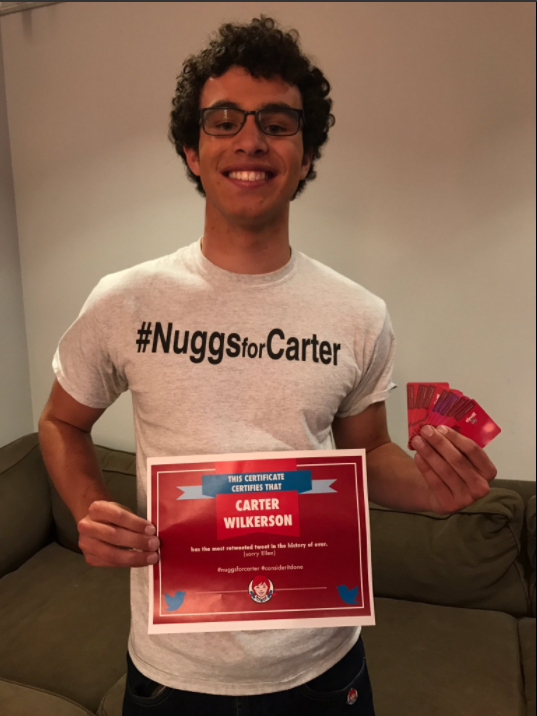