New York Frieze Week has arrived just in time for Spring, bringing with it a flurry of fairs, exhibitions and can’t-miss art world events all across the city. But one of the week’s most exciting participatory art projects won’t be found inside the snake-shaped tent on Randall’s Island. No, artist Jonathan Horowitz will be setting up a public studio for passersby to paint black dots inside Westfield World Trade Center’s Oculus transit hub in Lower Manhattan.

Horowitz’s participatory art installation, called 1612 DOTS, is the newest iteration in a ongoing series, and the first major partnership the Oculus has done with an artist in its community programming series on the Oculus floor. Horowitz has previously staged the interactive work at venues such as the Swiss Institute in New York, 356 Mission in Los Angeles and 2015’s Frieze Art Fair on Randall’s, which is where I had the opportunity to try my own hand at completing the not-so easy task.

Having done this once myself (evidence provided in the photo below) let me tell you what to expect when it comes to painting dots. You will be given strict instructions to paint an eight-inch, solid black dot using only the tools provided, which are black paint, a paintbrush, to clean your brush and your canvas. A note from experience: painting without watering down the pigment is actually pretty tough, so smooth edges won’t come easy unless you really pile it on.

Horowitz and his assistants will set up their pop-up workshop on the Oculus floor’s East end, providing tables and chairs for participants to sit and paint in comfort. A unique feature of Horowitz’s “Dot Series” is that each iteration has featured a slightly different set-up, dependent on the space. But besides the act of dot painting itself, one constant is the ever-changing display of the dots, which are hung as soon as they’re complete. At the Oculus, temporary walls will be erected for their display.

“The beauty is that every iteration takes place in a different space, with a different audience,” Westfield executive director of Arts and Culture Isolde Brielmaier told me. “It’s about being open.”

Considering that the Oculus is an active transportation hub, with hundreds if not thousands moving through its ribbed interior hall daily, the public audience for Horowitz’s latest work has the potential to be considerably different (think more commuters) than visitors to the Frieze Art Fair, or any of the galleries where he has mounted the project in the past.

“One of the most exciting components is the accidental audience, who are not coming for art but stumble upon something cool and dynamic,” says Brielmaier. She explained that the Oculus’ broad “cross section of New Yorkers,” some of whom may be running to catch a train or simply viewing the space as a tourist, will help define the project.

“Through the process of painting a dot, you have to come to terms with your limitations. So the project is about acceptance, both of yourself and others,” Horowitz said about his Frieze Week project in a statement. “It felt especially right to stage the project in Lower Manhattan, with its history of welcoming immigrants and diverse cultural life.”

No matter what form Horowitz’s “Dot Series” takes, the project brings strangers from all walks of life together for one common purpose. As Brielmaier says, “You come as an individual, but you’re sitting next to strangers…Once the dots are placed on the walls, we’ve created a community of dots.” 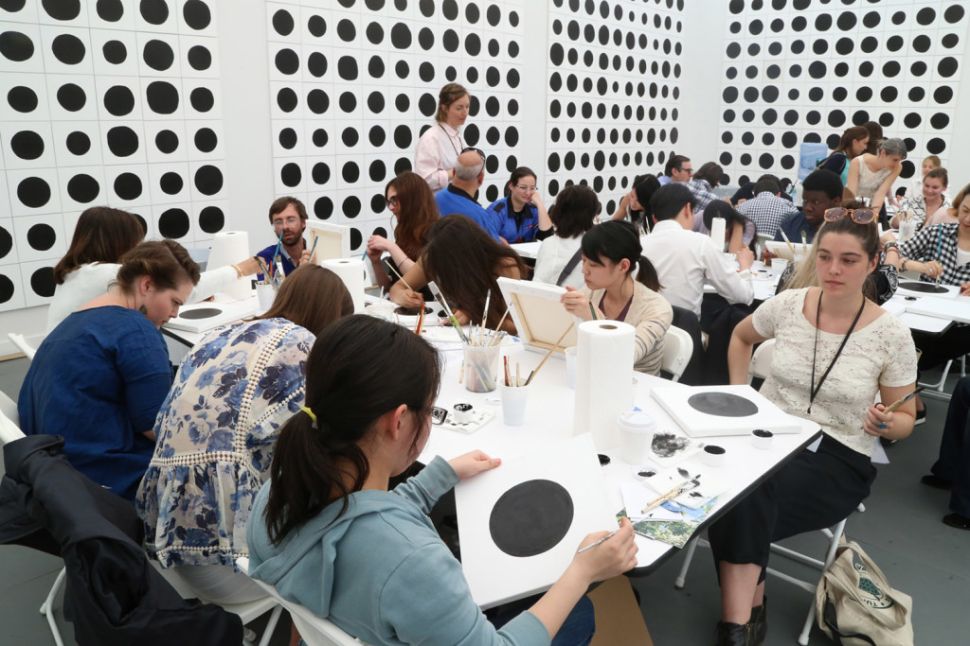