Artist and filmmaker Julian Schnabel has finally cast the titular role for his forthcoming biopic, titled At Eternity’s Gate, about post-impressionist painter Vincent van Gogh—and I feel slighted. Despite my pleas that Schnabel consider Modern Family‘s van Gogh-lookalike Jesse Tyler Ferguson for the part, the director has instead announced that the sunhat wearing, ear-chopping, cypress tree-obsessed artist will be played by Willem Dafoe, according to the Hollywood Reporter.

Not familiar with Dafoe’s work? Here’s a quick refresher: he’s known for terrorizing Tobey Maguire’s 2002 Spider-Man film as the Green Goblin, animating a gun fight with an interpretive dance in 1999’s The Boondock Saints and playing an actor playing an actor who may or may not have been an actual vampire in 2000’s Shadow of the Vampire. But soon enough, the actor will take on the visionary Dutchman who famously took his own life before hitting it big, in a story which Schnabel says will focus on the artist’s time spent living in Arles and Auvers-sur-Oise, France.

“This is a film about painting and a painter and their relationship to infinity,” Schnabel told THR. “It is told by a painter. It contains what I felt were essential moments in his life, this is not the official history—it’s my version. One that I hope could make you closer to him.”

I have no doubt that Dafoe has the chops to embody the eccentric role of van Gogh, considering his track record with memorable and quirky characters. Plus, this isn’t the first time he’s work with Schnabel; he’s credited as playing “The Electrician” in the artist’s 1996 film Basquiat. However Dafoe, at 61 years of age, is already significantly older than van Gogh was when he took his own life in 1890. By that measure, perhaps we can interpret Schnabel’s notion of “infinity” to mean that in this version of history van Gogh did, in fact, not die early? Maybe he didn’t die at all, and when Dafoe played Max Schreck in Shadow of Vampire he was actually playing the undead version of van Gogh all along. I’m actually really on board with a sci-fi/fantasy retelling of van Gogh’s story, if that’s the route Schnabel is headed, and please let it be so.

But if I’ve gone too far out on a limb with my theory that Schnabel’s film is actually a vampire flick, than at least we can look forward to seeing some old school stage effects in play. Let’s not forget, the magic of movie make-up can work wonders—just look what it did for Hugh Jackman in Logan, where he played both young and old versions of Wolverine, and for Star-Lord’s planet Dad Kurt Russell in Guardians of the Galaxy Vol. 2.

So, all van Gogh-fan fiction pitches aside, I look forward to seeing Schnabel linger on close-ups of a youthful Dafoe making this face (below) every time he finishes painting a cypress tree. And it is—I feel closer to him already. 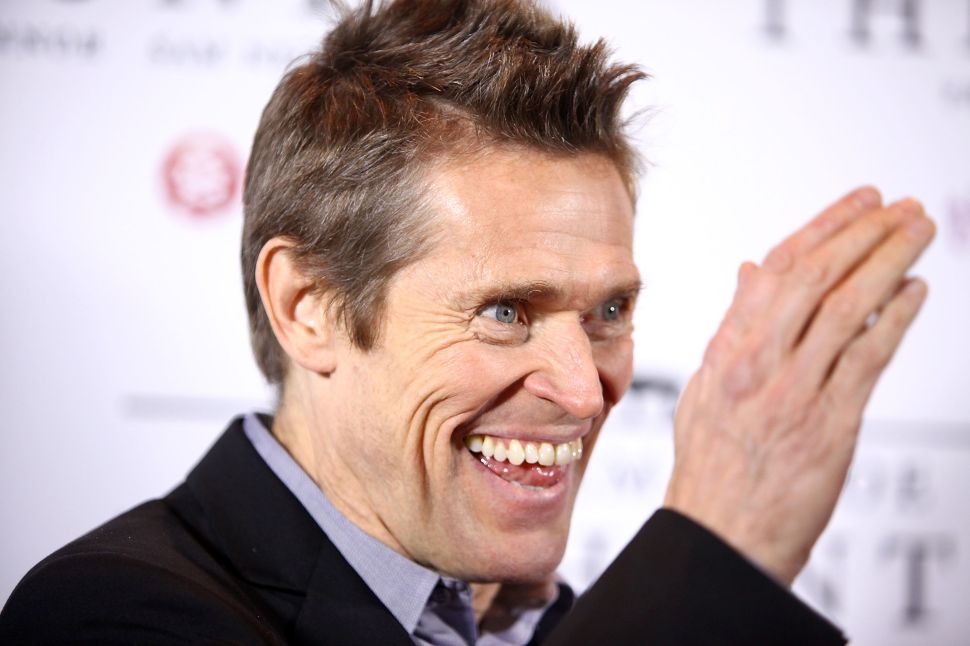