The folks over at Atlas Obscura have done God’s work by creating a comprehensive and exhaustive “List of Wonderfully Specific Museums.” Their map spans North America, Europe, Asia and Australia and includes an eccentric assortment of private, DIY collections of objects and oddities ranging from watering cans and ticks to Pez dispensers and buttons.

Among the 86 off-the-beaten path museums listed are a few for the more adventurous art lovers out there, in case any of you are looking to supplement summer fun outside of some of the larger, well-known encyclopedic institutions such as the Louvre or the Met. I parsed Atlas Obscura’s list and here are a few of my favorite art-themed museums, which I fully intend to add to my bucket list, along with one museum I really never, ever want to go anywhere near because it scares me—but that doesn’t mean you shouldn’t go!

Dog Collar Museum (Kent, England)
Dog collars were once a fine art, and apparently served a practical purpose for hunting dogs (shielding their throats from woodland predators) in addition to being an over-the-top display of frivolity for the wealthy elite, according to Atlas Obscura. Leeds Castle’s collection features over 100 examples of ornate dog collars from 15th century through the early 20th century.

The Smile Face Museum (New York, New York)
While this exhibit is no longer on display in Brooklyn but rather touring, just knowing that one devoted Smiley Face fan was so enamored of the OG emoji that he collected over 5,000 examples of the design, ranging from cups and toys to t-shirts and purses, brings warmth to my cold heart.

Gnomesville (Wellington Mill, Australia)
The story behind Gnomesville originates with a public protest by locals that began over 20 years ago to stop a road development. One brilliant person started a veritable movement by placing a single gnome near the road in question, and two decades later crowdsourcing and the fascination of strangers has led to a population explosion of thousands of gnomes who now reside in the wood.

The American Toby Jug Museum (Evanston, Illinois)
Officially, the “Toby” jug is a ceramic drinking vessel shaped like a person—head to toe. Unofficially, the Toby jug has been known to take the form of a head. This museum includes the likenesses of Winston Churchill and Captain, among many others tucked in its stores of over 8,000.

Barney Smith’s Toilet Seat Art Museum (San Antonio, Texas)
Master plumber Barney Smith is also a prolific artist who has chosen one of the more common tools of his former trade as his medium: the toilet seat. Smith has placed his oeuvre of painted, sculptured and decorated seats on display in his garage and accepts artistic contributions from visitors.

Nasothek Nose Collection (Copenhagen, Denmark)
The conservation practice of replacing broken appendages on the damaged bodies of Greek and Roman statues is no longer the industry standard. (We can tell a fake nose when we see one). Now, Cophenhagen’s Glyptotek art museum has decided to proudly display the plaster discards once used to spruce up ancient works.

Angel Museum (Beloit, Wisconsin)
This private collection of 13,600 angel figurines was begun by Joyce and Lowell Berg from Beloit, Wisconsin while vacationing in 1976. It includes a significant gift from none other than Oprah Winfrey, who donated a collection of 600 black angels acquired from viewers of her talk show. Considering that Oprah auctioned off a portion of her art collection in 2015, this is a rare chance to see so much of it together in one place.

Vent Haven Museum (Fort Mitchell, Kentucky)
Have you ever heard of the Annabelle doll? The Raggedy Ann toy that now resides paranormal investigators Ed and Lorraine Warren’s Connecticut Occult Museum, a.k.a locked room of scary things you’d never want to go near—ever. In short, the doll is possessed, and its story is now the subject of an eponymous feature length horror film. Despite my doll hang-ups, the museums is annual destination for ventriloquists every year who convene to talk shop for a July “ConVENTion,” according to Atlas Obscura. 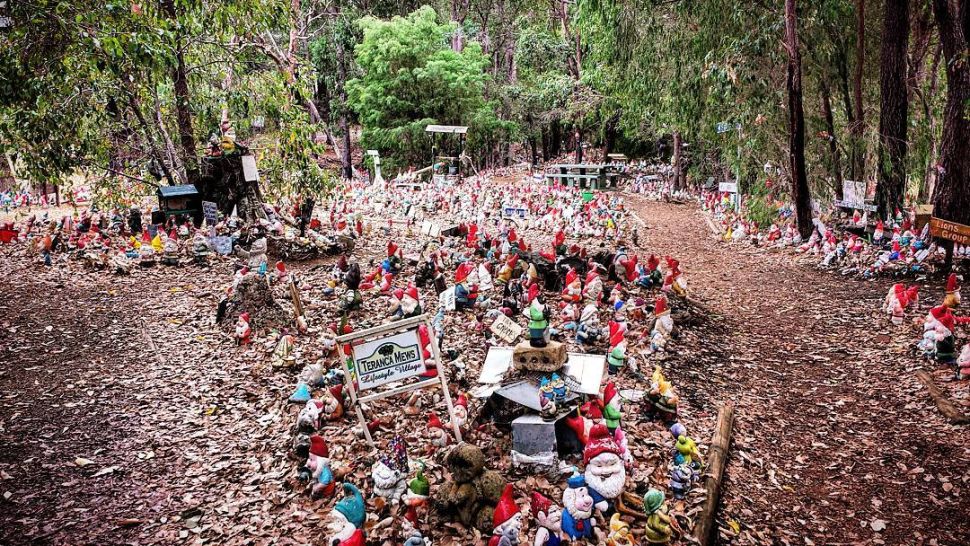