Leonardo DiCaprio in ‘The Great Gatsby. (Photo via Imgur)

From Trump and Ferragamo to Selleck and Grimaldi, you may recognize the last names of some of these social fixtures, and while their parents may hail from the worlds of politics or real estate, these PYTs are striking out on their own to make a name for themselves. Here, we’ve selected 20 of our favorite social fixtures on the rise.

The 24-year-old daughter of Tommy Hilfiger has followed in the footsteps of her older sister, Ally Hilfiger, who once pursued her own career in design under the moniker NAAM. Now Elizabeth is diving into the fashion-sphere with her streetwear brand Foo and Foo. 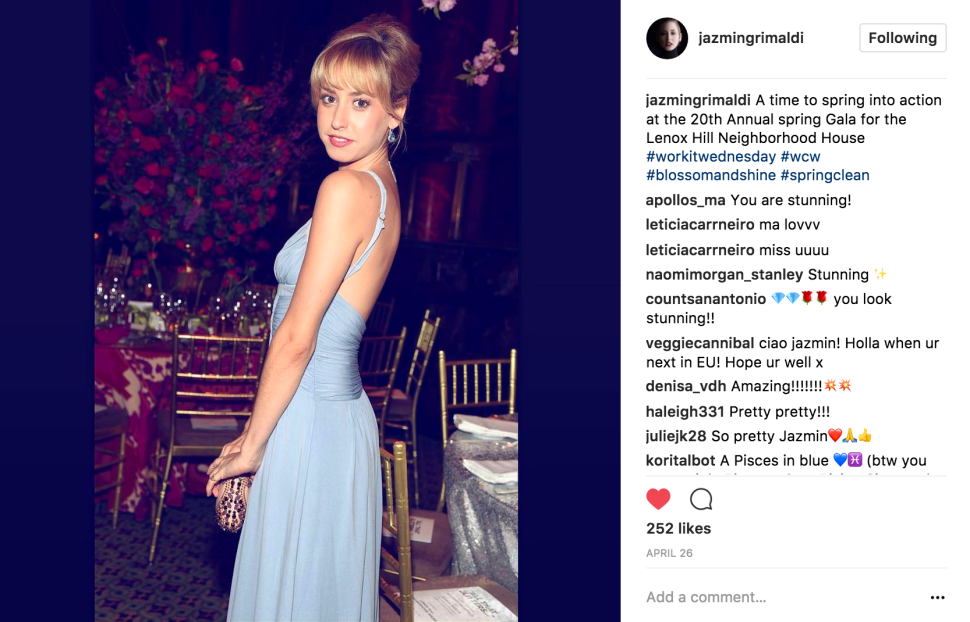 The 25-year-old granddaughter of Grace Kelley has separated herself from the royal fray by planting herself in New York. While she regularly attends art-centric events like gallery openings and film screenings, she is a new darling of Salvatore Ferragamo, who dresses the budding actress and singer in their wares. She and Ian Mellencamp, nephew of crooner John Mellencamp, are also a self-proclaimed #powercouple.

3. Paige Johnson
https://www.instagram.com/p/BQojzpfABmE/
This daughter of BET co-founder couple Bob and Sheila Johnson adheres to the equestrian schedule thanks to her talented show jumping skills, spending much of her time in the horse-capital of the U.S., Wellington, Florida, with the likes of Georgina Bloomberg and Ariana Rockefeller.

This talented 23-year-old is a jack of all trades as the founder of lifestyle publication Friend of a Friend, a member of the fashion partnerships team at shopping hub Spring, and a contributor to Forbes magazine. She’s often spotted on the fashion circuit, and counts Bella Hadid as one of her New York City roommates.

The son of self-made publishing magnates Prosper and Martine Assouline, 24-year-old Alexandre Assouline has been tasked with overhauling the storied book publisher known best for their hefty coffee table tomes. In the last two years as his role of Director of Marketing & Digital Operations, Assouline has spearheaded a clear effort to bring a younger energy to the business by frequently holding parties several times each month. Prior to this position, he held a variety of posts within the family business, as well as a ten month stint as a marketing representative for Tinder Canada.

These inseparable siblings might be real estate heirs, whose last name graces Manhattan landmarks, but the two also have a penchant for philanthropy. At just 22- and 24-years-old respectively, Larry and Toby both sit on the junior committees for The Frick Collection, The High Line Summer Gala and The American Ballet Theater.

And they lived happily ever after ☄✨💥💫💖💓

A recent graduate of New York University with a degree from the Gallatin School of Individualized Study, 24-year-old Colby Jordan is perhaps known best for her love for art and fashion via her blog entitled Minnie Muse, but also for her crew of well-heeled party people like Dasha Zukhova, Sarah Hoover, Derek Blasberg, and, of course, her husband Alberto “Tico” Mugrabi who is said to have the largest personal collection of Warhol artworks in the world. Colby and Alberto wed last summer at the Hôtel du Cap Eden-Roc, the site of many high profile nuptials. However, the couple was thrust into the national spotlight when word of their extensive security detail was leaked. It infamously came complete with a set of falcons trained to attacked the prying eyes of drone cameras. She is now a regular patron of the arts, including the opening of denim magnate Paul Marciano’s new museum in Los Angeles, The Marciano Foundation.

I'm going to shoot you right in the peanuts

28-year-old Daisy Johnson is the youngest of the Johnson & Johnson heirs. While her cousin infamously lampooned his privileged friends like Ivanka Trump and gaming heir Luke Weil in the 2003 documentary Born Rich, Daisy has opted for the camera in a different capacity, focusing on portrait photography.

Gaby, 23, and Charlie, 21, are the sons of real estate, restaurant, and art world scion Aby Rosen. They’re regularly spotted by their father’s side, and are slated to follow in his footsteps starting with their partnership in the wildly popular Cha Cha Matcha.

The last name says it all. While this daughter of POTUS may not live in the White House, she has followed the Trump family tradition of attending the University of Pennsylvania, where she graduated from last May after juggling her courses with a significant role on the Trump 2016 campaign trail. When she does find time to visit New York to see her friends, she now arrives with a Secret Service detail in tow.

#NYC subway , thinking of what's next to come #EDOmusic

Known to his friends and followers as EDO or “Electronic Dance Organization,” the musician/model grandson of Salvatore Ferragamo is a born and bred Italian who now resides in New York to work on his musical chops. When he’s not performing and producing pop and electronic music, he finds time to enjoy the best of Manhattan’s social scene, and, like a true New Yorker, even takes the subway.

This 25-year-old is the grandson of the iconic actor Gregory Peck and the son of model Cheryl Tiegs. Zack graduated from NYU in 2014, but like his mother, is a budding model in his own right. He and his father, Anthony Peck, also share a love for tailored menswear from Savile Row suiting purveyor, Huntsman, who exclusively outfitted Gregory Peck throughout his film career.

This daughter of Tom Selleck is a part of the horse jumping crew too, with several accolades under her cap. Though she is based in Hidden Valley, California, she often travels around the showjumping circuit, and to New Mexico where she runs a boutique horse breeding farm with her father.

Model/artist Cuba Tornado Scott first stepped out last year in the pages of Garage Magazine, the Vice-owned publication created Dasha Zukhova, and since then has appeared in a stack of fashion glossies who tout her lineage as the eldest granddaughter of director Ridley Scott, along with siblings Buster and Fleur Scott. Like some of her list co-stars here, Miss Tornado Scott is also known to ditch her edgy looks in favor of equestrian gear to compete in horse jumping.

15. Jihad Harkeem
https://www.instagram.com/p/BSt6EXGhUvm/
A graduate of Avon Old Farms and Fordham University, Jihad Harkeem is an aspiring fashion editor and regular fixture on the late night club scene hosting weekly bashes at Paul Sevigny’s duo of nightlife boîtes—Paul’s Casablanca and Paul’s Baby Grand—where he can often be found dancing atop a banquette shirtless with his fellow party pals. 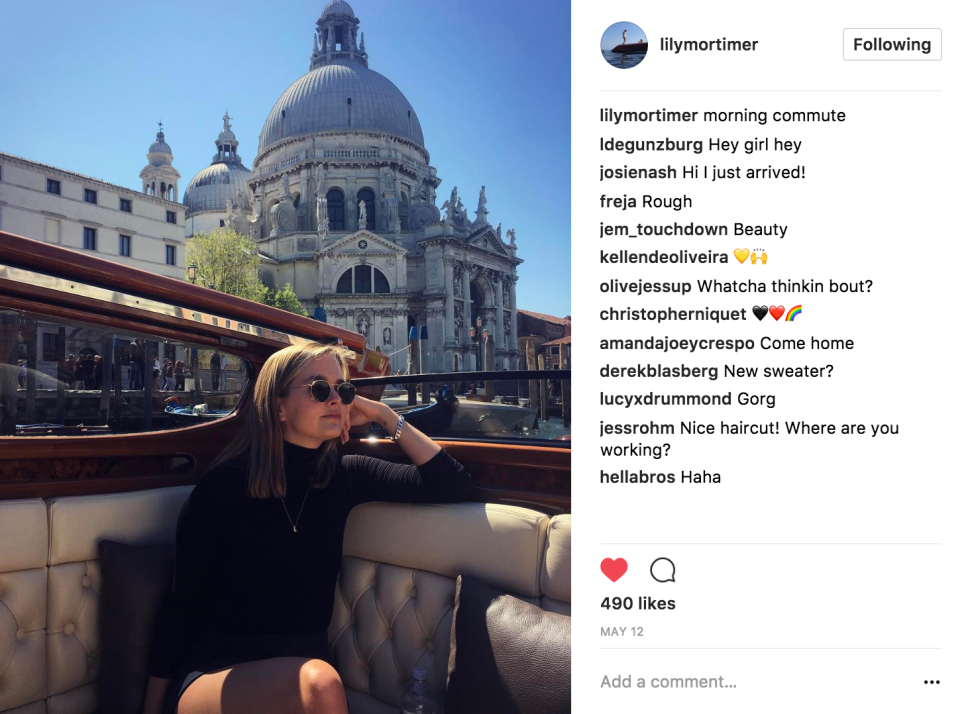 The 26-year-old member of Manhattan’s storied Mortimer family is an art obsessive currently working for Gagosian Gallery as an assistant to director Chrissie Erpf and as a gallery liaison for artists Joe Bradley, Harmony Korine and Jean Pigozzi. Before graduating from the College of Charleston in 2013, Mortimer also held a handful of coveted photography and fashion internships with the likes of Vogue, Vanity Fair, and with photographer Annie Liebovitz.

30-year-old art dealer Isabelle Bscher is the third-generation owner of Galerie Gmurzynska –  located in Zurich, St. Moritz, and Zug, Switzerland – where she spends half of her time. The other half is spent in New York, where she earned her Master’s Degree in Art History at Sotheby’s, and went on to represent modern masters like Donald Judd, James Turrell, and Yves Klein. Her younger brother, Lucas Bscher, is also dipping his toes into the family’s gallery business and has a love for car racing.

At 29-year-old, interior designer Max Sinsteden earned his stripes as an interior decorator under David Easton Inc. and Charlotte Moss before teaming up with Catherine Olasky, a former protégé of Bunny Williams, to form Olasky & Sinsteden in 2009. Since then, the duo, separated by just under a decade in age, have amassed a client list that rivals their seasoned counterparts.

In London with my favorite @g_mort

The son of Hard Rock Café founder Peter Morton is also a rising restauranteur. The 23-year-old is yet another well-known name involved in the Cha Cha Matcha craze, which he started alongside NYU classmate Conrad Sandelman, after the two met in business management and hospitality classes.

Amazing experience yesterday speaking at the World Ocean's Conference, hosted by the United Nations Environmental Programme at the Sustainable Development Goals Media Lounge. Youth engagement is hugely important in shaping the future of our oceans – we have to leverage the assets we have to bring together the people we know and love to create a swell of change which will lead to cleaner waters, cleaner food, healthier people, and a healthier planet. SDG14 is focused on life below the waves, because what happens below the surface affects things everywhere. Remember – your choices matter – #OurChoicesMatter

Hotel magnate Barry Sternlicht is perhaps known best for his creation of W and Starwood Hotels, but today the billionaire is invested primarily in his newest earth-friendly hotel concept, 1 Hotels. Like his father, James Sternlicht is a nature lover, and an advisory board member of clean ocean initiative Oceanic Global. The 24-year-old Greenwich, Connecticut native also has an interest in nightlife, and while still a student at Dartmouth College in August 2012 opened his own electronic dance music agency, RUN-EDM Inc.