June 8, 1967 was the worst day in the history of the National Security Agency. On that date, Israeli airplanes and torpedo boats mauled and nearly sank an American spy ship in international waters, killing or maiming most of its crew. This tragedy appears as a footnote to Israelis, an unpleasant sideshow of their victorious Six Day War, while official Washington preferred the embarrassing episode be forgotten. But NSA has never let the Liberty and her ill-fated crew disappear from memory altogether.

The USS Liberty was owned and operated by the U.S. Navy, which euphemistically referred to her as one of its Technical Research Ships, but she really worked for NSA. A converted World War Two freighter, the Liberty was barely a warship, possessing minimal armament for self-defense, and her mission was very hush-hush. She sailed the world collecting signals intelligence on behalf of her bosses at Fort Meade, Maryland. Her hull contained a large top-secret room where sailors of the Naval Security Group, NSA’s Navy component, intercepted and translated foreign communications.

In the mid-1960s, the Liberty sailed from crisis to crisis, wherever NSA needed her on station to collect SIGINT, and the beginning of June 1967 found her off the coast of west Africa. However, the rapidly deteriorating situation in the Middle East required her dispatch to the eastern Mediterranean, where war was about to break out again between Israel and her Arab neighbors.

On the fateful morning of June 8, the Liberty was sailing almost 30 miles north of the Sinai Peninsula, a war zone. By this point, the Six Day War’s fourth day, Israel was well on its way to defeating the combined forces of Egypt, Syria and Jordan, an epic victory that changed the map of the Middle East. The Liberty was in position to monitor possible Soviet movements, since there was concern in Washington that Moscow might come to the aid of its humiliated Egyptian client. The Cold War was still very real and as a result most of the Naval Security Group linguists aboard were specialists in Russian and Arabic—not Hebrew.

A half-century on, considerable debate persists about what really happened to the Liberty on June 8, but the essential facts not in dispute are these. Throughout the morning, several Israeli warplanes individually approached the U.S. Navy vessel, in some cases circling above the Liberty, in an apparent reconnaissance effort. Just before 2 p.m., two Israeli Air Force Mirage fighter jets raked Liberty’s decks with cannon fire. They were soon joined by three Israeli Mystère attack jets which executed multiple attack runs on the American ship, offering cannon blasts, rocket fire, and even napalm. The jets made repeated low-level attacks on the nearly defenseless Liberty for about 20 minutes. By the time they ceased, Liberty’s radars and communications gear were destroyed, nine Americans were dead or dying, and dozens more were wounded.

Shortly before 2:30 p.m., three Israeli Navy torpedo boats approached the Liberty, which was burning and littered with maimed sailors. They soon made an attack run on the wounded vessel, launching several torpedoes, only one of which found its target. That hit, however, landed right in the NSA-run top-secret SIGINT facility, incinerating it and killing 25 Americans. The torpedo boats then approached to rake the foundering ship with cannon and machine gun fire, culling sailors trying to save their vessel and wounded shipmates.

After that, the Israelis backed off, leaving the Liberty to sink. That she did not go under, despite a torpedo hit that nearly broke her hull in two, leaving a hole almost 40 feet across, can be attributed to the heroism of her crew and the leadership of her skipper, Commander William McGonagle, who led damage control efforts despite his own serious wounds. For his remarkable courage under fire, McGonagle would receive the Medal of Honor, the nation’s highest valor decoration, while other Liberty sailors were awarded other high decorations, including two Navy Crosses (both posthumously) and 11 Silver Stars (three posthumously).

The U.S. Navy’s powerful Sixth Fleet, which had considerable presence in the Mediterranean, was slow to come to the Liberty’s aid, despite her repeated distress calls. The first warship to reach the crippled ship was a Soviet destroyer, which reached the scene before any American vessels did. The Liberty limped to Malta and was taken out of service, too badly damaged to be repaired. She was officially removed from the fleet in 1970 and scrapped three years later.

From the outset, Israel insisted the incident was all a mistake, a tragic case of the fog of war. Israeli defense officials insisted they had confused the Liberty with an Egyptian vessel half her size. In Washington, the administration of President Lyndon B. Johnson was eager to accept Israel’s apology and offer to compensate the families of the dead. The White House didn’t want a public fuss with an ally, much less one which had many friends and donors in Johnson’s own Democratic Party. Neither was the navy eager to showcase its failure, above all Sixth Fleet’s fateful refusal to give the exposed Liberty a warship escort, as McGonagle had requested. Official Washington therefore did its best to pretend the whole regrettable incident had never transpired.

In a typical case, McGonagle received his Medal of Honor not from the president in a White House ceremony, as was the norm, but from the Navy secretary in a nondescript room at the Washington Navy Yard. Liberty survivors were sworn to secrecy, with threats of grave repercussions if they spoke to the media or the public about what transpired on June 8, 1967. Many grew resentful at their treatment, particularly after so many Liberty sailors had been killed or injured. In all, 34 men died and 171 were wounded, many of them maimed for life, 205 Purple Hearts in all—a staggering percentage of the Liberty’s crew.

Time moved on and the Liberty issue became polemical as major facets of the case remained unresolved. Nobody in Washington who desired a political future wanted to discuss the events of June 8, 1967 so the issue faded from the newspapers. Some survivors sensed a cover-up. While their physical wounds eventually healed, for many of the men who served on the Liberty, their mental anguish never abated.

One survivor, Jim Ennes, who had been the Liberty’s Officer of the Day on that terrible day, became an activist and published a book in 1980 which was sharply critical of both Israel and the U.S. Navy, arguing that the Israeli attack had been intentional—a fact which the American government had conspired to obscure.

A counterpoint came in 2002 with the publication of a book on the case by Jay Cristol, a Federal judge and Navy Reserve lawyer. Cristol argued that the attack on the Liberty was precisely the mistake Israel had always said it was. However, his book was more a detailed legal brief for the Israeli version of the case than a balanced effort to resolve unanswered questions.

The best book on the Liberty incident was published in 2009 and was authored by James Scott, an award-winning journalist and the son of a Liberty survivor. Years of meticulous research went into the book, and Scott uncovered ample new evidence which raises awkward questions for both Tel Aviv and Washington. In the end, Scott demonstrates that there was indeed a high-level cover-up about the events of June 8, 1967, and the public has never been told the full truth of the Liberty incident.

For its part, NSA has never believed the “official” version of what happened to its doomed spy ship. Lieutenant General Marshall Carter, the agency’s director in 1967, from the outset was contemptuous of Israel’s claims of a mere accident. Oliver Kirby, who was NSA’s deputy director for operations, i.e. its SIGINT boss, when the Liberty was attacked, decades later stated that NSA possessed intercepts which left no doubt that Israeli pilots who attacked the vessel knew it was American. In 2003, Kirby professed his “absolute certainty” that Israel knew the Liberty was a U.S. Navy ship, based on SIGINT intercepts he had seen. Several other top Intelligence Community officials over the years have said similar things. For his part, Richard Helms, who was the CIA’s director at the time of the Liberty incident, stated in 2002 about the Israeli attack: “It was no accident.”

In 2007, NSA released a substantial trove of declassified materials on the Liberty incident, including reports, assessments, studies, and some SIGINT. None of those reports demonstrate that Israeli pilots and sailors knew the vessel they were attacking was American. Clearly the SIGINT Kirby referenced—which many other IC insiders over the years claim to have seen, including people at the agency whom I knew—has not been released by NSA to date.

Therefore, the Liberty case will continue to linger with many basic questions about what happened on June 8, 1967—and why—unanswered. Survivors are now old men, and with their passing such questions may become unanswerable. Not long before his death in 1999, retired Captain McGonagle broke his three decades of silence on the tragedy. Speaking at a memorial at Arlington Cemetery, where several of the Liberty’s dead are interred, McGonagle stated:

For many years, I had wanted to believe that the attack on the Liberty was pure error. It appears to me that it was not a pure case of mistaken identity. I think it’s about time that the state of Israel and the United States government provide the crew members of the Liberty and the rest of the American people the facts of what happened and why it came about that the Liberty was attacked.

Two decades have now passed since Captain McGonagle made his plea, wearing his navy dress whites with the Medal of Honor around his neck, and we are no closer to knowing the full truth of this troubling case.

NSA remembers the brave men of the USS Liberty and their sacrifice, even if the American public has long forgotten. The National Cryptologic Museum, which is adjacent to the agency’s sprawling headquarters complex, possesses a display about the ship and its crew, including Captain McGonagle’s Medal of Honor, as well as the large U.S. flag which the Liberty flew during the attack, tattered by Israeli fire.

Nearby is a full-size replica of NSA’s memorial wall – the original is a few hundred yards away inside agency headquarters, inaccessible to the public – which lists the names of 176 Americans who gave their lives on duty for NSA. The biggest group comes from the USS Liberty, 34 names in all – 31 sailors, two Marines, and one NSA civilian. Above all their names is inscribed a memorable description of their work and their fate:

THEY SERVED IN SILENCE 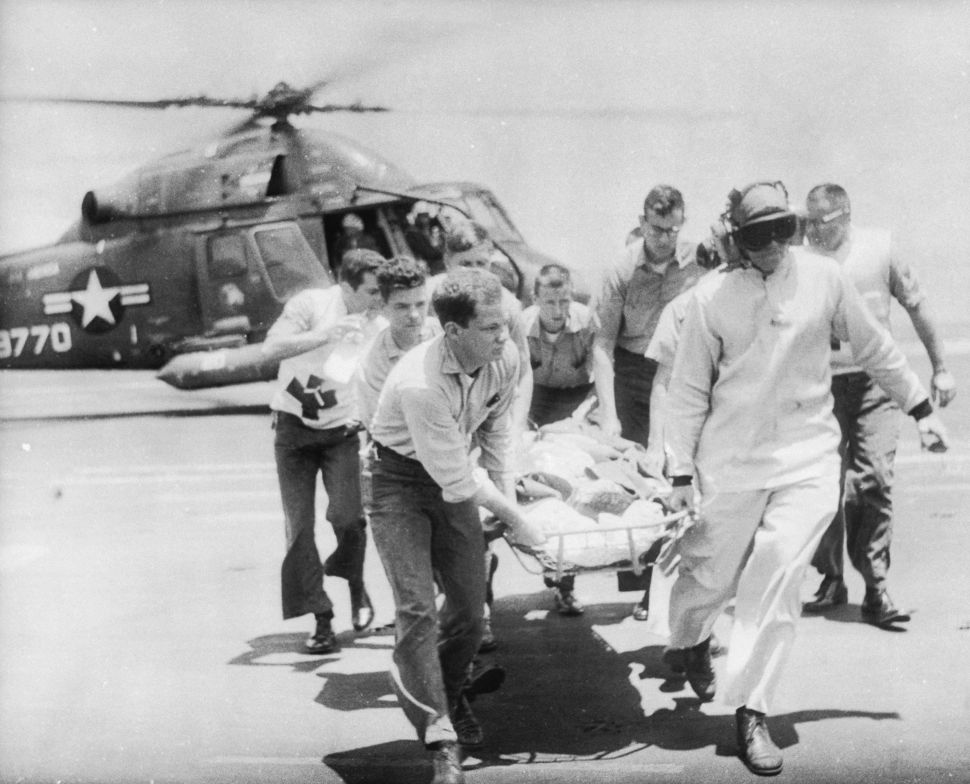