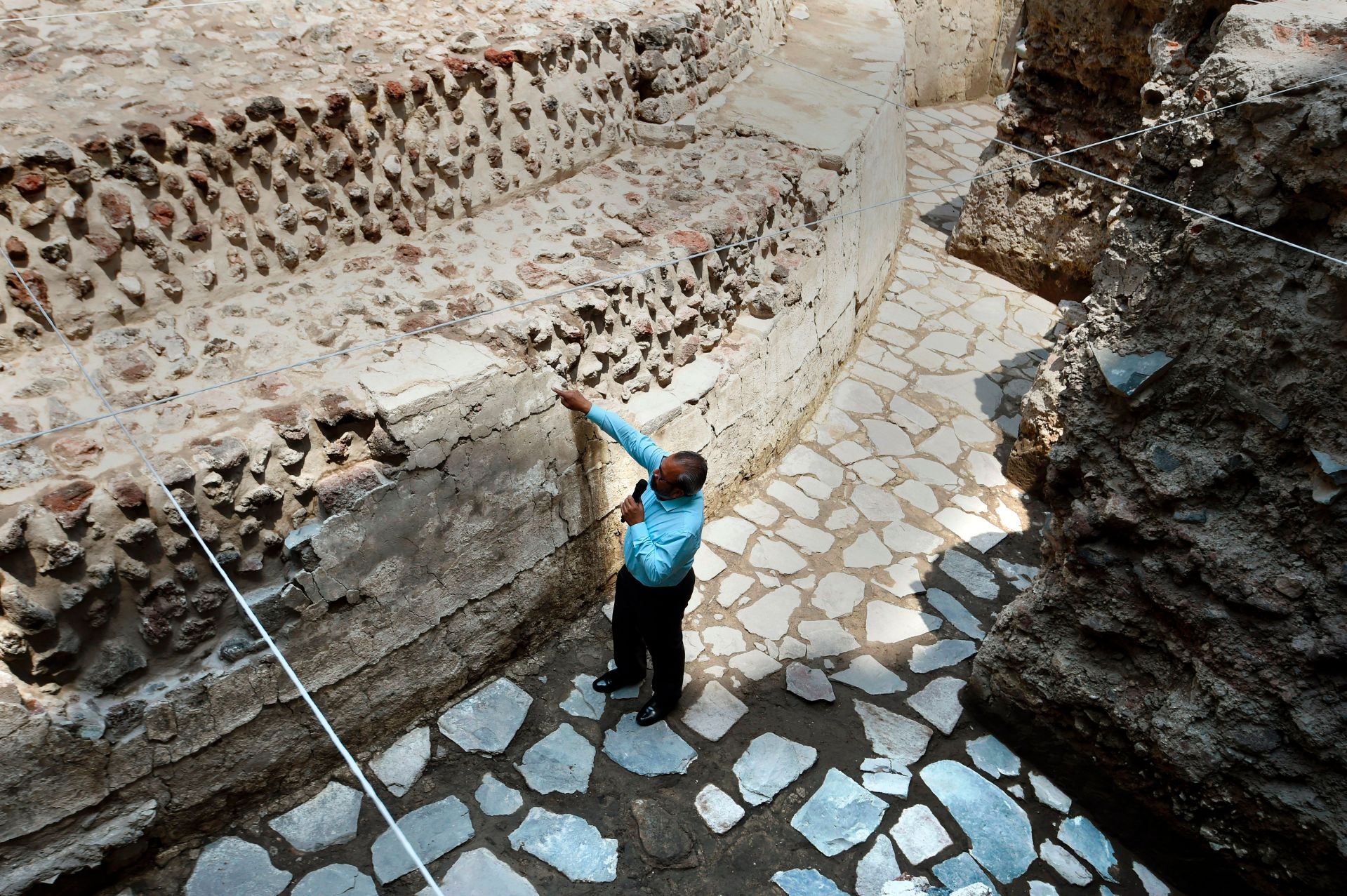 Mexican archaeologist Raul Barerra gives an explanation during a tour by the archaeological site of the ancient Aztec temple of Ehecatl-Quetzalcoatl and ritual Ball Game recently discovered in downtown Mexico City, on June 7, 2017.
ALFREDO ESTRELLA/AFP/Getty Images 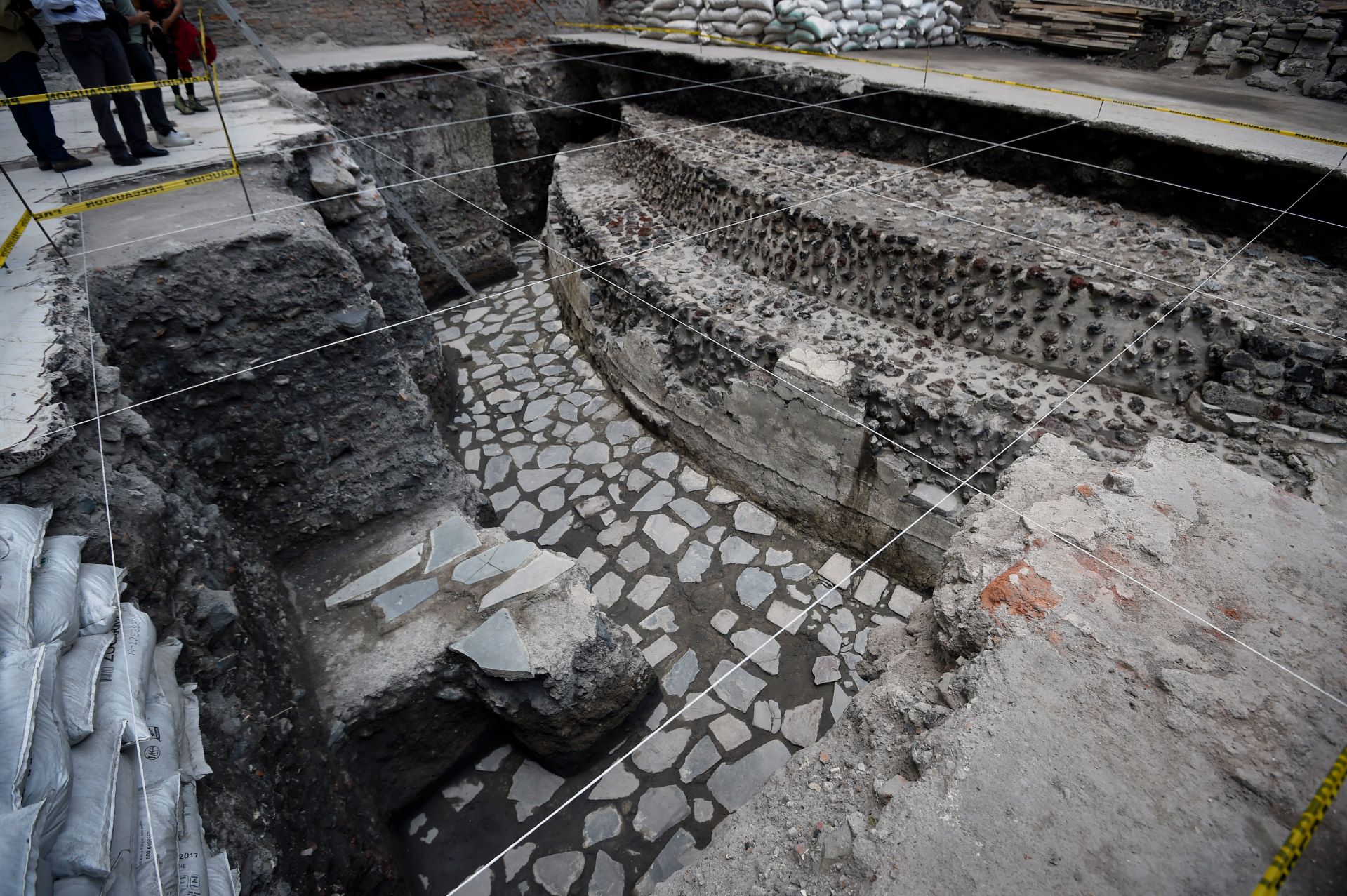 View of the archaeological site of the ancient Aztec temple of Ehecatl-Quetzalcoatl and ritual Ball Game.
ALFREDO ESTRELLA/AFP/Getty Images 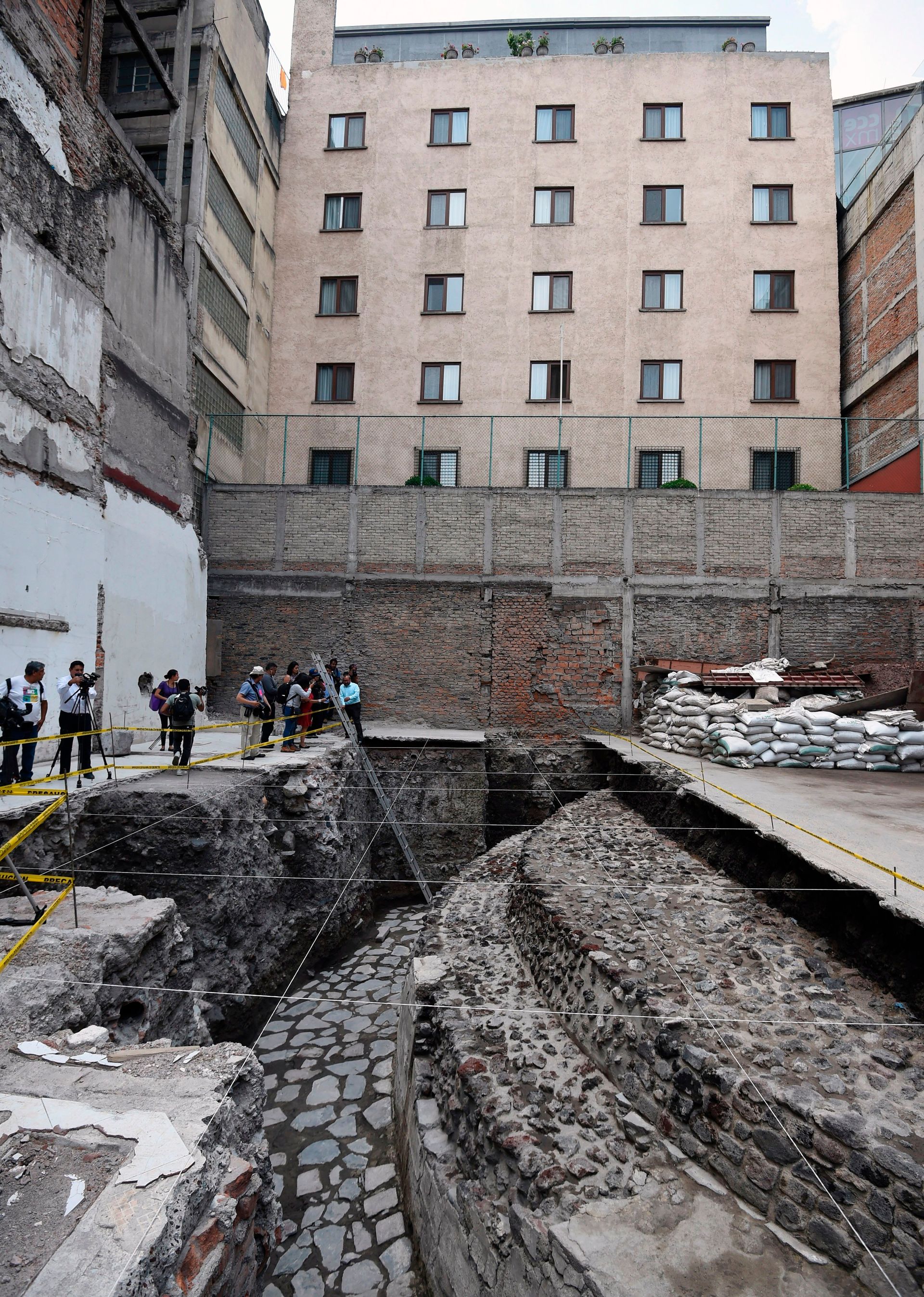 Another view of the site.
ALFREDO ESTRELLA/AFP/Getty Images 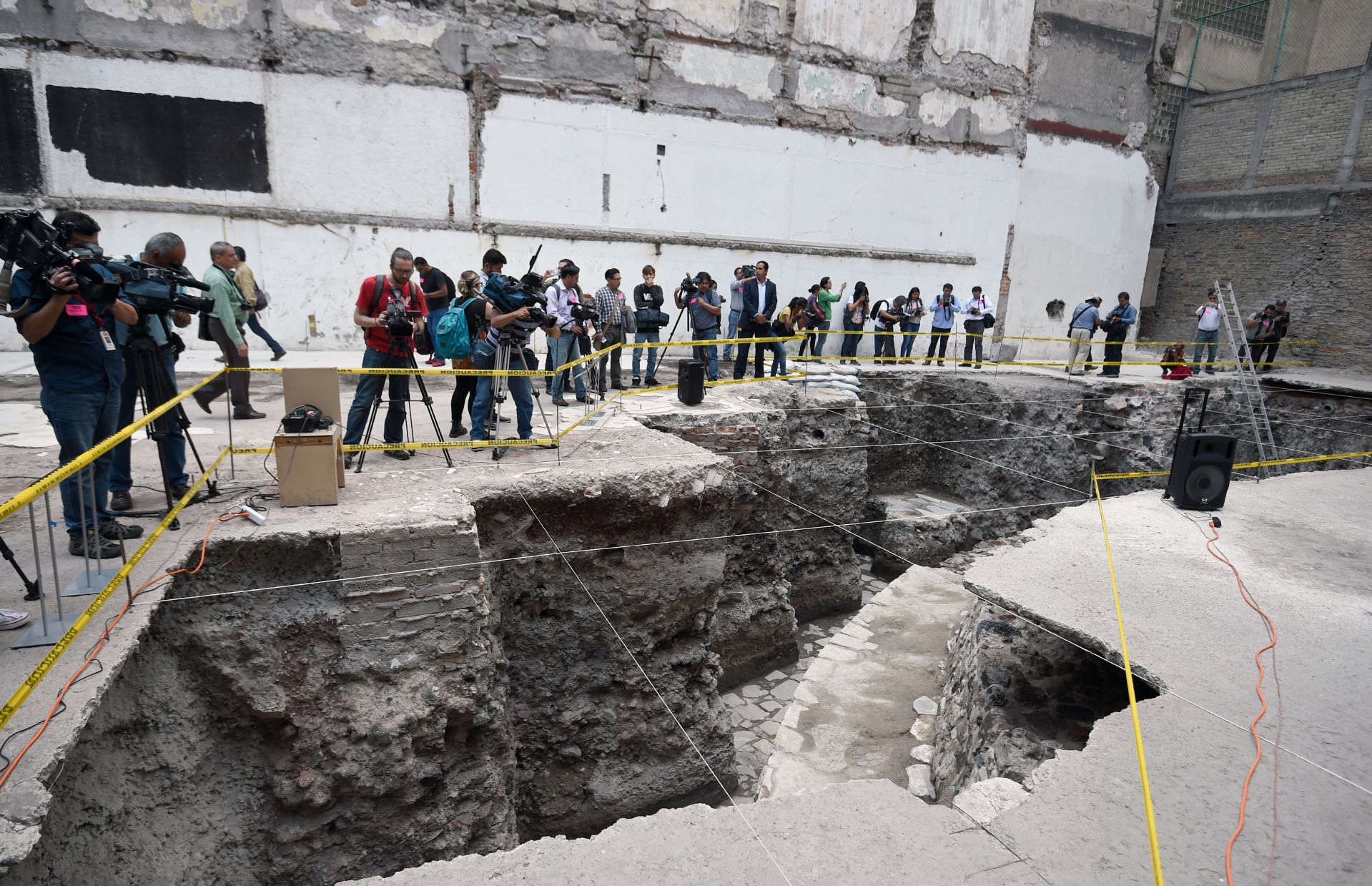 Journalists work during a tour by the archaeological site.
ALFREDO ESTRELLA/AFP/Getty Images
Advertisement 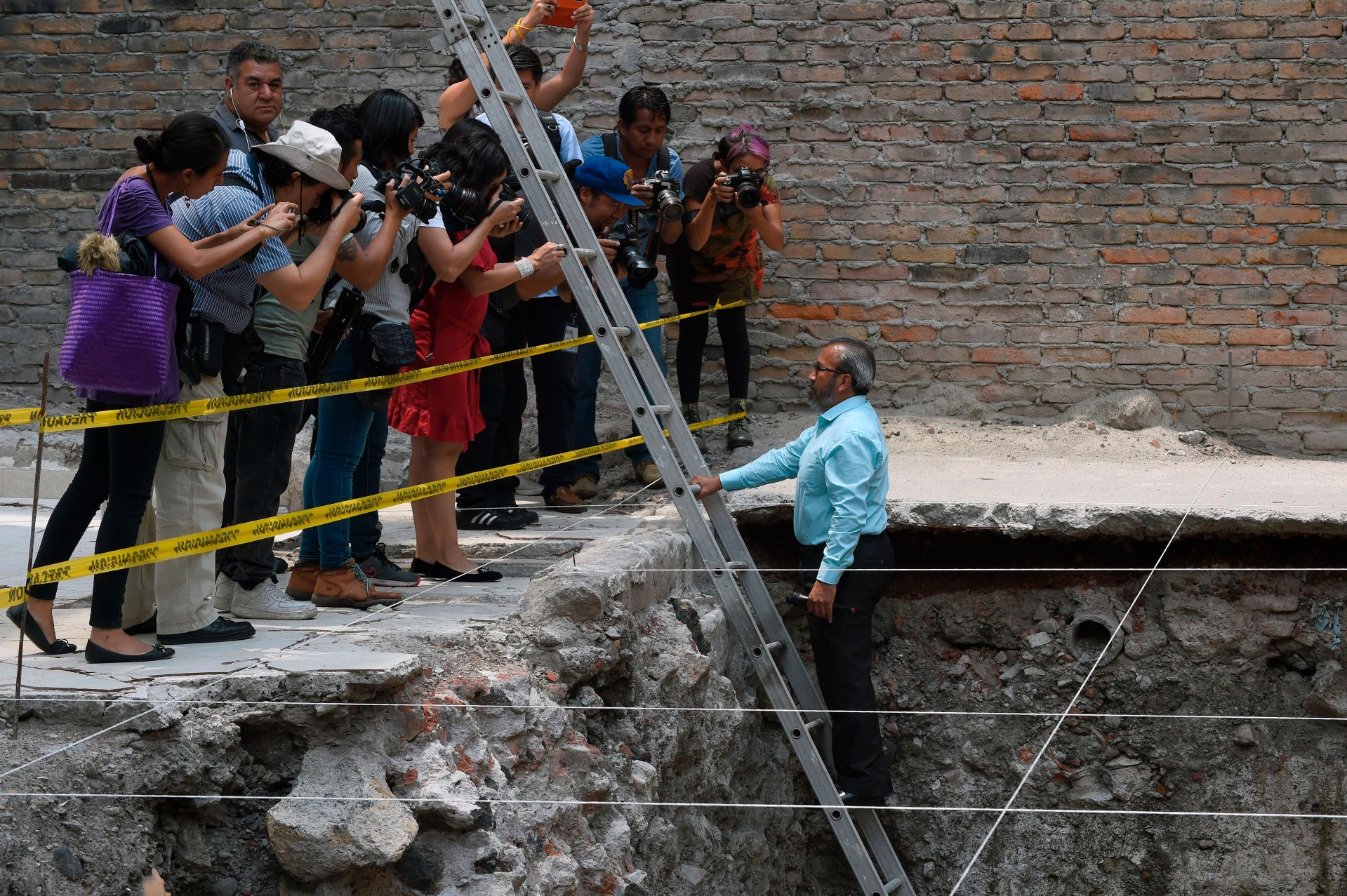 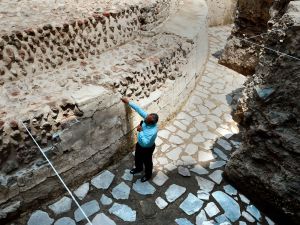 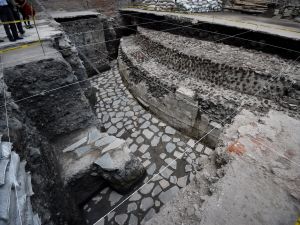 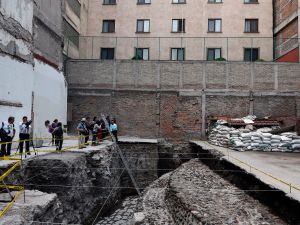 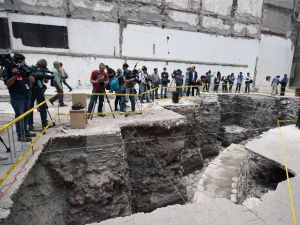 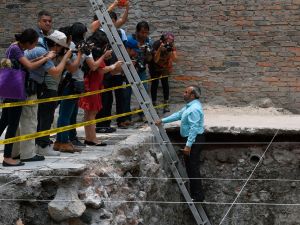 Beneath a 1950s hotel, and adjacent to colonial-era Catholic cathedral, archaeologists have discovered the long-lost ruins of a once magnificent circular Aztec temple dedicated to the wind god Ehecatl, a ritual ball court and 32 male neck vertebrae, reports Reuters.

The finds correspond to first-hand accounts by Spanish explorers who visited the Aztec capital Tenochtitlan, said head of Mexico’s anthropology and history institute Diego Prieto to Reuters. “Due to finds like these, we can show actual locations, the positioning and dimensions of each one of the structures first described in the chronicles,” said Prieto.

The accounts feature descriptions of a young Aztec leader Moctezuma playing ball against an elderly king and losing, according to Reuters. The loss was interpreted as a sign of the Aztec Empire’s eventual collapse, which did occur not long after when the Spanish conquistador Hernan Cortes conquered Tenochititlan in 1521.

Not far from the court, archaeologists uncovered a collection of human remains, which archaeologist Raul Barrera identified as a form of offering related to the ball games. “The vertebrae, or necks, surely came from victims who were sacrificed or decapitated,” said Barrera.

The temple itself, which is believed to have been built between 1486 and 15012, during the reign of Emperor Ahuizotl, was rounded in shape and would have been unique among the more common square temples of the period, reports Reuters. The top of the temple may have been built to look like a coiled snake, and its doorways like that of a snake’s nose, according to archaeologist Eduardo Matos.

Plans for a museum to be built on the site will begin once excavation on the temple and its surroundings are finished.